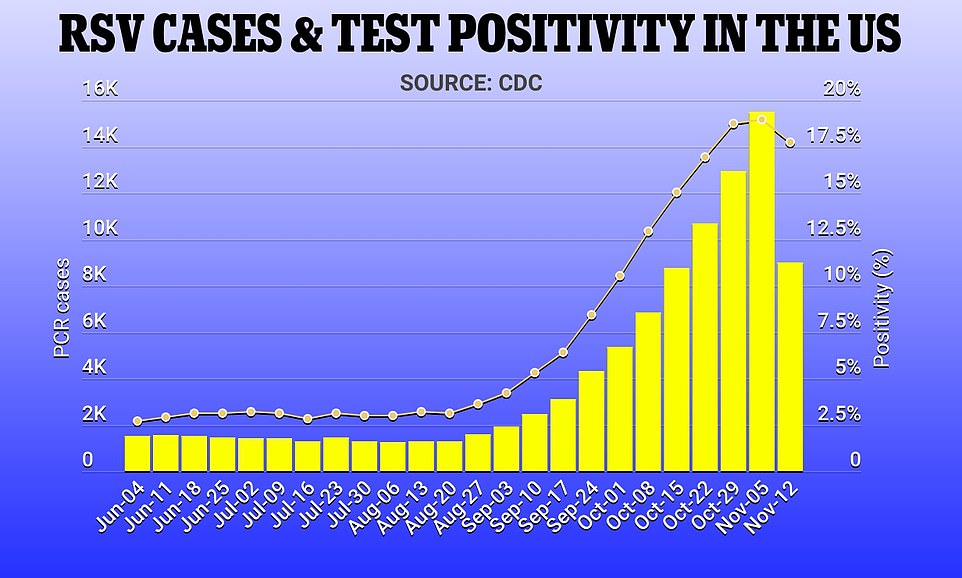 America is short of four major antibiotics and respiratory medicines for children as seasonal bugs come back with a bang after being suppressed during lockdowns.

Health officials have stated that there is a shortage of amoxicillin, an essential antibiotic used to treat bacterial infections such as pneumonia, respiratory infections and strep throat.

But doctors on the ground also report dwindling supplies of Augmentin — an antibiotic that uses amoxicillin in addition to clavulanic acid — Tamiflu, the most commonly used flu drug in U.S. hospitals, and albuterol, an inhaler for asthma and to relieve other lung symptoms.

Desperate parents report going from pharmacy to pharmacy for hours trying to track down their children’s medications.

The shortages are caused by rising demand. Several children’s hospitals have already reached 100 percent capacity as rates of RSV and flu – both of which kill young people – reach their highest level in a decade at this time of year.

A wave of lockdowns in 2020 and restrictive measures such as masking and isolation contributed to an unexpected drop in circulating viruses such as flu and RSV.

Many people’s immune systems aren’t prepared for viruses like RSV, meaning babies born within the past two years are likely to encounter the pathogen for the first time ever, leaving them highly susceptible to serious illness.

The CDC reported a new high of 15,476 new RSV cases during the week ending Nov. 5, with more than 17 percent of PCR tests for the virus coming back positive. 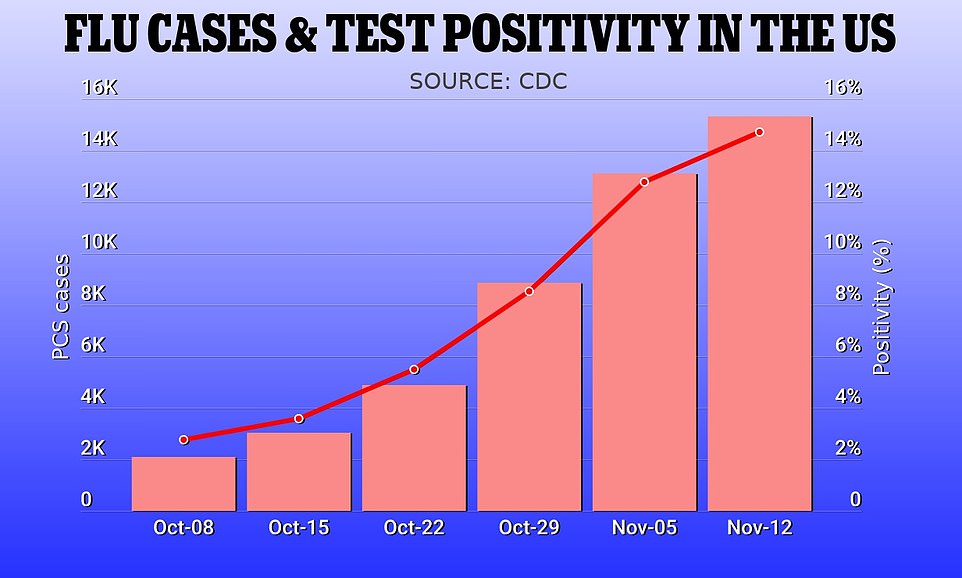 More than 15,000 flu cases were recorded during the week ending Nov. 12, a new high for this flu season, the CDC reports. More than 14 percent of the tests before came back positive 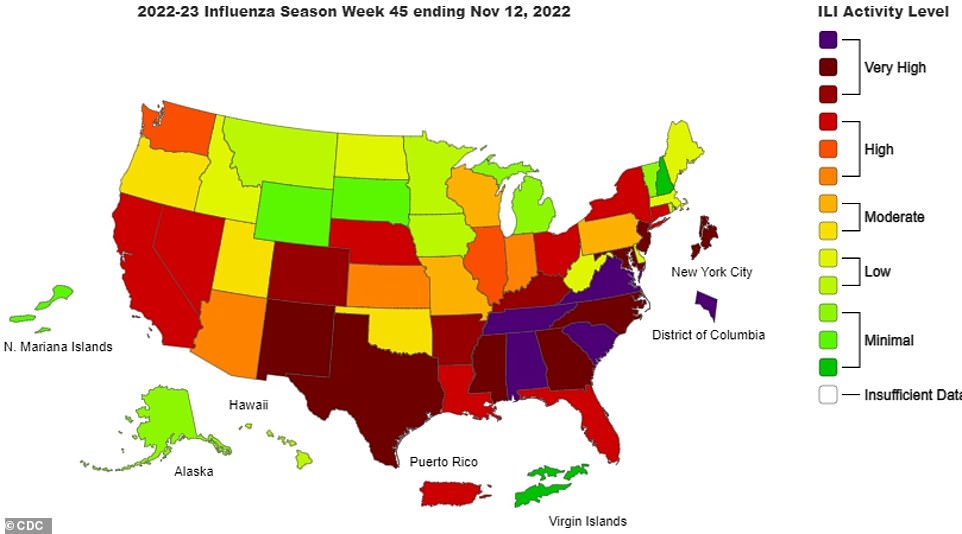 Four US states report the highest levels of flu activity, according to the CDC — Alabama, South Carolina, Tennessee and Virginia. A total of 14 states record at least ‘very high’ flu activity or more as recent US ‘triplemic’ continues 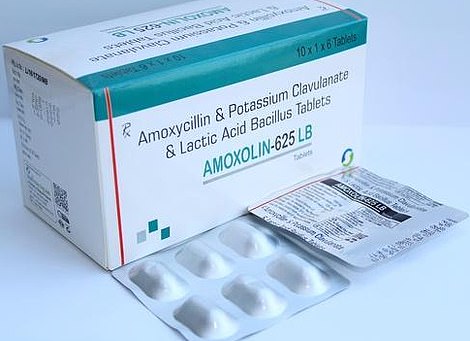 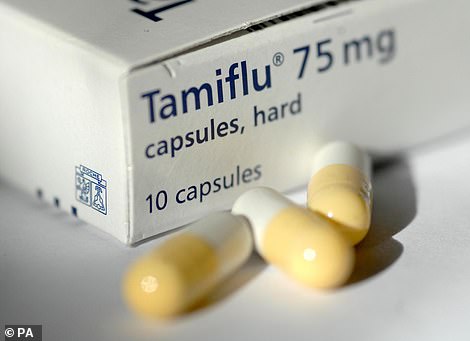 RSV usually only causes mild colds in more people, but the virus can be especially harmful to young children. The CDC reports about 500 pediatric deaths each year.

During the week ending November 5, a season high of 15,476 RSV cases was reported, a new season high.

The agency also reported 15,308 flu cases last week, the most of any week this flu season. Just under 15 percent of PCR tests for flu come back positive.

Combined with Covid, the current situation in which all three viruses are circulating has been described by some experts as a ‘triple-demics’.

Dr. Stacene Maroushek, a pediatric infectious disease specialist at Hennepin Healthcare in Minnesota, told CNN, “In 25 years of being a pediatrician, I’ve never seen anything like it.

“I’ve seen families that just don’t get a break. They get one viral illness after another. And now there’s the secondary effect of ear infections and pneumonias causing amoxicillin deficiencies.”

Dr. Renae Kraft, an Oklahoma pharmacist, told CNN that both generic and brand-name versions of Tamiflu are scarce in her area.

She said her pharmacy in the rural area had 20 people filled with a prescription for Tamiflu. The pharmacy didn’t have any in stock, and Dr. Kraft had to refer patients to a local Walmart.

This year’s flu season started earlier than usual and hit Americans quickly. Experts warned in September that the country was already recording figures that would normally not be seen until the peak in late December.

Experts are describing the situation as the worst flu season since the 2009 swine flu pandemic.

A shortage of the common antibiotic amoxicillin continues in the US as an increasing number of children are diagnosed with seasonal illnesses and more parents are forced to go out of work to care for them.

As pharmacies struggle to keep up with parental demand for amoxicillin due to an ongoing shortage that the FDA warned of several weeks ago, more and more Americans are having to stay home from work to care for their sick children.

More than 100,000 Americans missed work last month — an all-time high — because of childcare problems, many of them due to sick children and sick caregivers during the day.

The FDA initially blamed strong demand for the shortfall as cases of respiratory syncytial virus skyrocketed to unusually high numbers alongside seasonal spikes in strep throat, ear infections and other respiratory illnesses.

Infectious disease specialists say a number of factors, most notably a weakened immune system from the pandemic, are contributing to the recent spike in viral infections.

‘Pandemic babies’, who were protected from respiratory pathogens due to measures such as social distancing, are also now getting sick and the relaxation of mask mandates in schools is making it easier for viruses to spread, especially among people with weakened immune systems.

GoodRx.com — a telemedicine platform that tracks prescription numbers in America — reports that prescriptions for Tamiflu have hit 10-year highs at this point in the year.

Americans are six times more likely to use the drug now than in mid-November 2019, the last pre-pandemic flu season.

Antibiotics, often used to fight bacterial infections resulting from the flu rather than the illness itself, are also running out.

These drugs, such as amoxicillin and Augmentin, are not effective against viruses themselves, but children are at risk of contracting a serious infection from bacteria after recovering from a virus.

Amoxicillin is a stronger version of the well-known drug penicillin. It is one of the most commonly prescribed medications to children during flu season.

The Food and Drug Administration (FDA) warned in October that the drug was nearly unavailable, pointing to the surge in flu and RSV cases as the culprit.

Augmentin is an antibiotic that combines amoxicillin with another penicillin-derived drug called clavulanate. It is similarly used to treat post-viral bacterial infections that appear in some children.

It was difficult to obtain because of the shortage of amoxicillin.

Pharmaceutical companies often prepare their production of these antibiotics well in advance of flu season, when hospitals place orders for them at the beginning of the year.

In times when the demand for it far exceeds the available supply, there is little that can be done to quell the problems.

Some have also said that many of these prescriptions are inappropriate and should not have been written by doctors, exacerbating the shortage.

‘The manufacturers of amoxicillin hadn’t counted on that, so that led to shortages.’

Teva, an Israeli company that produces amoxicillin, said production of the drug will return from early December to February.

Hikma, based in the UK, told CNN it is currently working to boost production of the antibiotic.

According to the most recent CDC data, four states — Alabama, South Carolina, Tennessee and Virginia — all report the highest levels of flu activity.

Vanderbilt University Medical Center, which includes the largest children’s hospital in Tennessee, is at 98 percent capacity as of Tuesday.

A total of 14 U.S. states record “very high” flu activity or higher according to the most recent CDC data.

However, some experts hope that this increase will slow down.

Dr. James Antoon, an assistant professor of pediatrics at Vanderbilt University in Nashville, Tenn., told DailyMail.com last week that this increase could soon run out.

He said Vanderbilt is experiencing a leveling off of RSV cases, with the flu now replacing it as the main threat.

He does warn that weekly flu cases are likely to continue to rise as America approaches the end of the year.

Dr. Patrick Jackson, an assistant professor of infectious diseases at the University of Virginia, added last week that while things may get worse in the near future, the virus will eventually burn through the population.

“There are only a limited number of people in the population who are vulnerable,” he said.