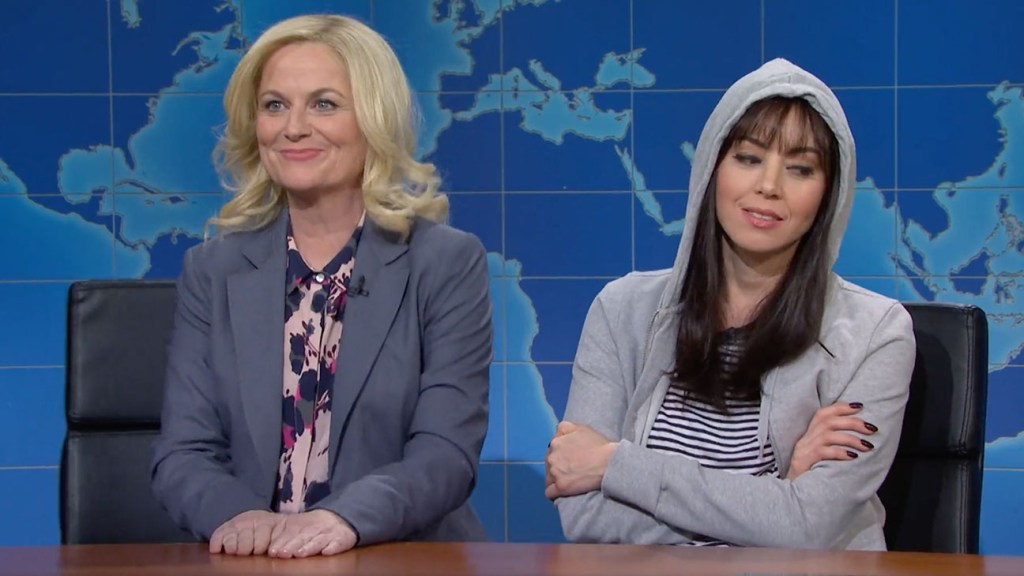 It was a Parks and recreation meeting.

Colin Jost introduced Plaza’s April as a longtime employee of the town of Pawnee, Indiana, who joined the show to talk about local government.

“I will if you stop yelling at me,” April tells Jost. “Okay fine. So yes, everyone should participate where they live. When you’re young, you should get a job as a garbage man or something.’

When asked if there were any other jobs, she replied in shock that he actually wanted her to list them.

“Fine. Driving a bus. You don’t have to be on time. Nobody cares,” she said. “Work for the water department. You can drain the reservoir and find all the bodies and murder clues, or just be a dog catcher and just say you couldn’t find one because if you work for local government, doing the bare minimum is your part.”

Jost then asked what if someone really wants to work hard to which she said she didn’t know and told him to ask her old boss. Cue Poehler’s Leslie, asking Jost a question about what it takes to run a federal agency.

“Well, all you have to do is show up every day and do your job,” she said. “But I want your brains on this job, on this show, because I used to watch this when Seth Meyers went it alone with no one else, and he made it look really easy.”

She dodges all his questions, saying that she and April couldn’t stay long because they had time tickets to the M&M store.