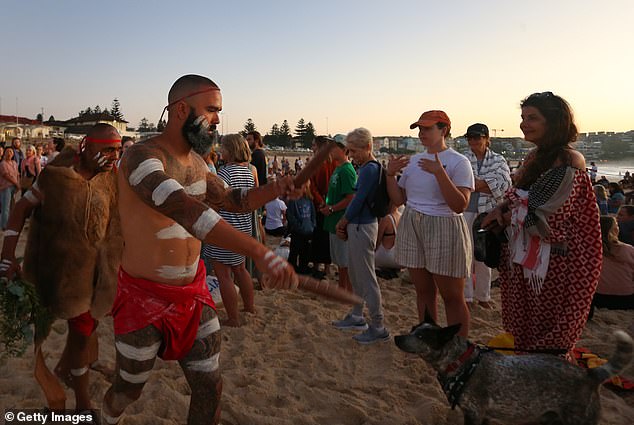 Pauline Hanson has slammed celebrity-backed calls for Australians to pay a weekly ‘rent’ tax to Aboriginal groups to honour their ancestral claim to the land.

The ‘Pay the Rent’ campaign wants homeowners to voluntarily pay a percentage of their income to Aboriginal elders without any government oversight or intervention.

Veteran Aboriginal rights activist Robbie Thorpe wants to see the rent tax set at one per cent of weekly wages after a similar scheme ran in Melbourne in the 1990s.

But the move has been slammed as ‘pro-apartheid madness’ by the One Nation leader who condemned the proposal as ‘deeply flawed and unjust’. 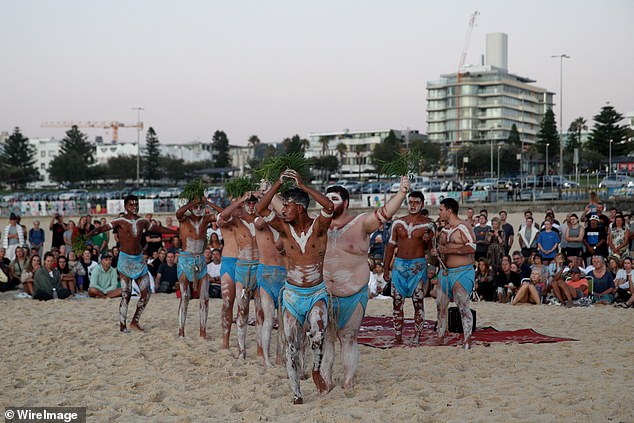 The ‘Pay the Rent’ campaign wants homeowners to voluntarily pay a percentage of their income to Aboriginal elders without any government oversight or intervention (pictured, Gamay Dancers at Bondi Beach)

‘This scheme is the worst type of discrimination, and it is not a solution to the problem of reconciliation between Indigenous and non-Indigenous Australians,’ Senator Hanson said.

The row comes as pressure mounts to give Aussies a chance to vote on changing the date of Australia Day, after it became synonymous with endless debate.

A rapidly rising number of Australians – particularly the young – now believe commemorating the arrival of the First Fleet in 1788 should not be celebrated.

Wild protests now mar the occasion, with hundreds of thousands again expected at protests in every major city across the country demanding to ‘change the date’. 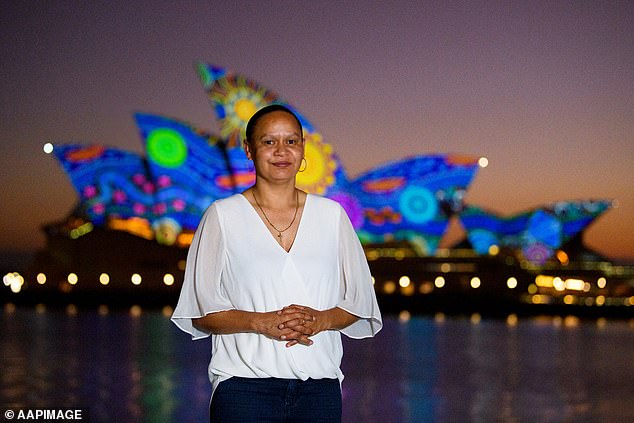 Veteran Aboriginal rights activist Robbie Thorpe wants to see the rent tax set at one per cent of weekly wages after a similar scheme ran in Melbourne in the 1990s (pictured, Kamilaroi artist Rhonda Sampson in front of her design on the sails of Sydney Opera House for Australia Day) 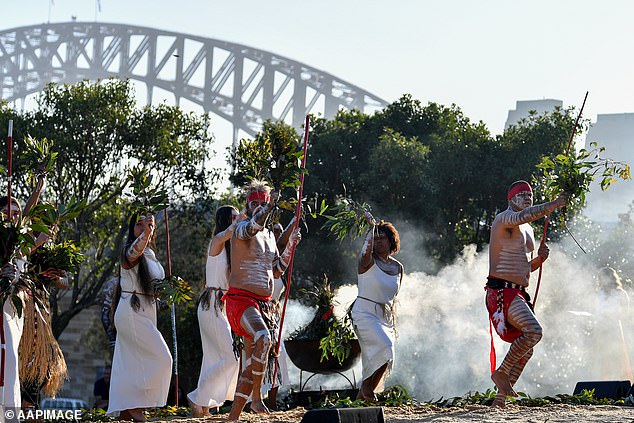 Nationals MP Matt Canavan wants to end the controversy ‘delegitimising’ the national holiday once and for all.

He believes the decision should be put in the hands of the people, rather than ‘woke’ and virtue-signalling companies, and has called for a national vote on the issue.

The staunch conservative has called on the federal government to introduce a plebiscite with the referendum on the Indigenous Voice to Parliament later this year. 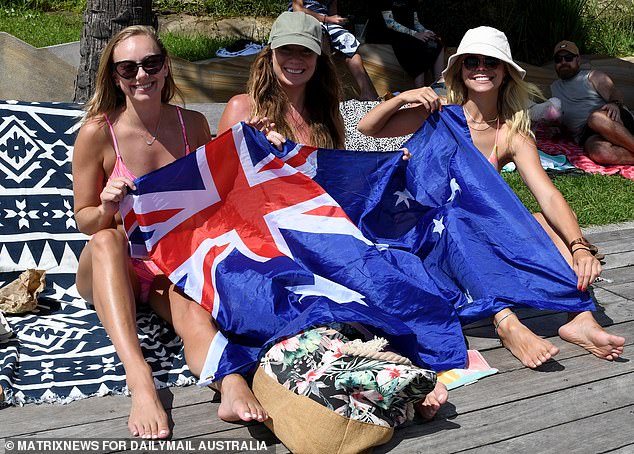 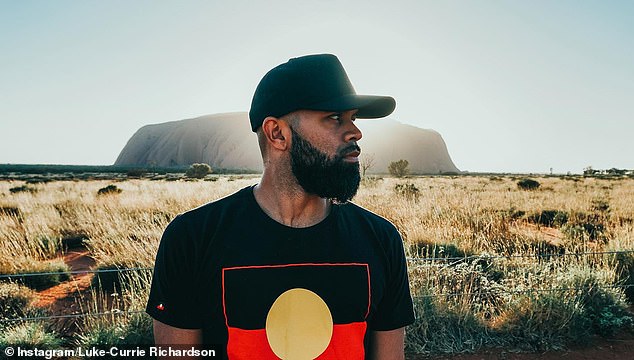 Luke Currie-Richardson says the ‘Pay the Rent’ would work as a type of land tax, based only on those Australians who own property paying rent to the traditional owners of that land

The rent tax scheme would seem millions of Australians thrown further into poverty as their rents balloon or families pay more on top of their ever-increasing mortgages.

The model would see Australian property owners pay a weekly ‘rent’ tax to Indigenous groups based on their ancestral claim to the land.

Any ‘Pay the Rent’ scheme, which is being promoted and backed by celebrities, would see homeowners voluntarily paying a percentage of their income to a body led by Aboriginal elders with no government oversight or intervention.

A rent tax proposal is not only unnecessary, it’s also deeply flawed and unjust.

Government statistics from last August that say the median Australian employee’s earnings were $1,250 per week.

The scheme could then be extended further to all users of the land – people having weddings or holding concerts would also be encouraged to hand over money.

The ‘Pay the Rent’ tax could apply to Indigenous people too. Anyone who owns property would pay because it would operate as a form of land tax.

‘We need to stop paying lip service to decolonisation and start paying the rent to the first nations people,’ Ford said.

Thorpe said: ‘Pay the rent from grassroots for grassroots. No strings attached to government agenda. It assists sovereign grassroots fight the many campaigns and struggles we face everyday.’

The organisers of a website which already collects this type of rent for traditional owners in Victoria, say the scheme could go further than taxing homeowners.

Australians could also pay extra rent for use of land that one-off events are held on such as weddings to festivals.

Rents for wedding could be calculated at one per cent of the total cost of a wedding, paytherent.net.au says.

With the average Australian wedding costing $54,000 to run, local traditional owners could receive a rent payment of $540 for each wedding.

When a music festival is held, the organisers could pay one per cent of the total income collected as rent. 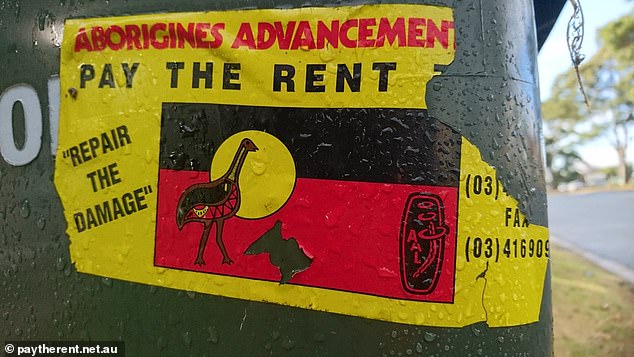 The organisers of a website, which already collects this type of rent for traditional owners in Victoria, says the scheme could go further than taxing homeowners 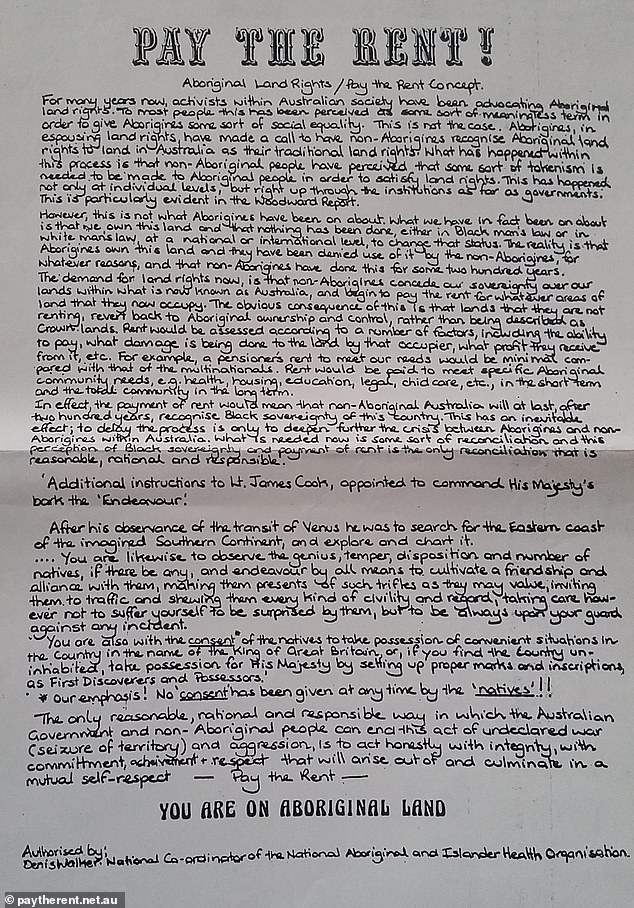 ‘Pay the Rent’ was developed as a policy by the National Aboriginal and Islander Health Organisation (NAIHO). Pictured above, a NAIHO document

The intention is the money collected could cover extra costs Indigenous people have for health, education and housing and reduce the need for government handouts.

Many consider it a solution to the unpopular and unsuccessful default practice of giving government ‘handouts’ to people in struggling communities.

Collecting rent for Aboriginal people based on the fact their ancestors claim  historical ownership is not a new idea.

It a rebirth of the ‘Pay the Rent’ plan which has been around for more than 50 years.

Since the 1970s there have been repeated calls by indigenous activists for non-Aboriginal Australians to pay the rent to local landowners.

Mr Thorpe’s Fitzroy ‘Pay the Rent’ group received payment from non-Aboriginal people who passed it on to their Aboriginal counterparts, who then used and distributed the funds as they saw fit.

Eventually it was developed as a policy by the National Aboriginal and Islander Health Organisation (NAIHO).

Both schemes eventually fell by the wayside.

But in recent years a new generation of activists are promoting ‘Pay the Rent’, including Lidia Thorpe. 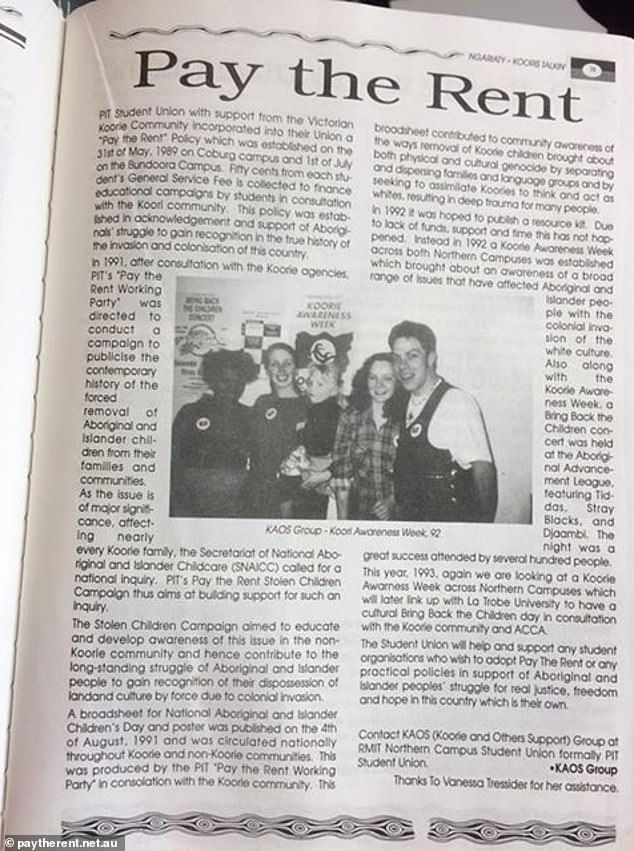 Collecting rent for Aboriginal people based on the fact they owned it before settlers is not a new idea. It has been discussed since the 1970s. 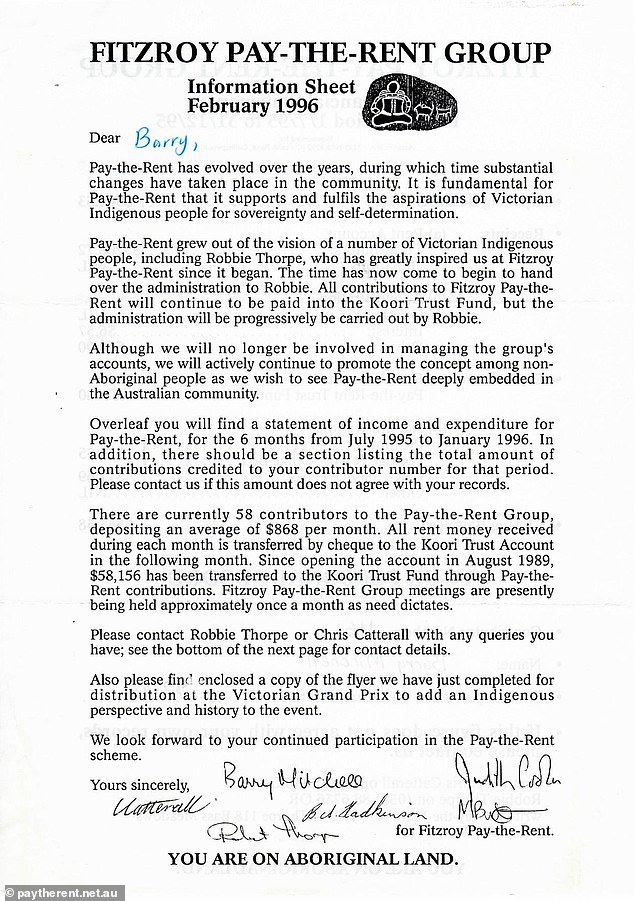 A Pay the Rent scheme operated in Fitzroy during the 1990s

Another is Luke Currie-Richardson, 30, a a descendant of the Kuku Yalanji and Djabugay peoples and former dancer with the Bangarra Dance Company.

Mr Currie-Richardson says the current model of ‘Pay the Rent’ would work as a type of land tax, based only on those Australians who own property paying rent to the traditional owners of that land.

‘[With] those funds, we can fund our own health, our own education, our own housing,’ Mr Currie-Richardson said.

He believes January 26 is an appropriate time for people to consider the choices they have to make a difference – and signing up to recurring ‘Pay the Rent’ instalments is one way of doing that.

WHY SOME ABORIGINAL AUSTRALIANS WANT YOU TO ‘PAY THE RENT’

Australia is founded on land that was stolen from Indigenous people. The wealth that has been generated by that theft is disproportionately distributed. All people who live here today, or who have lived here in the past, have not benefited equally from the continuing dispossession of Indigenous people. Indeed, many are deliberately and profoundly marginalised from power and the spoils of colonialism. However, some uncomfortable facts remain:

This land was never empty; the sovereignty of First Nations people was never ceded. Despite centuries of attempted genocide that continues to this day, Indigenous people have managed to hold onto and nurture culture and connections with country. At the same time, Indigenous health and wellbeing have been devastated; Aboriginal people are significantly more likely to be incarcerated, over-policed, to die in custody, for children to be separated from their family, and are more likely to die prematurely from preventable illnesses or to die by suicide. While governments and individuals have said Sorry to the Stolen Generations, they have taken no meaningful action towards making right, nor towards preventing further harm.

Paying the Rent is a step towards acknowledging these facts. It is part of a process that all non-Indigenous people – individually and collectively – need to enter into if we are to move towards justice, truth, equality and liberation for First Nations people.