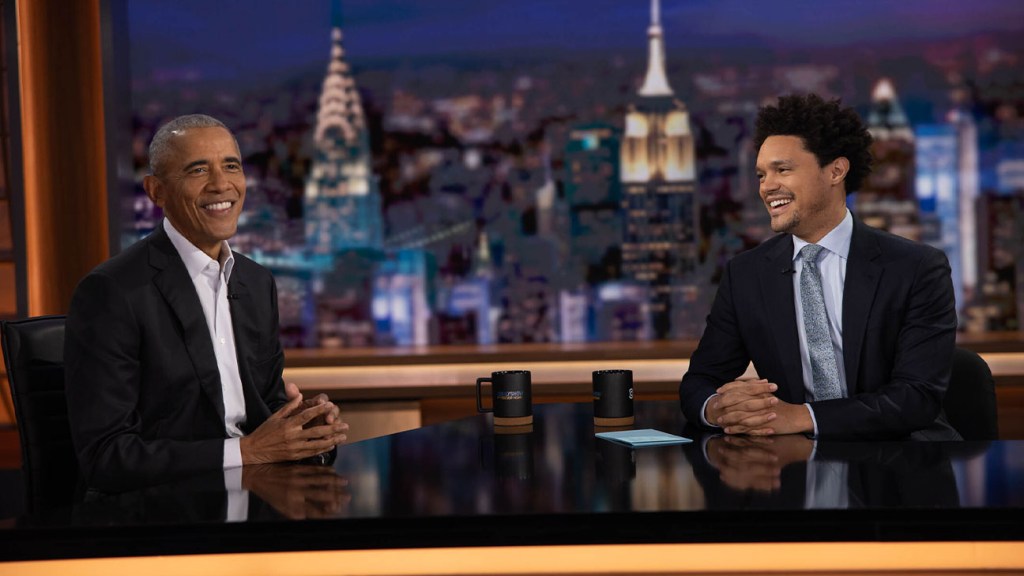 Barack Obama came by The daily show on Thursday to discuss why he believes youth turnout has made a huge difference in the midterm elections and how globalization, disinformation and media infrastructure have contributed to the weakening of democracy around the world.

Trevor Noah began his conversation with the former president by asking him two questions: whether he feels pressure to come out and support new Democratic candidates, and what he thinks it means for the party to always follow the campaign trail .

While it seemed like Noah was alluding to Obama being a major factor in Democratic victories this year, he closed that notion and countered by saying he thinks it had everything to do with the people who were on the run .

“The reason we did better than expected can be attributed to not me or anything I did… we recruited some excellent candidates,” he told Noah, while he saw the likes of Wes Moore, Josh Shapiro, John Fetterman and Mark Kelly cried out. “They are dedicated, passionate, down to earth, they connect with people,” he continued. “And so I mainly come in to put them in the spotlight.”

The second point Obama wanted to address was something that makes him “hopeful” for future elections.

“The second thing that happened during this midterm, and we’ve seen it now for three elections, so I’m starting to get pretty hopeful that this is a habit, young people vote,” he said. “It has often been commented on how I was beaten during the midterm elections during my presidency, and part of that was that the vote percentages were very low.”

He explained that during his tenure in the Oval Office, he felt that a lot of Democrats felt they were safe because he was in office, but once people like Mitch McConnell, John Boehner and others have power, it limits what a president can do. .

“I think that lesson has been learned,” Obama said. “[Donald] Trump comes in, and suddenly 2018, 2020 and now this one, you’ve seen young people come in, and they usually vote by a percentage of 70 to 30, 60 to 40 Democrat to Republican, and that makes a huge difference. I think their enthusiasm really drove this election.”

And when asked what he thought about some 170 election deniers taking office this year, the former president said he thought it was “funny” that those people don’t deny their own elections if they win. But he did see a positive result from their election.

“What’s important is that because of some really concerted efforts in many key states, some of the most blatant, prominent and potentially dangerous election deniers, they were beaten,” he said. “They’re defeated.”

However, the fact that election deniers were able to climb through the ranks and rise to office could reflect a bigger, broader issue around the world.

“The fundamental principles of democracy are being challenged,” Obama said, explaining that when people in the United States can’t accept losing, “it sends a signal around the world that democracy is weakening.”

Watch the full conversation below.