Bulging Fontanelle: The Warning Sign in These Before and After Photos ALL Parents Should Know 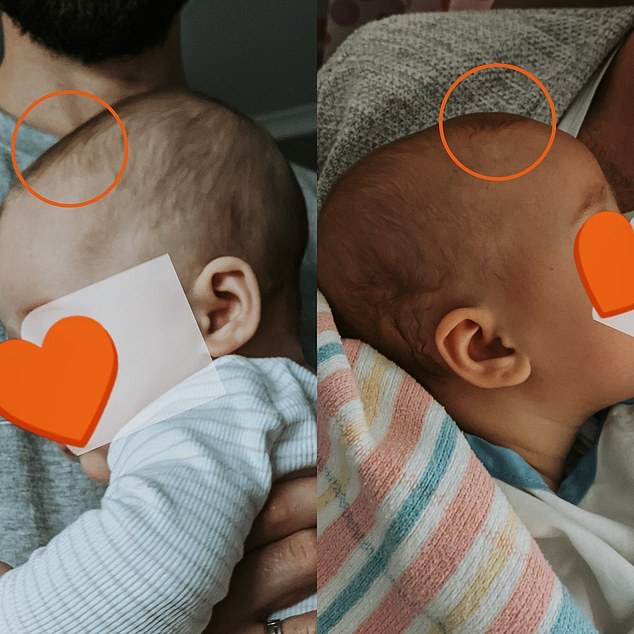 A paramedic has shared the seemingly innocuous sign that a baby needs “urgent medical evaluation,” and why it’s a “serious red flag” to see your baby’s soft spot elevated.

Nikki Jurcutz, CEO of parenting organization Tiny Hearts Education, shared two photos of a five-month-old baby’s head and asked her followers to “spot the difference between the two photos.”

In the first case, the baby’s head looks normal, while in the second case, the soft spot or ‘fontanelle’ is raised or ‘bulges out’ – which is an emergency and could indicate a serious health problem.

A paramedic has shared the seemingly innocuous sign that a baby needs “urgent medical evaluation,” and why it’s a “serious red flag” if you see your baby’s soft spot elevated (right) 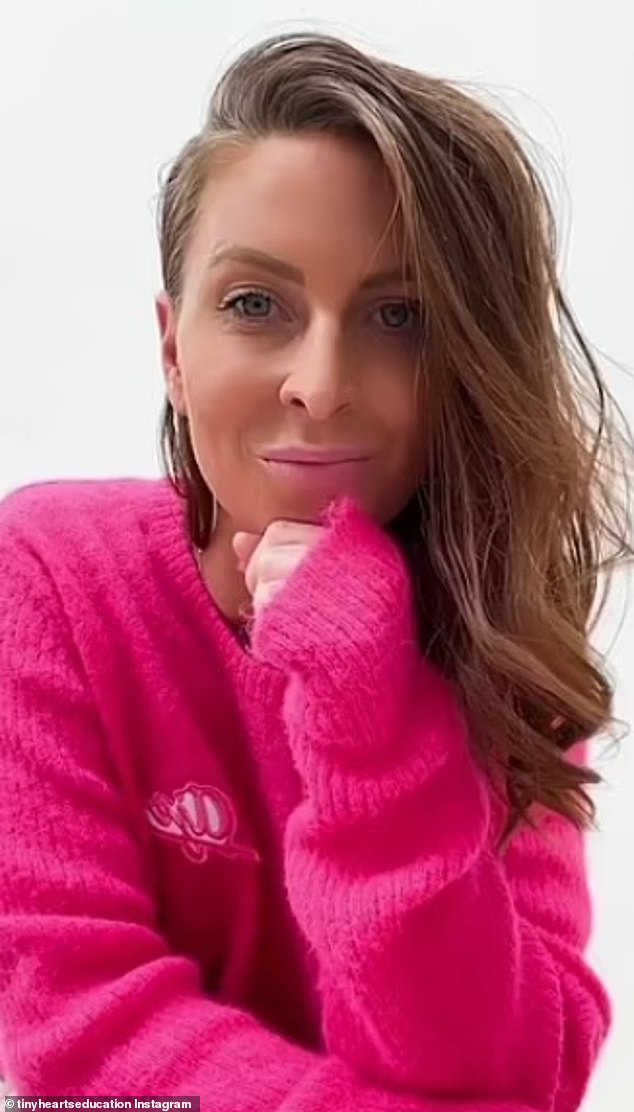 “The parents saw what they thought was a bulging fontanelle and went to the ER,” Nikkki continued.

Bubs started with antibiotics and antivirals, followed by blood work, ultrasound, MRI and a lumbar puncture.

She added, “Bub was diagnosed with a post-viral transient fontanel bulge.”

Nikki explained that “not enough parents know that a bulging fontanelle is a red flag that needs to be assessed immediately.” 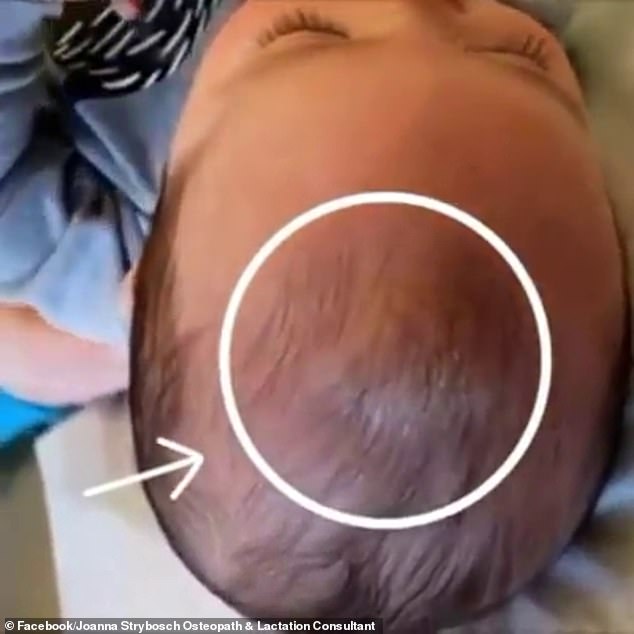 Nikki explained that “not enough parents know that a bulging fontanelle is a red flag that needs to be assessed immediately,” and that any change in appearance or texture should be monitored (raised fontanelle pictured)

What is a Bulging Fontanelle?

* A fontanel is more commonly known as a soft spot. When a baby is born, they usually have several fontanelles where the bones of their skull have not yet fused. A newborn has fontanelles on the top, back, and sides of the head.

* It is important for new parents to understand what a fontanel looks and feels like. A baby’s soft spot should feel relatively soft and curve inward very slightly.

* Changes in texture or appearance can be a sign of serious health problems. Parents should look for soft spots that curve outward on their baby’s head and feel very firm. This is known as a bulging fontanelle and can be a sign of brain swelling or fluid buildup in the brain.

* A bulging fontanel is an emergency. It could be a sign of increasing pressure in the skull, which could lead to damage to the baby’s developing brain. If your child experiences this symptom, seek immediate medical attention. 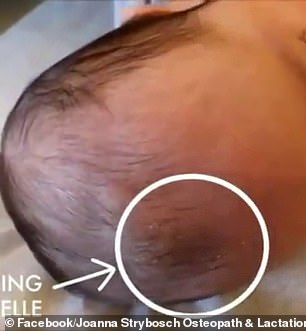 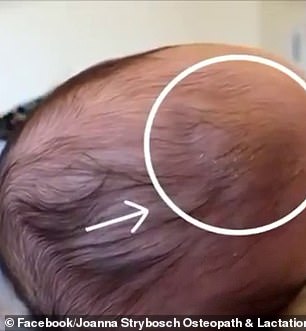 In another video, the paramedic emphasized that a baby’s soft spot should “feel relatively soft and curve very slightly inward” (example of bulging fontanelle pictured)

In another video, the paramedic emphasized that a baby’s soft spot should “feel relatively soft and curve very slightly inward.”

1. Calm them down and put them upright.

2. Assess the fontanel in this position.

3. If it still bulges out, go to the nearest emergency department.

“A bulging fontanel occurs when fluid builds up in the brain or when the brain swells,” Nikki said.

“Sometimes our little ones can have a raised fontanel, but that’s only temporary. Some examples of this are when the baby is lying down, crying or vomiting. This is no cause for concern.’

She said if you notice that your baby has an elevated fontanelle, there are three things you should do.

First, calm your baby and sit down, then assess the fontanelle in this position, and third, if it is still bulging, go to the nearest emergency department.

The paramedic that if your baby had something seriously wrong, they would usually have other symptoms besides the bulging fontanel.

These symptoms include fever, drowsiness and irritability.

“Common causes of a bulging fontanelle include meningococcal disease, severe infection and cerebral hemorrhage,” she said.

How to assess the severity of a baby’s illness

Here are the most concerning signs of illness:

* If your baby is less than three months old and has a temperature higher than 38 degrees Celsius.

* If your baby has a high pitched, weak or persistent crying.

* If your baby is pale or has mottled or blue skin.

* If your baby is lethargic, sleepy or unresponsive.

* If your baby is not drinking normally and has fewer wet diapers.

* If your baby is not breathing normally.

* If your baby has a rash that does not fade when pressed.

* If your baby has a bulging fontanelle (soft spot on top of the head).

If your bub is like any of these, seek medical attention as soon as possible. 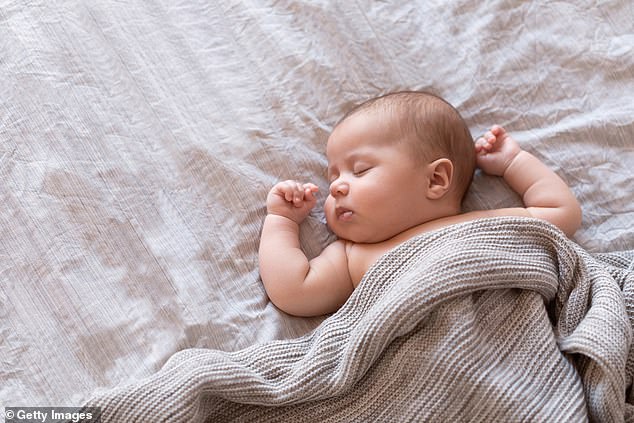 Thousands who saw the photo quickly thanked the paramedic for sharing the photos, saying they were unaware (stock image)

Thousands who saw the photo were quick to thank the paramedic for sharing the photos.

“This was a big red flag when my baby boy had meningitis at 10 months!” a parent wrote.

“Along with high temperatures, vomiting, refusal to eat and extreme lethargy/drowsiness. It was the scariest day of my life.’

Another added: ‘My baby had this at four months, which is how we found out he had a serious urinary tract infection. He underwent lumbar puncture, blood ultrasounds. Everything!

“He also had a severe dairy allergy that was also misdiagnosed until now.”

A third wrote: ‘So scary, both my babies had so much hair, looking back now I wouldn’t have been able to see this if it had happened to them’.