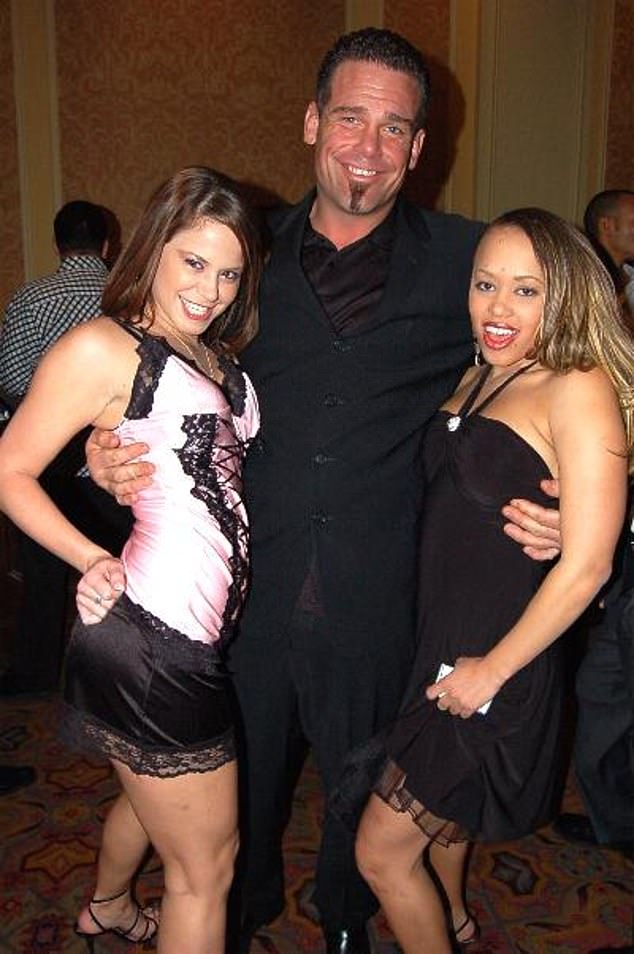 Aldrich, 22, is suspected of murdering five people and injuring others at Club Q on Saturday.

The suspect’s original name, however, is Nicholas Franklin Brink before he changed it to Anderson Lee Aldrich in 2016, a petition signed by his biological grandmother and step-grandfather, as well as his mother.

According to a petition, the name change was meant ‘to protect himself and his future from any connections to birth father,’ Aaron Brink.

He also appeared on camera on the reality shows Divorce Court and Intervention in 2009, when his fiancee tried to get him to stop using crystal meth, according to the New York Post. 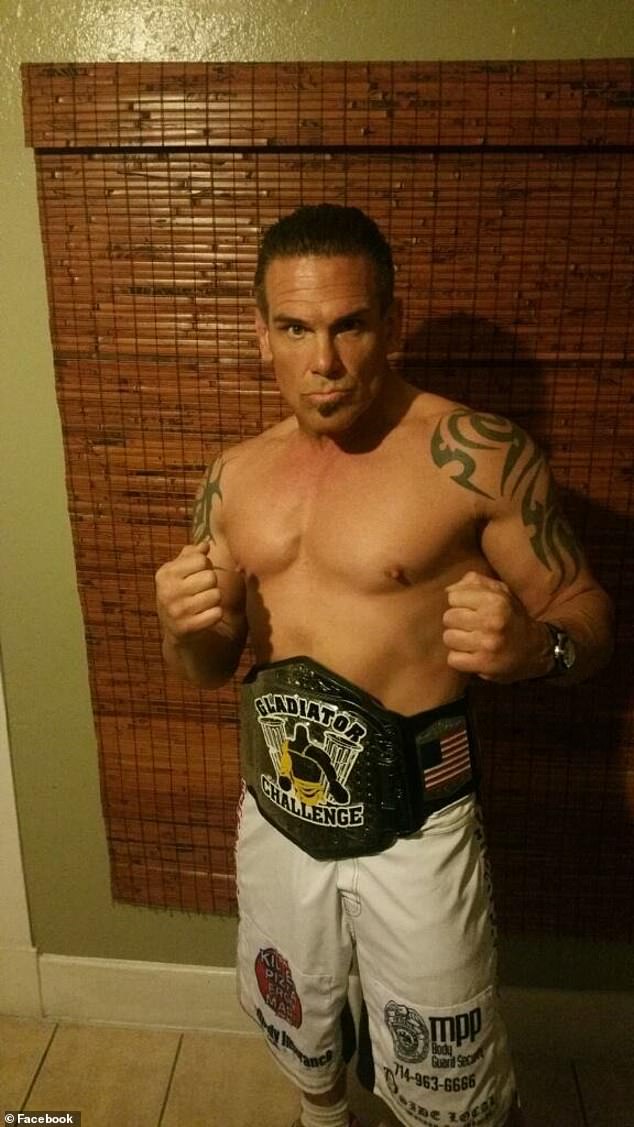 According to a petition, the name change was meant ‘to protect himself and his future from any connections to birth father,’ Aaron Brink 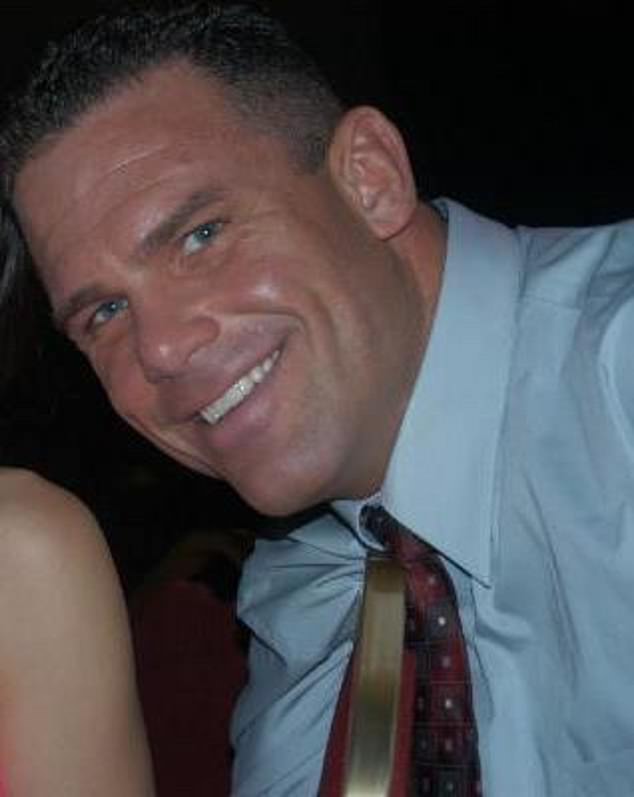 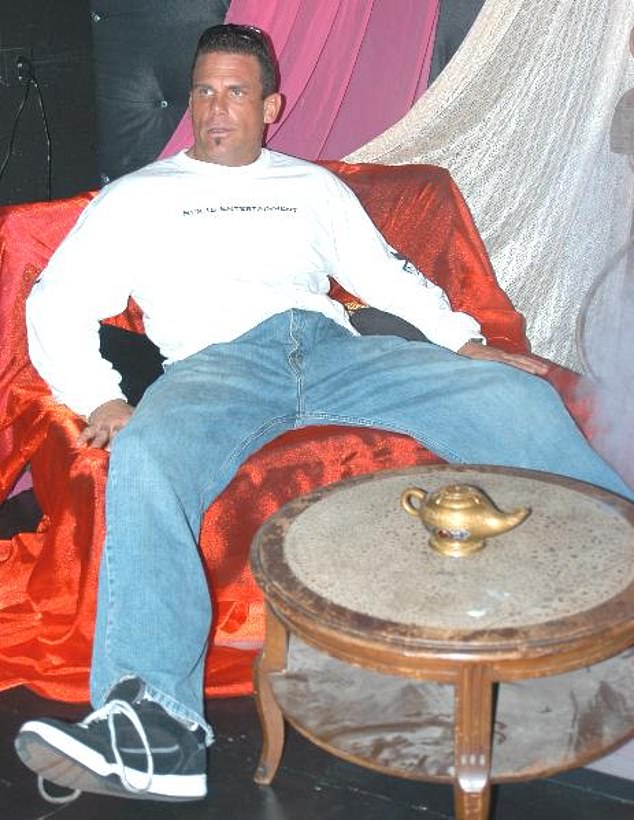 He also appeared on camera on the reality shows Divorce Court and Intervention in 2009, when his fiancee tried to get him to stop using crystal meth 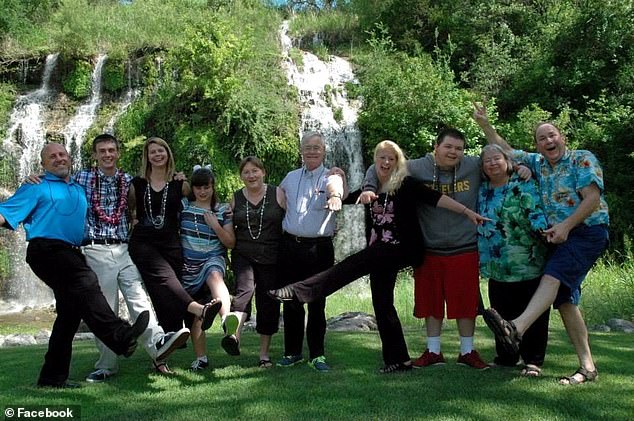 Laura Voepel (4th from right), who is reportedly the mother of suspected Club Q shooter Anderson Lee Aldrich (3rd from right), is seen in a family photo from her Facebook page

Brink has an extensive criminal history, including convictions for battery against the alleged shooter´s mother, Laura Voepel, both before and after the suspect was born, state and federal court records show.

A 2002 misdemeanor battery conviction in California resulted in a protective order that initially barred the father, Aaron F. Brink, from contacting the suspect or his mother except through an attorney, but was later modified to allow monitored visits with the child.

The father also was sentenced to 2 1/2 years in custody for importation of marijuana and while on supervised release violated his conditions by testing positive for illegal steroids, according to public records.

Brink has a career record in MMA, across UFC and other fighting competitions, of 29 wins and 27 losses.

His son’s request for a name change came months after Aldrich was apparently targeted by online bullying.

A website posting from June 2015 that attacked a boy named Nick Brink suggests he may have been bullied in high school.

The post included photos similar to ones of the shooting suspect and ridiculed Brink over his weight, lack of money and what it said was an interest in Chinese cartoons.

Additionally, a YouTube account was opened in Brink’s name that included an animation titled “Asian homosexual gets molested.”

Anderson Lee Aldrich, 22, is suspected of murdering five people and injuring others at Club Q on Saturday.

Just before midnight on November 19, Aldrich is thought to have opened fire in Club Q in Colorado Springs. He was eventually subdued by US Army veteran Richard M. Fierro as well as patron Thomas Jane and a drag performer.

The club’s owners say he arrived with ‘tremendous firepower’ – an AR-15 rifle, six magazines of ammo and a handgun. Patrons used the handgun he was carrying to beat him to the ground until police arrived.

Xavier Kraus, 23, told the Daily Beast that Aldrich would regularly attend a gun range were ‘rapid fire’ was allowed. The suspect when to the shooting range with his mother, Laura Voepel, the neighbor said.

Kraus also said that in times of anger, Aldrich would use gay slurs and regularly used the word ‘f****t’.

In a separate interview with CBS News, Kraus said that Aldrich admitted to using heroin and said that he was addicted to opium.

During that interview, Kraus discussed the suspect’s use of gay slurs saying: ‘It didn’t come across as true hate like, “I’m gonna go kill these people.'”

Anderson Lee Aldrich last year, showing up at the house where his mother was renting a room, after threatening to blow up his grandparents, with whom he’d been living nearby. His mom helped him into the house and had called the landlord to tell her not to tell anyone where he was, she claimed on Monday 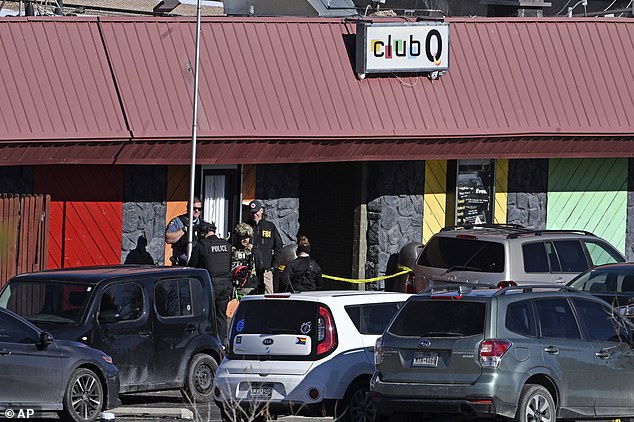 The owners of Club Q say Anderson Aldrich arrived with ‘tremendous firepower’ – an AR-15 rifle, six magazines of ammo and a handgun 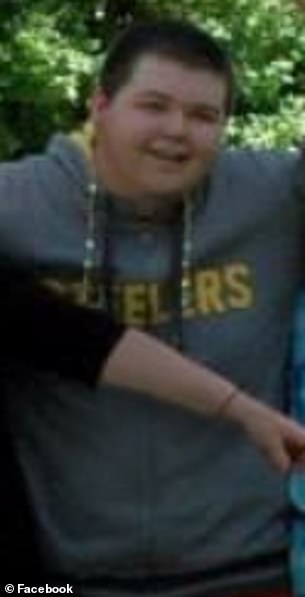 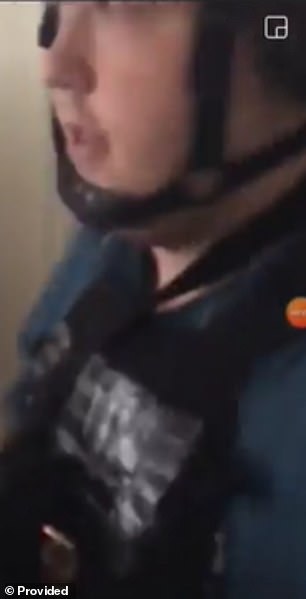 Anderson Lee Aldrich is shown, left, in a family photo and right, in a June 2021 livestream where he threatened to blow up a house where his mother was renting a room. He is now charged with five counts of murder

Xavier Kraus said in his Daily Beast interview that when he had a conversation with the suspect about the possible dangers surround guns, Aldrich said: ‘It’s not the gun you’ve go to be afraid of, it’s the people.’

The neighbor said that Aldrich even invited him to the gun range in order to teach him about gun safety.

Kraus said: ‘We never ended up getting around to do that. But that conversation just kind of sits with me, because I know how I felt when I saw the gun and he showed it to me.’

He continued: ‘He was like, ‘This is all legal. I’m totally allowed to have this.’ It was an assault-rifle type gun.’

A year and a half before the Colorado Springs shooting, Aldrich allegedly threatened his mother with a homemade bomb, forcing neighbors in surrounding homes to evacuate while the bomb squad and crisis negotiators talked him into surrendering.

The incident involved Aldrich fleeing to the home where his mother was renting a room. He had been living nearby with his grandma, Pam Pullen, and her husband Jonathan, but went on the run after threatening to kill them.

His mother Laura is shown on Ring camera footage from that day welcoming her son into the house, helping him with his suitcase. Once inside, he filmed himself in SWAT gear, broadcasting live on his mother’s Facebook account. 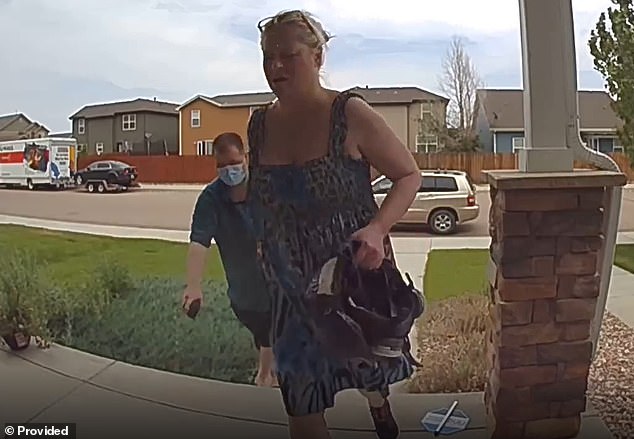 His mom helped him into the house and had called the landlord to ask her not to tell anyone where he was, she claimed on Monday

Weeks after the incident, Aldrich’s mother Laura asked women in her church group if they could recommend a ‘fantastic defense attorney’. It’s unclear if she was referring to her son’s case, but the timing would suggest so

Yet despite that scare, there’s no public record that prosecutors moved forward with felony kidnapping and menacing charges against Aldrich, or that police or relatives tried to trigger Colorado’s ‘red flag’ law that would have allowed authorities to seize the weapons and ammo the man’s mother says he had with him.

While it’s not clear the law could have prevented Saturday night’s attack — such gun seizures can be in effect for as little as 14 days and extended by a judge in six-month increments — they say it could have at least slowed Aldrich and raised his profile with law enforcement.

Kraus, who said that he once considered Aldrich to be a friend, told CBS: ‘Apparently he was charged with kidnapping his mother. [Neither] his mother or his mom’s mom – they didn’t want any charges pressed against Andy.’

Documents associated with the threat are now sealed.

Kraus went on to say that Aldrich also made a reference to ‘shooting his gun’ when talking about a woman who he had issues with.

He said: ‘And this one of the instances where his mom was like, “Andy, oh my God, no, you can’t say that.”‘

Kraus said that around 3 am on Sunday morning, police called to his home to ask about Aldrich.

Two of the victims have been named as Derrick Rump and Daniel Aston, a 28-year-old trans man, who both worked in the club as bartenders.

Aeron Laney, 24, was at the club for the first time, having just moved to Colorado Springs. She described a small club where everyone seemed to know each other, the kind of place she knew she would fit right in.

‘Everyone was just having a good time and smiling and laughing,’ she told AFP, tearfully looking at the bank of flowers growing outside the club.

‘I just can’t wrap my head around somebody just walking in and seeing people that are so happy and so comfortable in their community and just wanting to end that.’

Laney and her friend Justin Godwin left minutes before the gunman stormed in.

‘Maybe the guy was already there. Like was he in the parking lot… just planning it?’ Godwin, 25, said. ‘It’s just terrifying.’ 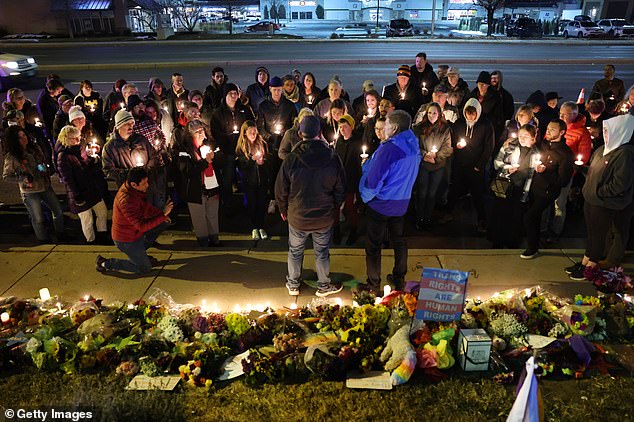 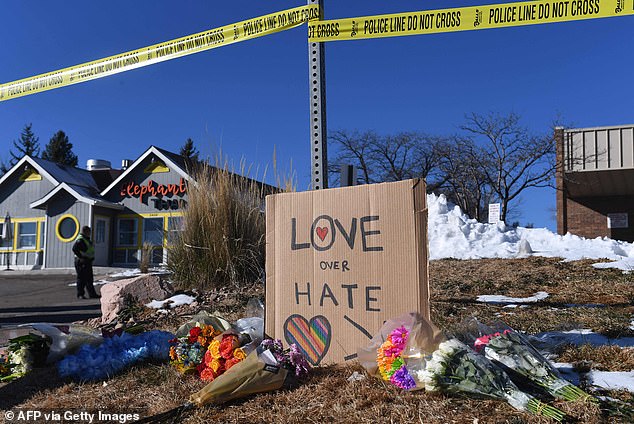 The shooting is now being investigated as a hate crime, leaving members of local LGBTQ community devastated

‘We must drive out the inequities that contribute to violence against LGBTQI+ people. We cannot and must not tolerate hate,’ he said. 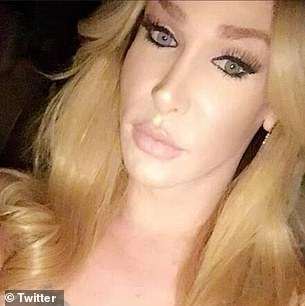 A worker at Club Q, which is billed as a ‘happening gay nightclub’ on its website, paid tribute to his two slain colleagues Sunday, sharing a picture of Rump and Aston to Facebook.

The post featured a photo of the pair behind Club Q’s bar, as well as an accompanying caption mourning the loss.

‘My boys are gone,’ the tribute read. ‘Plz (sic) take care of each other. I love you both so much.’

A friend of Rump also posted a tribute to his late friend, who, like Aston, was a member of the local LGBTQ community.

‘Two beautiful souls were taken from us last night,’ the poster wrote, adding that while he did not know Aston well, ‘both [would] be missed.’

The poster would go on to paint a picture of Rump from accounts of those who knew him, describing him as ‘an amazing person with a big heart.’ 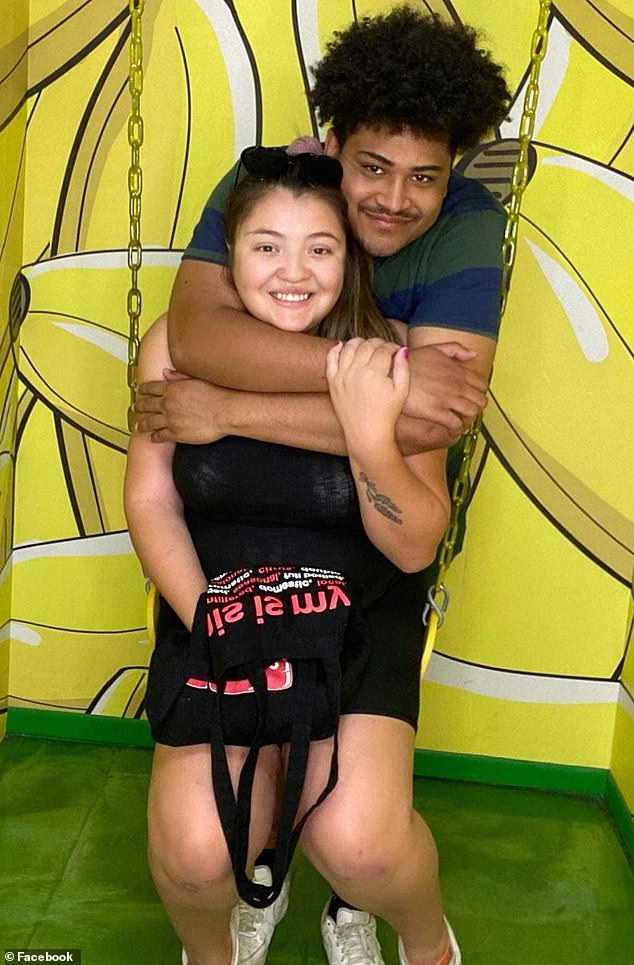 Kassy Fierro is pictured with her boyfriend Raymond Green Vance, 22, who tragically lost his life during the shooting at the Colorado Springs gay bar on Saturday night

Another victim, Raymond Green Vance was the boyfriend of Kassy Fierro. She is the daughter of Rich Fierro, who was one of two men who ultimately managed to subdue gunman Anderson Lee Aldrich.

Kassy broke her knee as she was running for cover during the shooting.

‘I had my whole Colorado Springs family in there. I had to do something. He was not going to kill my family,’ Rich Fierro, 45, said to the Washington Post on Monday.

‘I just want people to take care of people, the people who are hurt and no longer with us. I still got two of my best friends who are in the hospital. They still need prayers; they still need support.’

Fierro, who works for defense contractor Northrop Grumman and co-owns Atrevida Beer, was at the club along with his wife, Jessica.

Among the remaining victims was a transgender woman who just moved to Colorado Springs and a married mother who was visiting the club with a friend when she was killed. 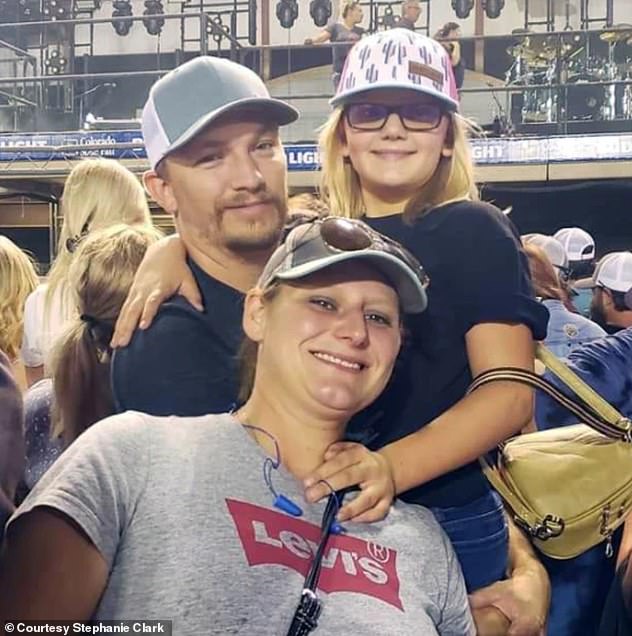 Ashley Paugh, pictured with her husband and 11-year-old daughter, was among those killer on Saturday. She was visiting the club with a friend when the gunman opened fire

All bundled! The cutest pictures of Nick Jonas and Priyanka Chopra’s daughter