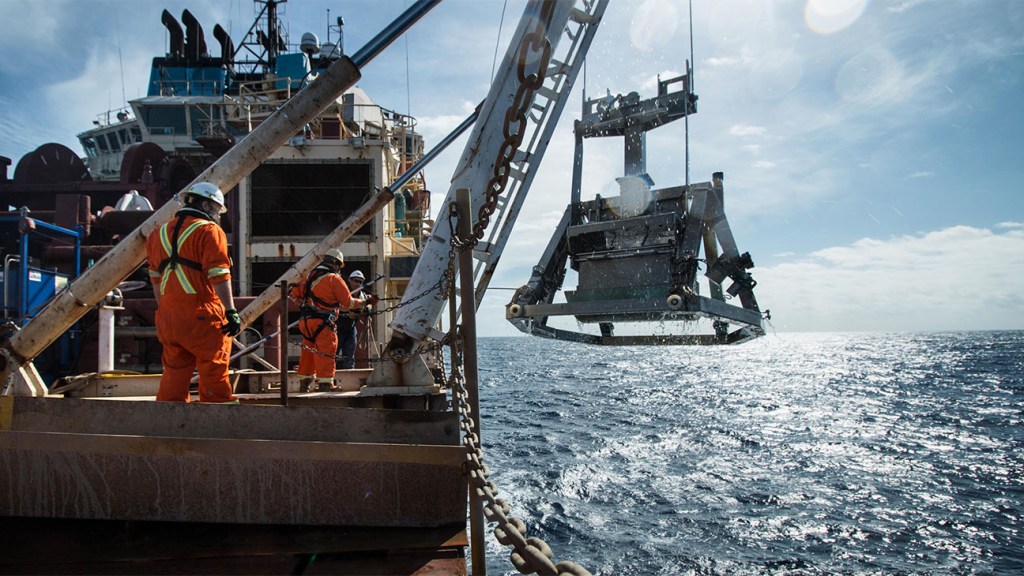 You can get visual whiplash while watching Matthieu Rytz’s documentary on the geopolitical, economic, social and environmental consequences of mining the planet’s ocean floors for metals.

One minute you think you’re watching an IMAX documentary about beautiful creatures of the deep, with enough amazingly translucent jellyfish to satisfy any stoner’s need for optical stimulation. The next moment there are seemingly endless images of corporate boardroom discussions, congressional hearings, investor meetings and cocktail parties, with many participants’ faces blurred as if they were in an episode of Police officers.

Unfortunately, there are more of the latter images than the first, with the result that Soaring deephaving its world premiere at the Sundance Film Festival can be a frustratingly (and ironically, given the subject) dry experience.

Jason Momoa, who also serves as an executive producer, serves as the film’s narrator, an apt choice not only because of his environmentalist work, but also because, if you’re going to make a documentary about the plumbing of the depths of the oceans, who better than Aquaman himself?

There is no doubt that the film deals with important issues as the world continues to develop a predatory need for the minerals needed to produce cell phones and batteries for electric cars, among other things. And the debate over the need to explore the depths of the ocean has been going on for a long time, as evidenced by an opening clip of JFK attempting to give a televised address on the matter, funny twisting his lines and several takes necessary.

The filmmaker – whose previous effort, 2018’s Anote’s Ark, who dealt with the devastating effects of climate change on the Pacific island of Kiribati, is a visual anthropologist with a clear affinity for his subject. The documentary largely focuses on the company DeepGreen Metals, later The Metals Company, whose charismatic CEO Gerard Barron (he looks like a somewhat weathered Patrick Dempsey) is repeatedly shown making impassioned pitches for the economic and environmental importance of mining the mineral-rich tubers located at the bottom of the ocean.

It requires intense concentration to follow the twists and turns of the story, if you can call it that, as the retinue of talking heads delivering jargon-heavy information quickly becomes paralyzing. At one point, we are treated to a PowerPoint-style lecture on the intricacies of oceanic mining by a scientist drawing on paper on the hood of a car in the desert. It’s an interesting low-tech approach to explaining pretty high-tech problems. Another long segment involves many debates in the United Nations about which countries have the right to exploit the world’s oceans. Of course the United States thinks so.

Based in Kingston, Jamaica, the International Seabed Authority was established in 1994 to regulate deep-sea bottom mining, protect the marine environment, and settle conflicts of jurisdiction. Seems like the perfect solution, except that, as the film convincingly argues, the organization has been the subject of numerous controversies over lack of transparency and conflicts of interest, among other things.

None of this deters The Metals Company, whose motto promises us that “The Future is Metallic.” But as Momoa repeatedly informs us in his narration (conducted in an appropriately solemn tone for the subject, but sounding almost numb), there are still many questions about the environmental dangers of such mining activities. As much as you’d like to deal with these serious issues while watching the movie, it’s hard not to wish that the headlines would stop talking and the pretty fish would come back.