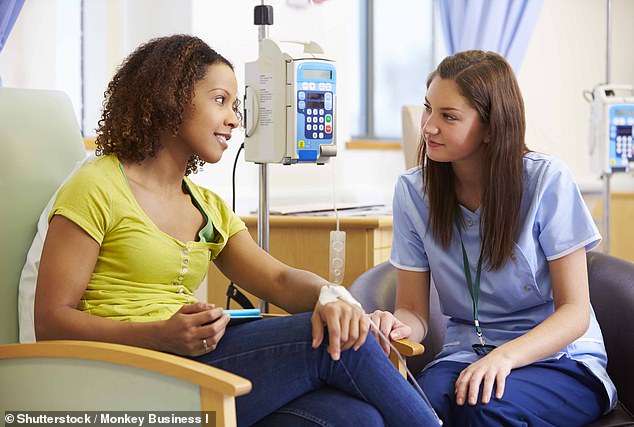 DMT — the most powerful psychedelic known to man — treats people with major depression after a single dose, a landmark clinical trial suggests.

Up to six in ten who received a single dose of DMT intravenously before therapy were declared depression-free three months later.

And three in 10 participants were declared depression-free two weeks after one session, compared with one in 10 in the placebo group who had therapy alone.

N,N-Dymethyltriptamine (DMT) has gained the support of celebrities such as Joe Rogan and is becoming increasingly popular as an alternative to harsh antidepressants. Prince Harry recently admitted that he used ayahuasca to help him heal the trauma he felt after his mother’s death.

DMT is the natural psychedelic in ayahuasca, a powerful brew widely used by tribal societies in the Amazon Basin, where it is considered a “wisdom plant” that provides access to the spiritual world.

Ayahuasca is usually drunk as a concoction at religious ceremonies, but in this study participants were given DMT via an IV for 10 minutes, which induced a 20-30 minute psychedelic experience. 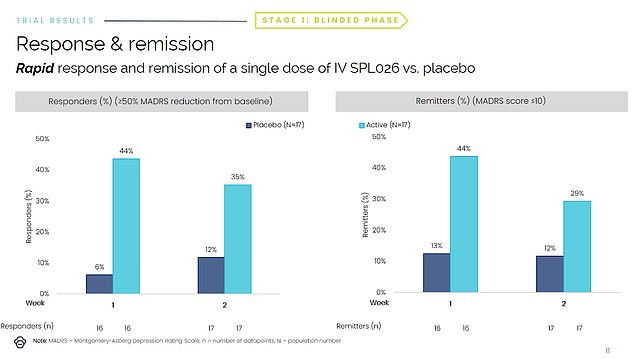 DMT and ayahuasca are part of a wave of psychedelics, along with psilocybin mushrooms and ketamine, which were dismissed as hippie drugs but are now being explored by scientists as powerful therapies.

The latest study was conducted in 2021 by Small Pharma, a biotech company based in Canada.

It looked at 34 male and female participants with moderate or severe depression.

In the first part of the trial, 17 participants were given 21.5 mg of DMT, about half of a typical smoked dose.

They were infused the drug over 10 minutes, providing a 20-30 minute psychedelic experience, followed by a therapy session immediately afterwards to help them understand.

Independent reviewers, who did not know what treatment participants received, rated people’s depression using the Montgomery-Asberg Depression Rating scale (MADRS) at the start of the study and then one, two and 12 weeks later. 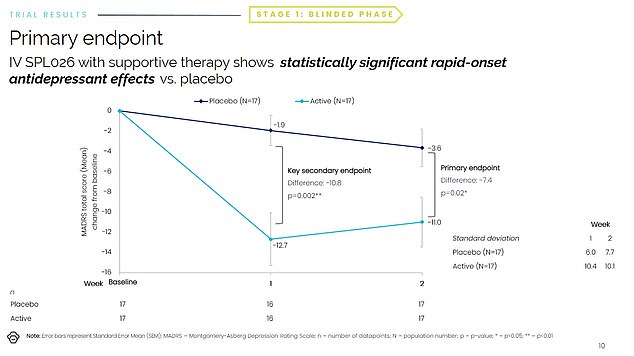 Two weeks after treatment, the depression scores of the DMT group were 7.4 points lower than those of the placebo group, indicating a statistically significant reduction in depressive symptoms compared to the placebo group.

And three months after treatment, symptoms had decreased even further – the overall mean reduction in MADRS scores after one dose of DMT was 15.4 points.

Six in ten of those who received a single dose of DMT were also declared depression-free three months later.

This was defined as a MADRS score of ten or less.

Dr. David Erritzoe, clinical psychiatrist at Imperial College London and principal investigator of the study said: ‘The results are exciting for psychiatry. We now have the first evidence that DMT, in combination with supportive therapy, can be effective for people with MDD.

“For patients unfortunate enough to receive little benefit from existing antidepressants, the potential for rapid and lasting relief from a single treatment, as shown in this study, is promising.”

Until now, the therapeutic benefits of DMT have been mostly anecdotal, alongside evidence showing that the drug also carries the risk of long-term negative effects on mental health.

Scientific details on exactly what DMT does to the brain are scarce, but research suggests there is an increased ‘utilization rate’ of monoamines in the amygdala, which increases the intensity of memories.

There is also increased blood flow to the insula, which could be responsible for users’ increased self-awareness.

This is believed to make therapy more effective, as people can confront their trauma with less fear.