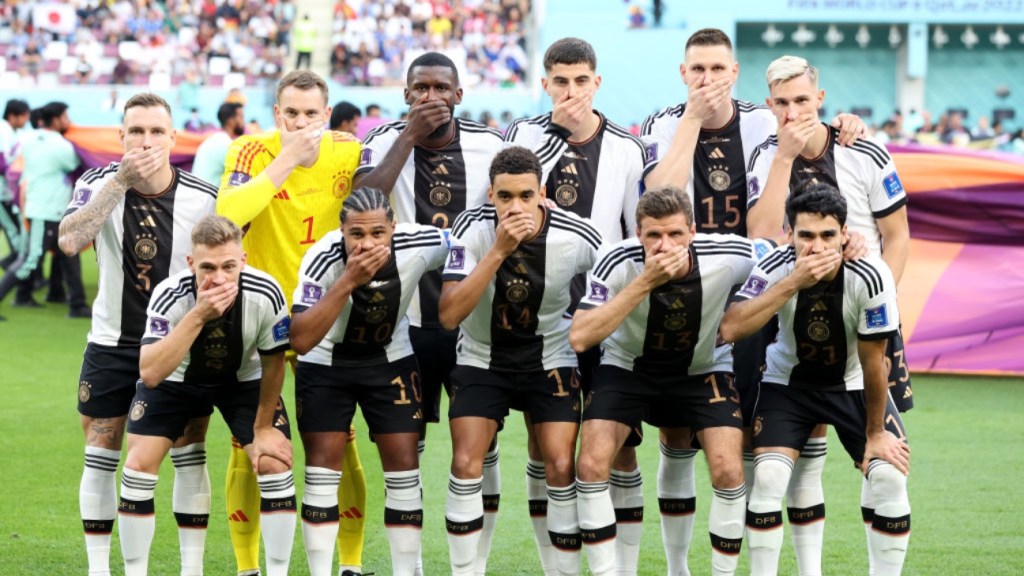 There is a lot of controversy surrounding this year’s FIFA World Cup in Qatar. From allegations of bribery and fraud in awarding the tournament to the small, wealthy Middle Eastern country, to criticism of Qatar’s persecution of the LGBTQ+ community and its treatment of migrant workers

But judging by the ratings after the first week of competition, the critical coverage hasn’t hurt ratings much.

In the US, broadcasters Fox Sports and Telemundo, which broadcast the tournament in English and Spanish respectively, have got off to a strong start. Sunday’s opening game between hosts Qatar and Ecuador was watched live by an average of around 7 million people on both networks. An average of 4 million people tuned into Spanish-language broadcasts on the digital platforms of Telemundo, Peacock and Telemundo Deportes, a 164 percent increase from the 2018 World Cup opener between Russia and Saudi Arabia. English-language viewership on Fox was 78 percent higher than in 2018, peaking at 3.5 million viewers, compared to 1.7 million viewers to the opening game in 2018.

Tuesday’s match between Mexico and Poland averaged 4.6 million viewers for Telemundo and Peacock across all platforms.

Bell Media, TSN’s parent company, says audiences have made the match the most-watched World Cup group match ever, citing nightly data from Numeris (Canada’s Nielsen). The last time Canada appeared at the World Cup was in 1988. The opener was Canada’s second most watched sports broadcast of the year behind only Super Bowl LVI.

In total, the game reached 8.9 million viewers, or about one in four Canadians who watched part or all of the live broadcast, ending with Belgium winning 1–0.

In Britain, the BBC has taken a stronger stance on issues in Qatar, moving coverage of Sunday’s opening ceremony from its main channel in favor of a human rights message presented by presenter Gary Lineker.

But that position didn’t seem to dampen Britain’s appetite for World Cup football. A peak of 8 million tuned in to the BBC to watch England beat Iran 6-2 in its first game of the competition on Monday. While the viewing figures for the team’s opening match against Tunisia at the 2018 World Cup in Russia were significantly lower – peaking at 18.6 million – it should be noted that that match was played in the evening, while the match against Iran was well outside primetime was broadcast. at 1 p.m. in the UK. The BBC said another 8 million people streamed Monday’s match on iPlayer.

With a primetime slot of 7pm on Friday and against their age-old foe, England’s match against the US should prove to be a much bigger draw, although the total figure may be unknown due to the sheer numbers expected to be in pubs to look.

Meanwhile, playing in a World Cup for the first time since 1958, Wales beat their local rivals in terms of audience, with a peak of around 13 million watching their stubborn 1-1 clash with the USA on ITV (some no doubt helping to 7:00 p.m. start time).

When England and Wales finally meet at 7pm on Tuesday 29 November, the evening slot and the fact that the two neighbors have never played against each other in a World Cup should see the BBC’s ratings go up.

In Germany, however, where official World Cup broadcasters ARD and ZDF reported extensively on human rights violations in Qatar and calls to boycott the tournament, viewership has so far fallen sharply compared to previous World Cups.

The German team’s surprise 1-2 defeat to Japan on Wednesday attracted just 9.2 million viewers on ARD, although the early start time – 2pm in Germany – may also have played a role. The audience was a fraction of the nearly 26 million who watched Germany’s opening game of the 2018 World Cup in Russia (where the Mannschaft also lost 0-1 to Mexico).

Sunday’s opening game, in which hosts Qatar lost 0-2 to Ecuador, only attracted 6.2 million German viewers on ZDF. In comparison, more than 10 million Germans watched the opening game between Russia and Saudi Arabia in the 2018 World Cup.

In the pre-match team photo, the German players covered their mouths in a silent protest against FIFA, which had threatened to penalize players if they wore a rainbow-colored ‘OneLove’ bracelet as part of a campaign to raise awareness about LGBTQ+. rights. Consensual relationships between members of the same sex are illegal in Qatar. FIFA claims the bracelet violates the ban on “political symbols”.

“Even without the armband, our position remains,” the official tweet from the German Football Association (DFB) reads, with a photo of the players covering their mouths. “We wanted to set an example for values ​​we live in the national team: diversity and mutual respect. To make our voice heard together with other nations. This is not about a political message: human rights are non-negotiable.”

Recruiting with our kapitänsbinde and Zeichen setzen für Werte, who live in der Nationalmannschaft: Vielfalt en gegenseitiger Respekt. Gemeinsam with others Nationen laut sein. There is not a single political botschaft: Menschenrechte sind nicht tradable. 1/2 pic.twitter.com/v9ngfv0ShW

While German players did not wear the OneLove armband, German Interior Minister Nancy Faeser proudly wore hers as she watched the game, sitting next to FIFA President Gianni Infantino.

The OneLove controversy has already cost Germany: one of the national team’s sponsors, supermarket chain Rewe, canceled their deal with the German Football Association after the team gave in to FIFA’s demands to drop the armband.

“We stand for diversity and football is also diverse,” Rewe boss Lionel Souque said in a statement. “The scandalous behavior of FIFA is completely unacceptable to me, as the CEO of a diverse company and also as a football fan.”

After Germany’s loss to Japan, some in the local media blamed the debate surrounding the OneLove bracelet and the team’s pre-match protest.

“There was too much drama in the build-up, too many things that were more important than football, just like four years ago [when Germany went out in the first round], said former Germany captain and 1990 World Cup champion Lothar Matthäus in the tabloid Bild. “Those kinds of things disrupt your concentration, it’s distracting — and so means you’re missing the crucial five or 10 percent.”

There was little protest or controversy on Japan’s public broadcaster NHK, which achieved an impressive 40.6 percent share of the Tokyo market for its coverage of the game between Germany and Japan, despite Japan’s late 10 p.m. kickoff . Millions more caught the game on streaming platform Abema, peaking at more than 10 million viewers on Wednesday, according to parent company CyberAgent Inc.

There were also no signs of protest as reining World Cup champions France took to the field for their opening game against Australia on Tuesday. Les Blues also had no problem attracting a home crowd. According to figures from viewing group Médiamétrie, 12.53 million residents tuned into national network TF1 to watch the French team beat Australia 4-1, an audience comparable to the 12.59 million who watched France’s opening game, also against Australia, in Russia 2018 watched.

Review | ‘Butts’ is a sassy look at the backside of women