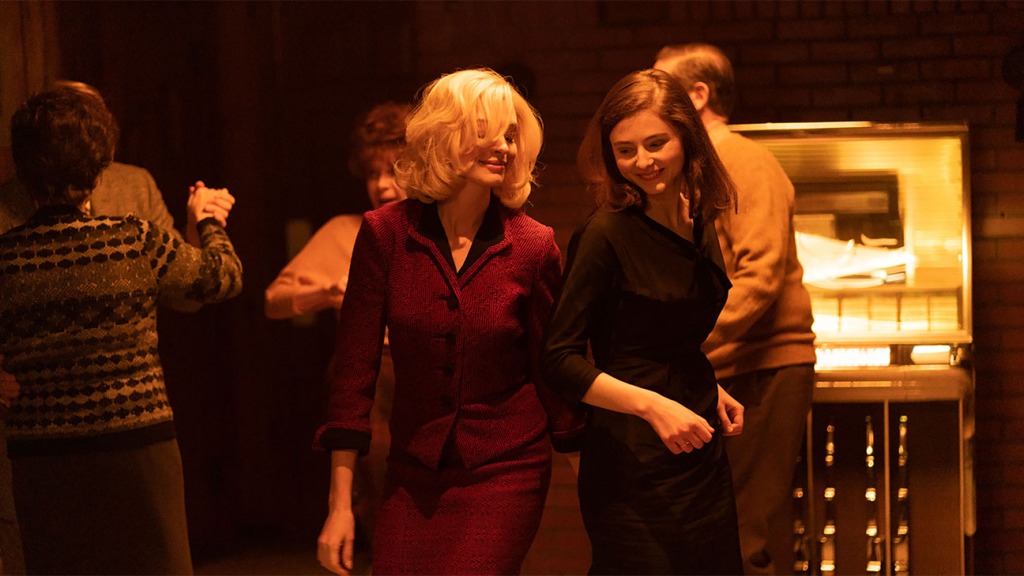 Anyone who’s seen William Oldroyd’s 2016 first feature film, the blisteringly indecent Victorian tragedy Lady Macbeth, will know not to expect anything ordinary from its long-awaited successor. But even with those expectations in mind, what a strange and enchanting psychological thriller he has weaved from Ottessa Moshfegh’s novel, Eileen, who shares with the British directorial debut an infectious fascination for complicated women subject to dark impulses. Rippled with sly wit and a daring mastery of the tropes of classic Hitchcockian suspense, this is a twisty and seductive original, led by contrasting yet expertly synchronized performances from Thomasin McKenzie and Anne Hathaway.

While the new film, set in 1964 in the snowbound working-class neighborhoods of Boston, is a very different animal from Lady Macbeth, it shares some thematic elements, most notably the unblinking study of a title character who transforms once taken out of the cage, her desires that release an unexpected ruthlessness. And just like Oldroyd’s previous film, which put the spotlight on Florence Pugh, this one will boost McKenzie’s career. Her work here builds on the promise she showed in movies like Leave no trace and Last night in Soho and runs along in strengthening new directions.

“Everyone is pretty angry here. It’s Massachusetts,” Eileen Dunlop tells her glamorous new colleague in the boys’ prison where she works in the office, Rebecca St. John of Hathaway. But Eileen seems to be the only person out of touch with her anger, as she stares longingly at couples making out in cars parked on the wintry coast or has sex fantasies about a lanky prison guard (Owen Teague) before going home each night to the verbal abuse of her father, a widowed ex-cop (Shea Whigham). He’s a mean drunk and tells her there are two kinds of people in the world: the dynamic characters you can’t take your eyes off of in movies and the other nobody who just fills the spaces around them, with Eileen lumped together is thrown.

While Eileen’s mind flashes with thoughts of blowing her brains out or her father’s, at first glance she is a mousy figure in shapeless vests and sloppy skirts, numb to the blunt treatment of her older colleagues in prison, particularly a chief secretary. played with hilarious sourness by Siobhan Fallon Hogan. But when Rebecca is let in as the new prison psychologist, a blonde vision cast in cozy dress suits, carrying herself with imperturbable poise on her powerful heels, something sparks in Eileen. And maybe Rebecca, a dangerous character inspired by the Hitchcock movie, in turn sees something malleable and alluring in Eileen.

Rebecca immediately slips into easy, light-hearted girlfriend mode with the younger woman, perhaps making her feel seen and special for the first time, and Eileen reacts like a sponge soaking up water. Soon she mimics Rebecca, dragging wisps of cigarette smoke behind her and ransacking her mother’s closet. It helps that the late Mrs. Dunlop was a stylish drying rack, an unlikely plot convenience that is one of the many ways in which Eileen lush in its filmy artificiality. “You’re different these days,” her father tells her. “You’re almost interesting.”

Eileen and Rebecca share a fascination with the case of one of the juvenile offenders serving his sentence, Leo Polk (Sam Nivola), who murdered his police officer father by stabbing him multiple times in his bed. Rebecca asks the young man’s mother (Marin Ireland) to come in during visiting hours, but Mrs Polk’s encounter with her son ends with her storming out in a distraught rage and calling him “a filthy ‘bad boy’.
Perhaps to blow off steam after that incident, Rebecca invites Eileen for after-work cocktails at the only bar in town, a dingy hangout in which the psychologist acts like a regular in Manhattan’s poshest watering hole.

Hathaway exudes worldly confidence from every perfect pore and is at her best in this role. It’s impossible not to share Eileen’s intoxication with Rebecca, who is as quick with her wits as she is with her fists when a man comes across as too strong. As she dances with Eileen by the jukebox to The Exciters’ “Tell Him,” then transitions into a sensual slow dance to Art Neville’s “All These Things,” the film makes us believe that we are in Carol area.

Oldroyd and his screenwriters, Luke Goebel and writer Moshfegh (fresh from her fine work on Elevated road), knowingly feed that vein of heady romance. DP Ari Wegner’s camera remains fixed on Eileen’s nervously ecstatic face in a bathroom mirror as she mentally prepares for what she expects to be a Christmas Eve temptation at Rebecca’s house. “People are so ashamed of their desires,” Rebecca tells Eileen, with a conspiratorial intimacy that seems like a foretaste of things to come.

But the film delivers a big surprise halfway through, when the psychologist confesses to a hasty move and reveals the rattling woman beneath the smooth veneer. She pulls her young friend into a shockingly compromising situation that goes further awry once the initially reluctant Eileen comes on board and agrees to help. The slumbering noir tones – slyly suggested since the opening shot of a car shrouded in fog and fueled by the agitated crescendos of Richard Reed Parry’s prodigious arc score – come to full bloom.

In the intense final act, both main characters behave in a way that seems to be curled up inside them all along, giving the actors wonderfully juicy stuff to work with. Hathaway shows Rebecca’s temporary loss of control before returning to cold-blooded pragmatism, while McKenzie pushes Eileen to become almost unhinged in her amoral determination, willing to do anything to get what she wants. Equally astonishing in this climax is the priceless Ireland, playing a coarse, bitter woman who confesses the depths of caustic self-deception that trauma can unleash in a compelling monologue.

Wegner shoots in the tight 4:3 aspect ratio with an atmospheric sense of the Massachusetts winter as a grim stranglehold, which Eileen discovers through Rebecca she longs to escape. Craig Lathrop’s period production design similarly nails the bleak setting, while Olga Mill’s costumes for Rebecca, and later Eileen, seem to suggest the beckoning world beyond. This is a film that is both evil and playful, morbidly funny and disturbing. It confirms more than the radical talent that Oldroyd showed Lady Macbeth and whets the appetite for more film adaptations of work by acclaimed fiction writer Moshfegh.