Eurostar vs Megabus: Paris to Newcastle by rail then road, from a £276 berth to a £17 coach seat 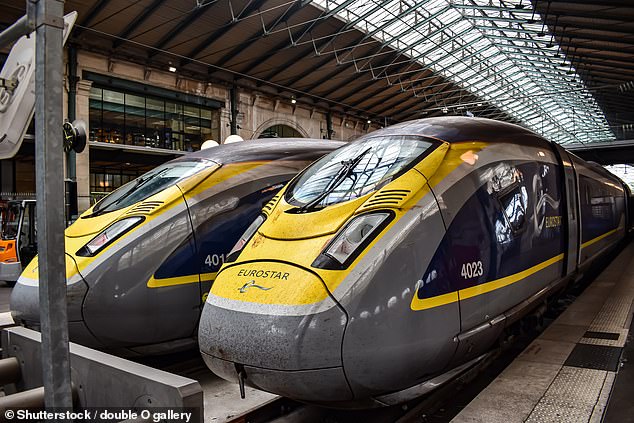 I travelled first class from Paris to London on Eurostar but then switched to no-frills Megabus for the final leg of a return journey to Newcastle on Tyne. What is it like going from unadulterated luxury to cheap-as-chips?

Actually, not that bad. If I could afford it, naturally, I’d plump for the luxury option each time, but it’s not every day that I get invited on an all-expenses-paid VIP trip from London to Paris. (I was gifted money-can’t-buy side-of-the-stage access to the Rock en Seine music festival courtesy of the Marriott Bonvoy loyalty programme – see fact box below.)

As it was my paltry bank balance taking the hit for the hop home, it was a no-brainer to book Megabus. 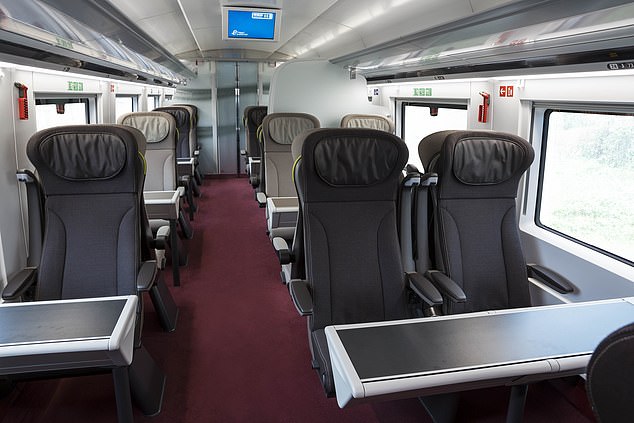 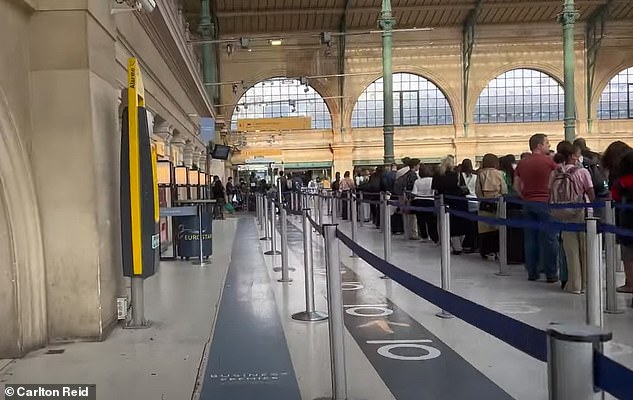 Fast-track: Carlton was able to whizz past the queue at Gare du Nord 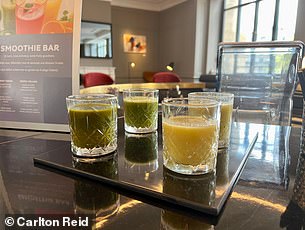 The 212-mile train journey from Paris to London in a Eurostar Business Premier seat with fast access past the station ticket queue cost my benefactor a whopping £276, while the 286-mile coach journey to Newcastle was a comparative snip at just £17.

While Eurostar deposited me in London more than an hour and a half late, the Megabus into Newcastle was just five minutes behind schedule. Given the vagaries of road travel, that was a minor miracle.

However, compared to the London-Newcastle LNER journey on the East Coast mainline, which can take as little as 2 hours 36 minutes, the Megabus journey dragged on and on. 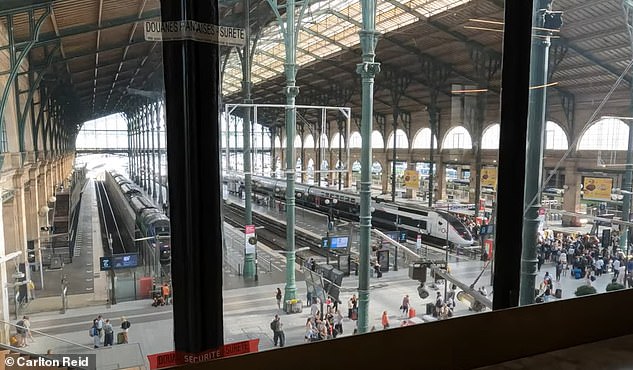 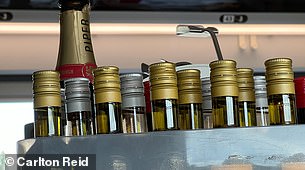 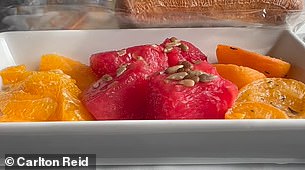 Booze for breakfast? There for the asking from a Eurostar Business Premier seat (left). The food in the top Eurostar carriages is overseen by superchef Raymond Blanc

I slept for as much of the trip as possible, but even for somebody with diddy legs, the seats were cramped and only really comfy for the first ten minutes. Snoozing, I squirmed periodically, trying and failing over the seven hours of the journey to find a remotely comfortable position. Numb bum syndrome is par for the course, I guess.

Most people got off the coach in Leeds, including the wide person sitting next to me, and that gave me an extra wedge of wriggle room, but you don’t travel on Megabus for the comfort.

The Megabus journey to Newcastle cost just 16 pence per mile, while the lavishly catered and bottom-friendly journey from Paris to London was five times more expensive at 79 pence per mile. 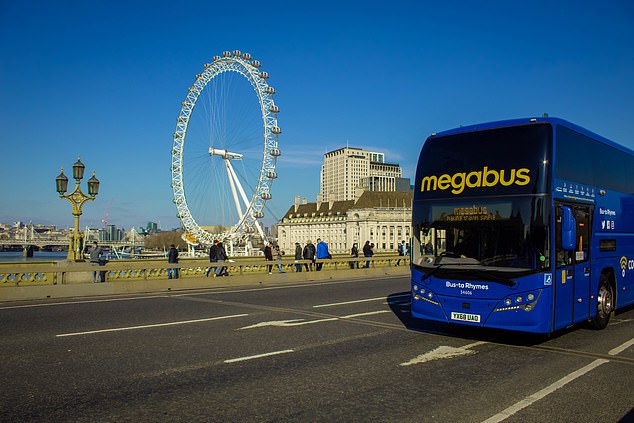 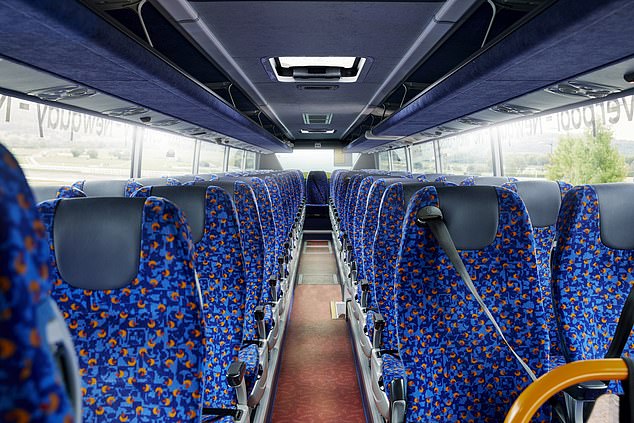 ‘The Megabus journey to Newcastle cost just 16 pence per mile, while the lavishly catered and bottom-friendly journey from Paris to London was five times more expensive at 79 pence per mile,’ reveals Carlton (stock image)

The Megabus nudged 70mph on the motorway; the Eurostar cruised at more than double that and travelled at 186mph for long stretches. Throughout most of the journey the Megabus bucked like a jet hitting turbulence, while there was no spilling of the free drinks on the more than twice-as-fast Eurostar.

Needing a pee, I could only marvel at the teeny-tininess of the half-a-cupboard that housed the on-board lavatory on the Megabus. I’m compact and bijou and even I only just managed to squeeze through the gap. How I was able to close the door behind me is still a wonder.

On the other hand, you could throw a socially distanced party in the huge loo on the Eurostar – a commodious party that wouldn’t feel like a dice with death. The Megabus micro-space loo proved to be terrifying to use at motorway speeds so once out, I was thankful to be back in my seat and in the seatbelt’s tight embrace.

On the Eurostar earlier that day, I had dined on Raymond Blanc’s idea of a 140mph breakfast. In some remote branding exercise, the Michelin-starred chef decided that I should be served with pistachio granola and a yogurt atop a sweet plum compote. Plus, an obligatory croissant. Roast apricots, orange segments and watermelon chunks followed. (The hot breakfast choice was an Emmental and Comté flan, accompanied by rosemary-infused bacon, spinach, and mushrooms. Should you want it, all meals come with wine, even at breakfast.) 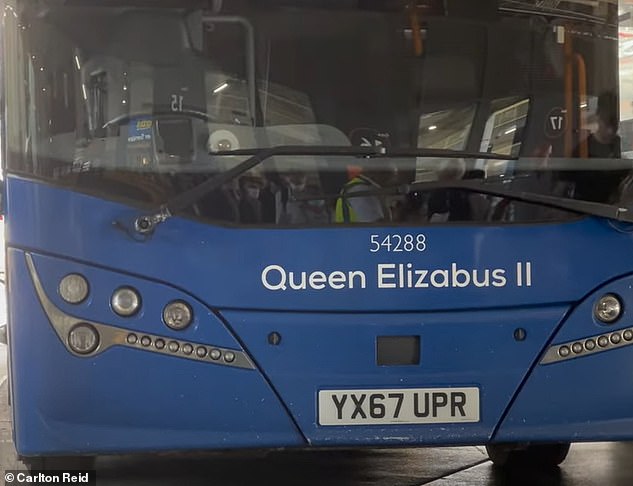 On the Megabus, I self-catered, splashing out on a £1 flapjack. The apple I also ate had been stashed from that morning’s visit to the Eurostar lounge, open only to passengers holding Business Premier tickets.

The second-floor lounge, converted from grandiose railway offices in 2017, is zoned into classy compartments, some overlooking the waiting trains. I grabbed a selection of free newspapers and upscale magazines at the entrance and checked in with the lounge gatekeeper. She told me my train had been delayed but, should I so desire, she would switch me to the earlier service. I did so desire, I answered.

It was only later that I learned that standard-class passengers had to queue and grizzle to be in with the chance of a similar switch while my ticket was successfully amended quietly and efficiently. I assume that this personal service — super-useful when travel glitches arise — is the kind of cosseted benefit that first-class passengers take for granted.

Another key benefit is space, not just for your legs and hips but for your bags.

On the Eurostar, there was ample room to keep my large bag with me so I could access its contents throughout the journey, which is essential for a digital nomad requiring a laptop, charging cables, and the like. 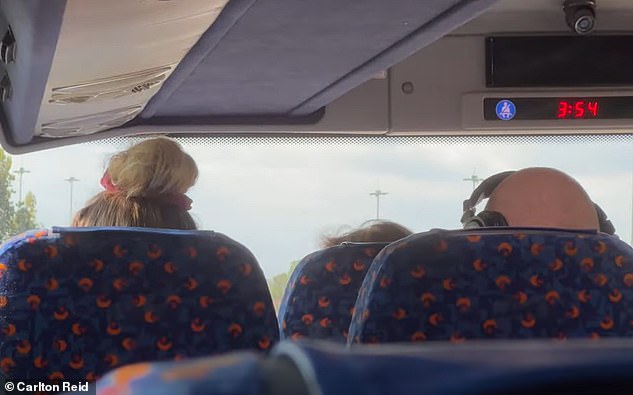 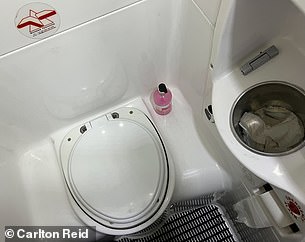 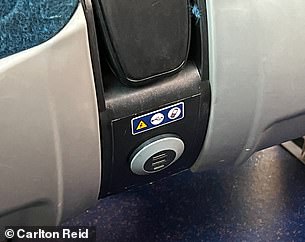 Carlton ‘could only marvel at the teeny-tininess of the half-a-cupboard that housed the on-board lavatory on the Megabus’ (left).  Pictured right are the charging points on the Megabus

On the Megabus, I had to store my bag in the locked-away luggage compartment beneath the bus. I had forgotten to unpack a couple of cables, so I couldn’t plug into the on-board USB sockets to charge my iPhone. Yes, I could have stretched my legs and asked to access the luggage bay at one of the several stops en route, but I didn’t because the drivers (there were two changes along the way) were clearly on a tight schedule.

One of the highlights of the Megabus journey were the tongue-in-cheek names given to the wheelchair-accessible coaches: My bus was called Queen Elizabus II. I spotted a Jenson Busson. Other names for these Volvo workhorses, suggested in a social media competition, include Basil Bus, Bus Lightyear, and but-where’s-the-joke Mega-tron.

Another highlight was the height. Seating is at the top of the coach, giving a grandstand view over London’s traffic jams. I had my beady eye on one sports car driver who was blithely texting as he drove beside us. (He had German numberplates, so I guess reporting his illegality would be pointless.) But, oh, those traffic jams. It was painfully slow at the start of the journey, taking more than an hour to reach the outskirts of London. Great for sightseeing, but not so great if you’re used to already being a third of the way to Newcastle when travelling on LNER. 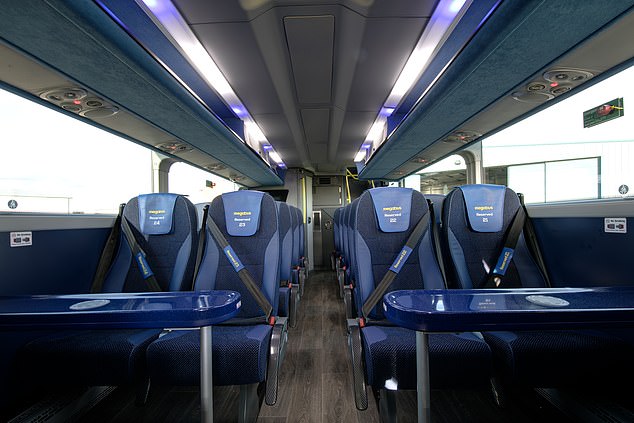 The Megabus (stock image) nudged 70mph on the motorway; the Eurostar cruised at more than double that and travelled at 186mph for long stretches 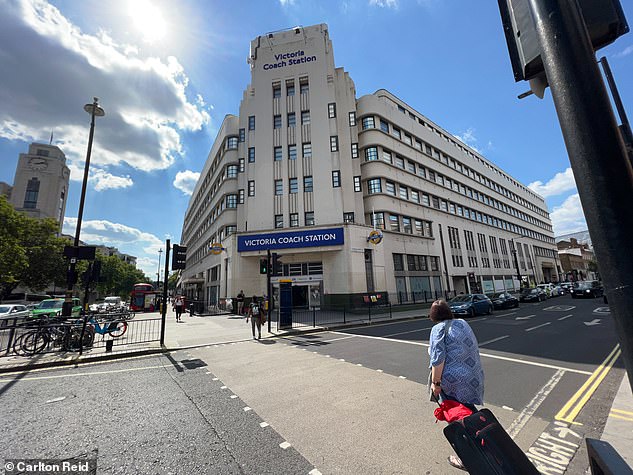 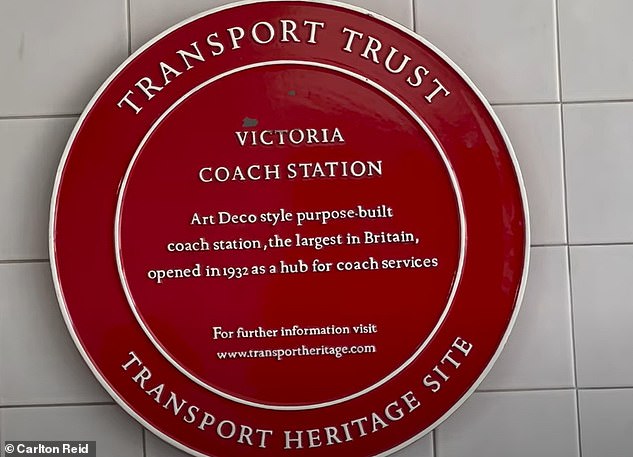 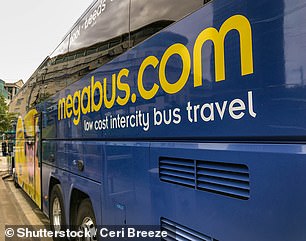 I was impressed by Victoria Station. It was cleaner than I remembered it (I’ve done my fair share of red-eye National Express journeys down the years), and while the toilets were whiffy, at least there was a red Transport Trust plaque explaining that the Art Deco building dated from 1932 and was the ‘largest in Britain’. Then and also now? The plaque didn’t explain, although it stated that the station was ‘purpose-built’. Maybe that explains the station’s excellent ventilation because, despite being full of idling coaches, there was no feeling that standing before them meant breathing in a cocktail of chemicals.

Cocktails of an altogether different kind were available in the Business Premier lounge at the Gare du Nord in Paris. A round bar serves signature concoctions created for the lounge. One of the boozy offerings is based on Toujours 21, a gin developed by the ubiquitous French chef for Eurostar. Of course, Raymond Blanc, who owns Le Manoir aux Quat’Saisons, a restaurant in Oxfordshire with two Michelin stars, isn’t on hand to cook the finger food in the lounge, but there is a ‘mixologist’ to fix the cocktails. 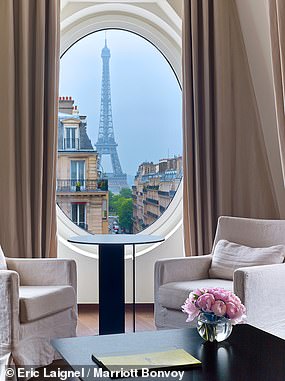 Thanks to those friendly folks at the Marriott Bonvoy loyalty programme, I gained a close-up view of Doncaster’s pop punk star Yungblud as he wowed the Rock en Seine annual music festival in Paris. You couldn’t pay for this side-of-the-stage access. VIP tickets got you close to the mosh pit, but only invited Marriott Bonvoy guests were guided to the back of the stage by one of the festival organisers. What a thrill! We were also led through the band-only chill-out zone, picking out the hammocks for each band, including that night’s headliners, the Arctic Monkeys.

Marriott Bonvoy sponsors many other music festivals worldwide as well as major sporting events and also organises special one-off events allowing members to use their points to buy tickets or, for the more select offers, bid on money-can’t-buy experiences called ‘Moments’.

For instance, a recent Moment – only available otherwise if you were a profligate billionaire – involved staying in a Marriott Hotels guest room created for one night only inside Manchester United’s Old Trafford ground – the pop-up suite overlooked the pitch on a match day. There’s also a semi-permanent Marriott Bonvoy couch sited above the dugouts and available only to Moments guests.

Other experiences have included rides in Steve McQueen’s 1956 Jaguar XKSS from the Petersen Automotive Museum’s private collection in Los Angeles.

Many of the experiences ship with a hotel stay. Successful bidders for an F1 Moment in Kyoto, Japan, on Friday will stay at the luxurious Ritz-Carlton before gaining practice day access to the VIP lounge used by the Marriotts-sponsored Mercedes-AMG Petronas F1 team.

Marriott’s loyalty scheme is the world’s most extensive hotel programme, with 6,700 participating properties in more than 100 countries worldwide.

As part of the Rock en Seine Moments package, I stayed at Le Metropolitan, a Tribute Portfolio hotel with an uninterrupted view of the Eiffel Tower.