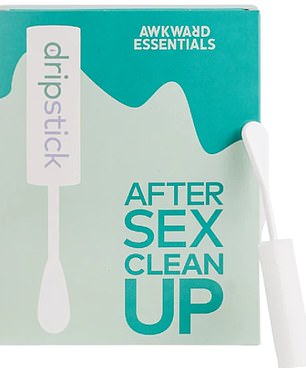 It is marketed as a “sperm sponge,” designed to cleanse the vagina after sex.

But doctors beg women not to use the gadget, a so-called ‘Dripstick’.

Experts say the product is harmful and can cause thrush, bacterial vaginosis and irritation.

Using the device may actually make women more susceptible to getting an STI, one doctor claimed. 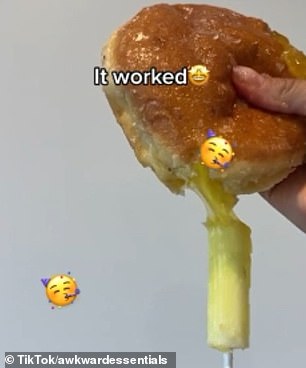 The Awkward Essentials “dripstick” (left) is marketed as a semen sponge, used to clean up drips after sex to avoid wet sheets and pants. The sponge was advertised in a TikTok video (right) showing off its absorbency with a custard donut

It has gone viral again due to doctors trying to encourage women not to use it.

A TikTok ad posted by Awkward Essentials – the company that sells it – shows it being placed in a custard-filled doughnut.

The clip bragged about being able to suck up semen ‘quickly’, using the example of absorbing yellow custard.

The viral product has the same shape as a tampon and is made of polyurethane – a plastic material that has been molded into a sponge.

Essentially, it’s a sponge on a stick used to clean up “drip discomfort” after sex.

It will be shipped with a return address to ‘Richard Cummings’.

Dr. Hannah Crowther, a Berkshire GP with a special interest in women’s health, said it was a ‘bad idea’.

Dr. Crowther told MailOnline: ‘In general, the vaginal flora should be left alone.

“We always say don’t shower and the more you wash inside, the more likely your healthy bacteria will become unbalanced and cause problems.”

She added: “It’s definitely concerning if people are using it for birth control.”

The Awkward Essentials website emphasizes that the ‘dripstick’ is not a menstrual product, contraceptive or STD protection.

But it is advertised as a “hygiene” product, which many doctors disagree with.

In a video in TikTok, Dr Gemma Newman, a London GP with a background in gynaecology, begs people not to buy it and not to use it.

Dr. Newman said, “You don’t have to use this after sex.

“If you want to wash up after sex, that’s up to you, but don’t put anything in your vagina, it’s self-cleaning and you’re disrupting your microbiome.”

‘It is not necessary.’

ER doctor and TikTok comedian Dr Maddy Lucy Dann also warned of the dangers of the “pointless” sponge on social media, saying it could do “harm”.

After being tagged in an ad for the “Dripstick,” Dr. Dann stressed to her followers that the inside of the vagina does not need to be cleaned.

She said: “Any product that suggests you should dry out or clean your vagina after sex is bizarre. Don’t use them.’

Dr. Dann criticizes the product for shaming women for going to the toilet after sex to clean up.

She said, “They embarrass and demonize perfectly normal behavior, creating a problem so they can sell you a solution.”

She suggests “gravity” and simply going to the toilet to clean up will do the job, adding: “Urinating after sex is also really important because it can clean the urethra and really reduce the risk of getting UTIs.” Reduce.’

The ‘Dripstick’ doesn’t just get hate for being unnecessary, though.

She said, “Inserting a dry sponge into the vagina can cause micro abrasions or tears, putting you at risk for irritation, BV, thrush.”

This is because the sponge can remove the healthy bacteria, disrupting the vaginal microbiome and natural PH of the vagina, creating the perfect breeding ground for infections such as thrush and BV.

The chances of developing thrush or BV also increase when the skin is irritated or damaged, this can happen if the sponge scratches or makes the area dry.

Dr. Dann, who has more than 940,000 followers, added, “If the person you’re sleeping with has a sexually transmitted infection and it’s present in the ejaculate, the Dripstick’s irritation and microtears can make you run faster that get an STD from your partner.’

The author of the book the Vagina Bible suggests in a TikTok video last year to simply clean up with a washcloth after sex.

With the product going viral again this week, Dr. Gunter has expressed how “sick” she is of the Dripstick company trying to “shame” women into “using a product you don’t need.”

In a TikTok video, she said, “There is no data to suggest in any way that cleansing the vagina with this Dripstick product would be good for the vaginal microbiome.

“In fact, we can say the opposite, because we know that any attempt to cleanse intravaginally is associated with damage to the vaginal ecosystem.”

She added, “Listen to experts, not people selling products.”

In an FAQ section on the “Dripstick” website, Awkward Essentials emphasizes that the vagina is self-cleaning and that the sponge should “only be used if excess semen is present.”

“If you don’t mind the drip or have other methods that work for you, fine.”

WHAT ELSE DID DOCTORS WARN WOMEN NOT TO INSERT THEIR VAGINAS?

In January 2019, the women’s magazine Marie Claire made a bizarre suggestion that parsley could induce menstruation.

Women may want their period to come earlier to control their cycle ahead of a holiday or special event.

According to the article, parsley is an emmenagogue — a substance that promotes menstruation — that can “soothe the cervix and smooth out hormonal imbalances.”

Doctors, including Dr Shazia Malik, a London-based obstetrician-gynaecologist, urged women never to put vegetables in the vagina as it could lead to health risks, including possible death.

Marie Clare has now apologized for the article and has removed it as being ‘misplaced’.

Experts urged women not to use trendy apple cider vinegar to tighten their vaginas in October 2017, after online blogs and forums encouraged women to perform the bizarre douching technique.

Apart from the fact that vinegar is totally ineffective at tightening the vagina, Professor Linda Cardozo of the Royal College of Obstetricians and Gynecologists in London warns that it can disrupt the organ’s delicate ‘good’ bacteria, putting women at risk of irritation and infections.

To maintain the strength and tone of the vagina, women should do regular pelvic floor exercises, advises Professor Cardozo.

Women who use intimate health products are more at risk for bacterial, fungal and urinary tract infections (UTIs), suggested research in April 2018 from the University of Guelph.

Vaginal sanitizer gels increase women’s risk of developing a genital bacterial infection by nearly 20 times and a yeast infection, such as thrush, by eight times, one study found.

Vaginal wipes doubled the risk of a urinary tract infection, while lubricants and moisturizers increased women’s susceptibility to thrush by 2.5 times, the study found.

A gynecologist condemned Gwyneth Paltrow’s suggestion for women to put jade eggs in their vaginas as ridiculous and dangerous.

Women, Paltrow explained in an interview with her “beauty guru/healer/inspiration/friend,” should be clutching the egg all day long to train their pelvic floor.

But acclaimed gynecologist Dr Jen Gunter warned in January 2019 that the whole idea is nonsense — and could even increase the risk of bacterial vaginosis or fatal toxic shock syndrome.

Doctors warned against this procedure after Mel B, 43, revealed she scraped out the inside of her vagina and put new tissue in after her acrimonious divorce from ex-husband Stephen Belafonte.

The procedure, largely unheard of until Mel B spoke out, could lead to a serious risk of infection, experts have said.

Dr. Jen Gunter – gynecologist, obstetrician and author of The Vagina Bible – told Refinery29 that women “should never, ever have their vaginas scraped” — or even douching — which cleans the vagina with a douche and liquid.

She said, “Some scraping of the vaginal epithelium [tissue] could affect the vaginal ecosystem and theoretically spread HPV locally and could make the woman more vulnerable to infection.

She added that the vagina regenerates itself every 96 hours and the surface cells are shed every four hours.

Doctors expressed concern in January 2019 that people would use bath bombs as sex toys.

Dr. Vanessa Mackay, spokesperson for the Royal College of Obstetricians and Gynecologists, told The Metro: ‘We would strongly discourage the use of bath bombs internally as they can disrupt the fragile balance of good bacteria in the vagina.

“This natural flora helps protect the vagina and disturbing it can lead to irritation, inflammation and infection, such as bacterial vaginosis or thrush.”