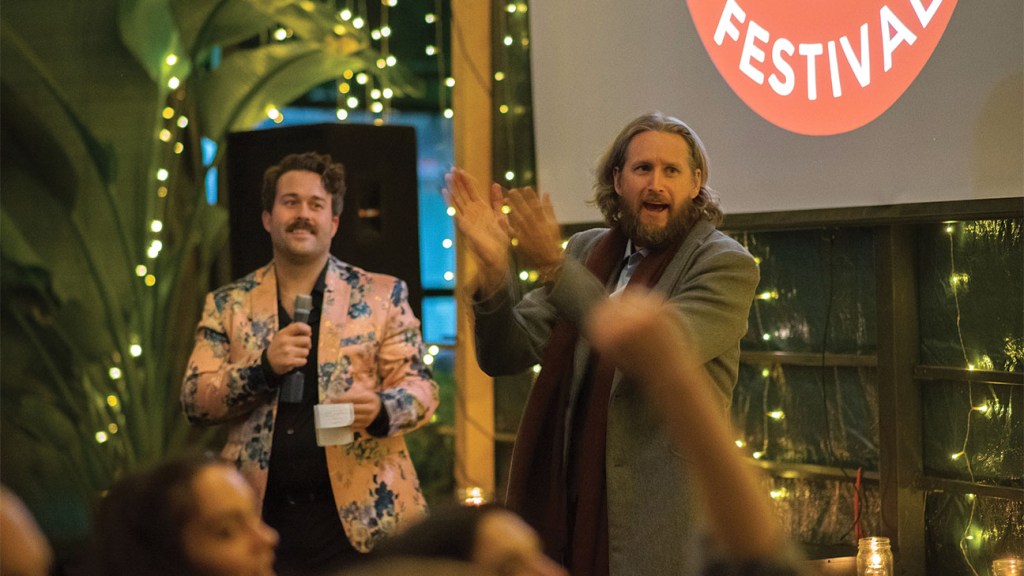 Los Feliz gastropub Messhall Kitchen has a new (and Hollywood-approved) item on its menu this November: a film festival.

It’s one that can’t happen anywhere else. The party features eight shorts, all produced and filmed entirely in Messhall over an eight-week period, created by talent who are either on staff or often at restaurant tables.

Messhall server Jon Bangle and bartender Andrew Pack, both creative multi-hyphens in their own right, came up with the party after researching the scene and noticing the potential of the talent pool. Their scheme received overwhelming interest and they were able to produce the shorts (seven comedies and one drama) over an eight-week period by leaning on overnight shoots when Messhall was closed. Add to that a small crew and no budget, which seems like an insurmountable task but became impossible, largely thanks to those regulars.

“Absolutely blown away,” says Bangle when asked how the films turned out. “Andrew and I were like, ‘Hey, we’re going to do this and hopefully it’s going to be good. It’s their job to make [the films] great and everyone brought their A game and delivered. Ecstatic is perhaps the best word that even comes close to describing the feeling. This won’t happen without the community that Messhall has built. There were many yeses we needed to make this happen and they just kept coming.

The Messhall Film Festival debuted in a private, invitation-only event on November 9, with public screenings scheduled for November 14, 16, 28 and 30. shows, with food and drink specials. Messhall also has a place in Hollywood history. Located at 4500 Los Feliz Blvd., the building was once home to legendary director Cecil B. DeMille’s iconic Brown Derby restaurant (featured in the 1996 movie Swingers).

“We all know the unique LA trope about a restaurant server hoping to be ‘discovered’ while waiting for a producer or director, but these brilliant guys broke the typical divide and brought regulars and staff together on a series of fun, frenzied nights of joint filmmaking,” Papert said. “I’ve been a regular at Messhall from the start, but taking part in this festival has really sparked my love for the venue and the people who work there.”

This story first appeared in the November 16 issue of The Hollywood Reporter magazine. Click here to subscribe.

What should LGBTQ football fans expect at the World Cup in Qatar? A guide.