How to survive an avalanche, from making your way through the snow to making an air pocket 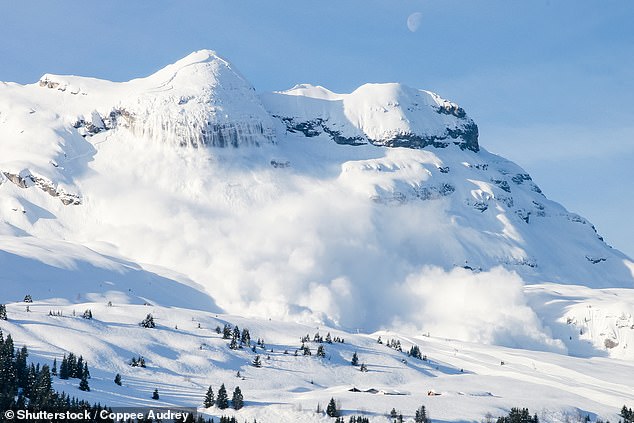 According to National Geographic, an average of 150 people die each year from avalanches around the world.

Here’s what to do to give yourself the best chance of survival should you ever get caught up in one.

DRAW THE ATTENTION TO YOURSELF

Warn others of your presence in the first seconds after an avalanche has started. Bruce Goodlad, Alpine Safety Advisor to the Ski Club of Great Britain, tells MailOnline Travel: ‘If you feel like you’re going to be caught in an avalanche, scream and scream. You want to make sure someone sees you’ve been caught and in which direction you’re being carried.’

As soon as you find yourself in the path of an avalanche, shout and shout to let others know what is happening and in which direction you are being carried

Stuart Macdonald, mountain guide and director of Avalanche Academy, an organization that offers avalanche safety courses in France, agrees. He says, “Try yelling to warn your teammates. They may not have seen you got caught.’

You must immediately do your best to ski out of the avalanche as it descends the mountain, Macdonald explains. He says, “Try skiing to shore. When an avalanche first starts sliding [it’s] Bee [its] the slowest, however, they speed up quickly.’

Goodlad weighs in: “You’ll never outrun it… in reality you have very little control if you don’t manage to ski right out of the avalanche.” He adds, “The skill level of those you see skiing out of avalanches is much higher than most skiers.” 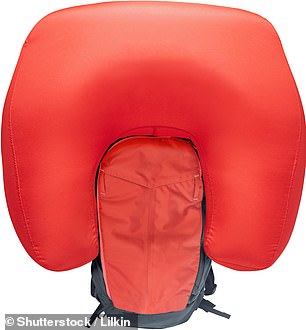 It is recommended that off-piste skiers and snowboarders carry an avalanche airbag, a device that inflates when you pull a cord, to avoid being completely buried in snow. Goodlad says you should inflate your airbag “immediately” if you realize you’ve been caught in an avalanche. He explains, “Once you move, you may not be able to get to the lever. Airbags increase your chances of survival by up to 50 percent, provided you don’t die from trauma.’

He does note, however, that ‘the statistics in North America are not so good because the tree line is much higher’. He says, “If an avalanche lands you in trees, it doesn’t matter how good your rescue equipment is – the outcome is probably not going to be positive.”

“If you get knocked off your feet, try kicking off your skis, [otherwise] these will act as an anchor [and pull you down],” reveals Goodlad.

However, Macdonald notes that it’s “easier said than done” to kick your skis out. Your chances of removing them are better if your bindings aren’t too tight, he explains. Snowboarders probably won’t be able to take their snowboard off because their boots are normally tied in bindings with multiple straps.

Ski poles also help you pull into the snow.

“If the avalanche starts to drag you down the mountain, put your ski poles away,” Macdonald advises, adding, “Here’s why you shouldn’t ski with your wrist straps on when you’re off-piste.”

GO TO THE SURFACE

If you’re pulled under the snow, it’s necessary to “fight as hard as you can to get to the surface,” according to Goodlad. He adds, “If the avalanche starts to slow down, try to hit the surface.”

Once the snow has settled, it’s wise to create an air pocket around you to give you room to breathe and conserve oxygen, explains Snow Safe, supplier of avalanche safety kits. It says, “If you put your hand over your mouth while you’re caught in an avalanche, you’ll create an air pocket.”

A 2016 study found that people who became buried under snow with an air pocket were more likely to survive an avalanche. 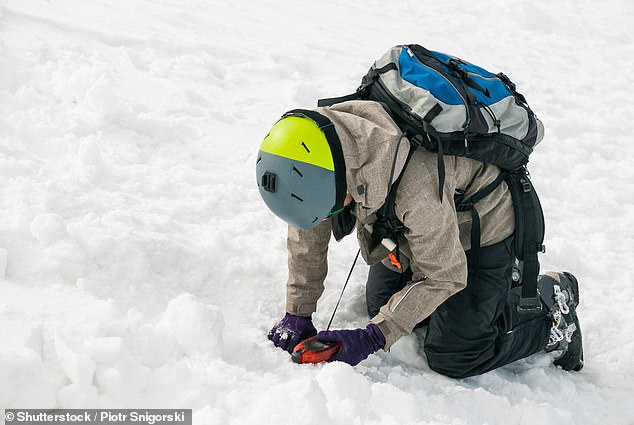 If you wear an avalanche beacon, a search team can track down where you are buried

There are three survival kits that Goodlad and Macdonald say every off-piste skier should carry with them at all times.

The first is an avalanche transceiver, a device that transmits a signal that can be picked up by other transceivers, allowing the search and rescue team to pinpoint a person’s location. The other two tools are used by those trying to rescue buried skiers: an avalanche probe, a fishing rod pushed through the snow to find buried skiers, and a shovel, which fellow skiers can use to dig people out of the snow.

Goodlad says, ‘You have to be armed with the knowledge of how to use [them] and exercise regularly.’

WHAT TO DO IF YOU ESCAPE

If you’re lucky enough to make it out alive, Goodlad says it’s essential that you get to the hospital right away. He explains: ‘If someone has been hit by an avalanche, they should be checked in hospital because of the risk of secondary drowning – the body can react to breathing in cold snow by producing fluid in the lungs.’

… AND FIRST OF ALL HOW TO PREVENT AVALANCHES

Ninety percent of people who die in avalanches trigger them, Goodlad reveals.

Here’s how to prevent this from happening. 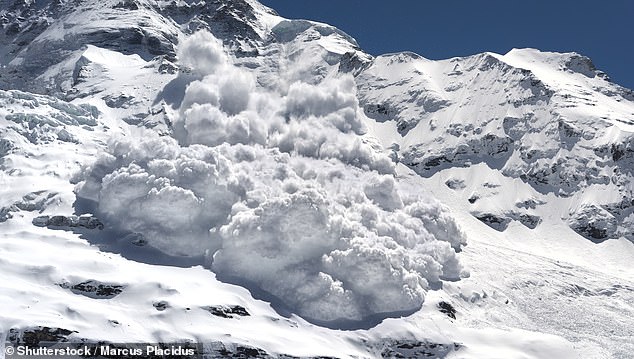 Bruce Goodlad, Alpine Safety Advisor to the Ski Club of Great Britain, reveals that 90 per cent of people who die in avalanches are caused by them

A five-point danger scale is used on the avalanche forecast that refers to the size, scale and geographic location of the avalanche danger, Goodlad reveals. One is ‘low’, two is ‘moderate’, three is ‘significant’, four is ‘high’ and five is ‘extreme’.

Goodlad puts this danger into perspective, saying, “If I said you were likely to be stabbed walking down that dark alley, would you go?” Skiers go off-piste all the time in these conditions without any real consideration of the conditions or an understanding of the terrain that would minimize their risk.”

STAY ON THE SAFER SLOPES

Avalanches don’t usually occur on slopes less than 30 degrees, Goodlad reveals. For reference, he notes that “a red run will have sections of 30 degrees or more.” Recognizing what a 30 degree incline feels like is a ‘powerful tool; to stay safe,” he says. 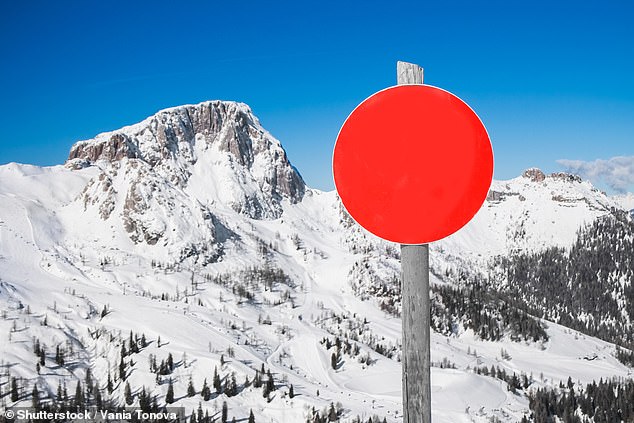 On slopes with a slope of less than 30 degrees, the chance of encountering an avalanche is small. For example, a red run has sections of 30 degrees or more

Goodlad continues, “Thirty-eight degrees is the most common angle to get caught in an avalanche. Thirty-eight degrees on hard snow can feel quite steep, but on soft snow it feels much less steep, which is one of the factors that contribute to people getting into new snow in avalanches – it’s fun.”

He also recommends avoiding “terrain traps” that could “amplify the event of an avalanche” if one does occur. Common terrain traps include gullies and depressions, trees, rocks, cliffs and crevices, Goodlad reveals.

Finally, Goodlad suggests taking an avalanche safety course before hitting the slopes. He says, “Not only will it keep you safer, it will help you ski better.” He adds that the Ski Club of Great Britain’s avalanche safety videos also contain useful tips.