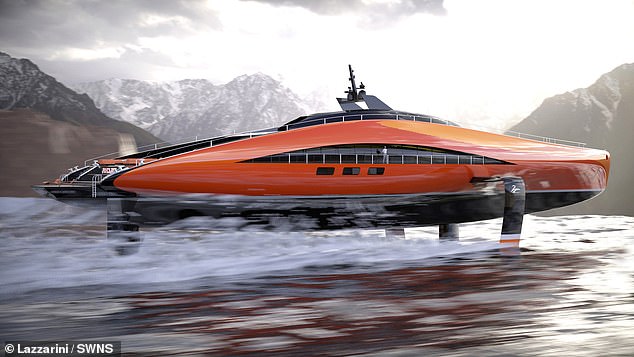 A 242-foot luxury yacht is designed not only to take you out on the high seas, but also to ‘fly’ above the water – as long as you have £70 million to spare.

The impressive design concept – called the Plectrum – was released by the Rome-based Lazzarini Design Studio.

Made of dry carbon fibers that make it extra light, the Plectrum uses a foil system so it can rise above the waves and glide over the water at speeds of up to 75 knots.

The superyacht’s hull mimics the shape of the latest design of Prada’s 2023 America Cup sailboat models.

Italian makers of the Lazzarini Design Studio have released their latest concept yacht, the Plectrum (pictured) 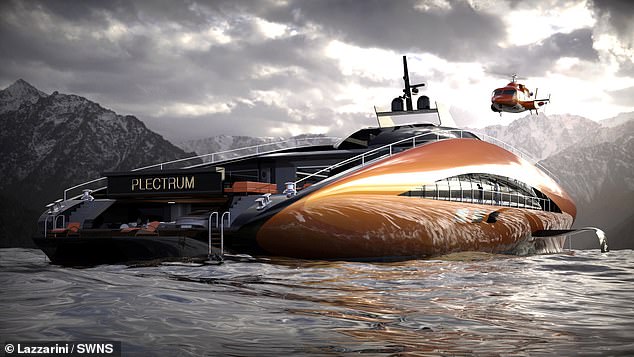 The luxury 242ft yacht is not only designed to take you on the high seas, but also to ‘fly’ above the water

Thanks to its three hydrogen engines, each with a capacity of 5,000 hp, it can lift itself above the water surface.

The foil system can be adjusted depending on sailing needs and can change the width from 49ft (15m) width, with the foil closed when the yacht is moored, to 65ft (20m) width while the yacht is cruising at high speed.

The flexible design results in “a different superyacht configuration that allows for much faster sea travel than conventional vessels of a similar size,” explains designer Pierpaolo Lazzarini.

The four-story yacht has six guest cabins, a ship owner’s cabin, a swimming pool and a helipad.

It also has a helicopter hangar, a central garage that fits two tenders and a rear garage for water toys and a supercar.

At the moment, the yacht remains a concept boat with no set release date to market. 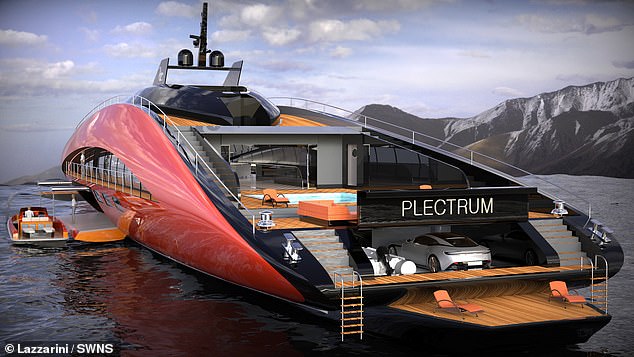 Made from dry carbon fibre, making it extra light, the Plectrum uses a foil system to rise above the waves and glide over the water at speeds of up to 75 knots 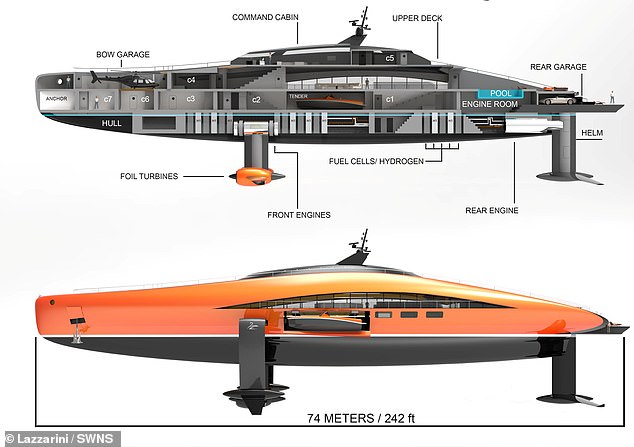 The four-story yacht has six guest cabins, a ship owner’s cabin, a swimming pool and a helipad. Pictured: Features of the pick

Who is Pierpaolo Lazzarini and what does he design?

His company, Lazzarini Design Studio, based in Rome, supports entrepreneurs at the start of their design process or prepares projects for the market.

When creating concept designs, they use a number of 3D technologies and software to create highly detailed images and videos.

The company works on everything from yacht design, automations, product designs and even floating architecture.

Foiling refers to the use of hydrofoils that attach to the hull of fast boats, which help lift a moving boat and reduce drag.

This provides additional lifts when the boats reach planning speeds.

By installing the hydrofoil, the hull can be lifted completely out of the water.

The Italian creation is said to be a ‘super light yacht’ fully assembled and built with dry carbon fiber composite materials, enabling it to reach its high speeds.

Lazzarini explains: ‘The Plectrum is a concept that can be built on demand with a budget of 80 million euros.’

However, it is not the first futuristic yacht Lazzarini has designed.

Last year alone, he designed three breathtaking yacht designs, all with weird and wonderful features – and they all cost millions.

One of these designs was the Air Yacht.

The extravagant design, also made of dry carbon fiber, was able to reach 60 knots thanks to four solar-powered electric propellers and two helium-filled zeppelins, enabling it to fly, hover and float on water as well.

It can stay airborne because its blimps are inflated with a lighter-than-air gas – in this case helium – as it gains momentum from its massive propellers. 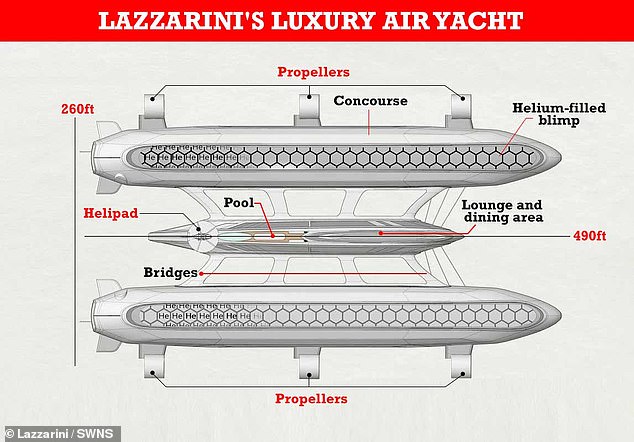 The total length of the dry carbon fiber structure would be nearly 300 feet (150 meters), with a width of 260 feet (80 meters), while the central main deck would be 260 feet long and 30 feet (10 meters) wide. Passenger suites go around the hall of both zeppelins 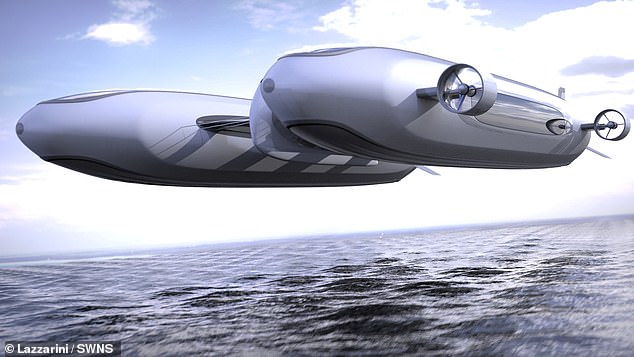 The sky yacht has all the trappings of a prestigious boat, but takes to the skies thanks to two huge blimps, which look a lot like zeppelins

According to Lazzarini, the craft could fly for more than 48 hours at a maximum speed of 60 knots – nearly 70 miles per hour.

There wasn’t an exact price tag on the Air Yacht, unlike the Plectrum, but the designer said it was made in the back of people’s minds with hundreds of millions to spare.

March also saw the release of a design for Lazzarini’s £418 million Sovrano, which means sovereign in Italian.

The huge boat is a hybrid mix of a private yacht and a cruise ship. 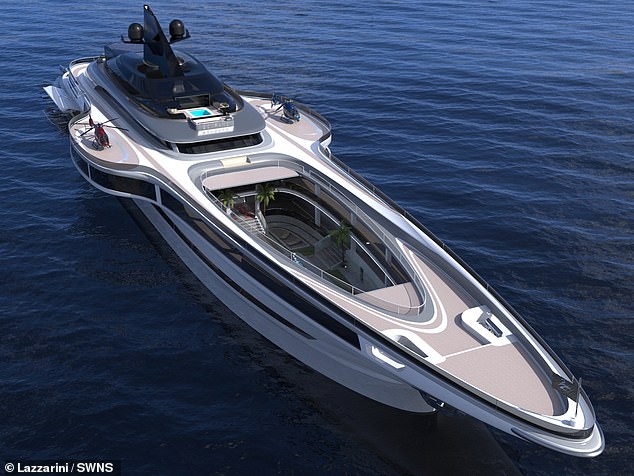 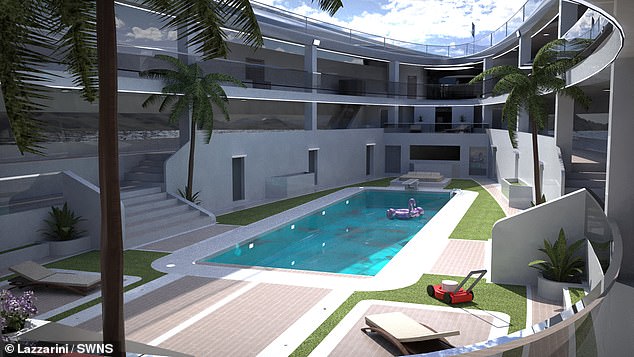 Above is the sunken oasis on the ship, where palm trees surround a swimming pool and access to a gym

Owners can decide whether to use an electric motor or a hybrid propulsion system, which allows them to travel at 18 knots (20.7 mph) or 31 knots (35.6 mph).

If ever built, it could become the widest yacht in the world.

With the ability to accommodate 50 guests indoors, in 20 private suites, the five-deck yacht also features a sunken oasis where palm trees surround a swimming pool.

It also has quarters that can accommodate up to 60 crew members.

The designer said the outrageous yacht would suit either an incredibly wealthy person or a group of owners who want to privately travel the world.

Analysis | What tanks will Ukraine get and why does it want them?