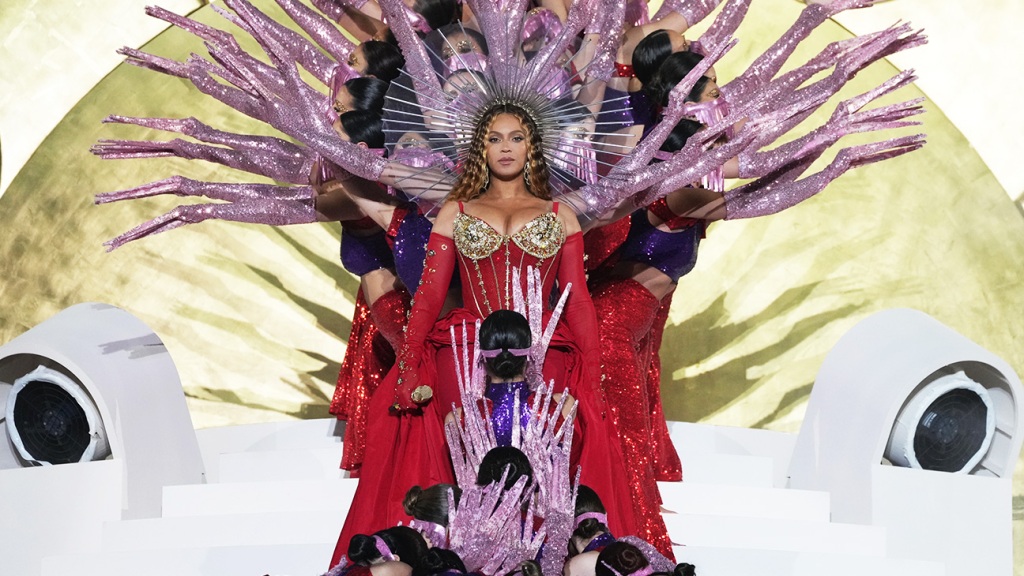 Beyoncé performed her first live show in over four years, singing tunes she rarely does on stage and duetting with daughter Blue Ivy Carter.

The Grammy-winning star gave a nearly 75-minute performance in Dubai on Saturday to launch the city’s new luxurious and lavish hotel, The Atlantis Royal. Attendees at the invitation-only event included her husband Jay-Z, parents Tina Knowles-Lawson and Mathew Knowles and her three children, as well as celebrity guests, influencers and business people associated with the hotel.

“My beautiful children are here to see their mother perform,” Beyoncé told the audience.

Blue Ivy, 11, received loud applause from the crowd as she took the stage to open with the song “Brown Skin Girl,” her collaboration with her mother that won them both a 2021 Grammy Award.

“Where are all my brown-skinned girls? Give it up for my baby, my brown skin girl, Miss Blue Ivy Carter,” Beyoncé said.

Blue Ivy — who made a cameo appearance during her mom’s performance at last year’s Academy Awards — wore a red suit and sneakers, and her mom touched her face as she sang the song that celebrates dark- and tan-skinned women. They also performed a choreography together.

In an airy, bright yellow ensemble, Beyoncé kicked off the concert with her version of Etta James’ “At Last,” which she famously covered in 2008 when she played James in Cadillac records. Beyoncé also performed the classic song at Barack Obama’s first dance with Michelle Obama on the night of his inauguration in 2009.

“Welcome everyone. I am so honored to be here,” she told attendees, who were not allowed to record video or take photos of the concert.

Beyoncé didn’t sing tunes from her latest album, Renaissance, but she sang songs she hasn’t performed in a long time, including “Beautiful Liar,” “I Care,” “Ave Marie,” and “Flaws and All.” She gave a mostly soft, acoustic-style set throughout the concert.

The singer performed alongside a full band, several backup dancers and the 48-piece all-female orchestra Firdaus – all dressed in bright red. The Mayyas, the all-female Lebanese precision dance troupe that won America has talent also performed last year and stunned the audience. And fireworks erupted in the sky and from the sides of the luxury hotel.

But Beyoncé also brought the energy.

After returning for her third ensemble – this time in a tight red dress and long red stockings – she emerged to sing “Crazy In Love”, beginning with the slowed down, remixed version of the hit. But then Sasha Fierce fell for it and Beyoncé, the dancer, lived. She then lured the crowd with upbeat songs like “Countdown” and “Naughty Girl” and danced in the water while singing the hit “Drunk In Love.” She ended the concert with the national anthem as she soared into the sky as a fireworks display was underway.

Beyoncé also sang “Halo,” “XO,” “Be Alive,” “Freedom,” “Spirit,” and “Bigger.” She mixed some of Camp Lo’s 90’s hit ‘Luchini AKA This Is It’ with ‘Flaws and All’ and on ‘Naughty Girl’ she weaved in some of British Indian musician Panjabi MC’s hit ‘Mundian To Bach Ke’ from 2000. which set the audience on fire (Jay-Z appeared on the remix, helping the song become popular in the United States).

“Where are my bad girls?” she asked the audience.

Beyoncé also got a loud roar after shaking her hips on her Shakira featured song “Beautiful Liar.” The singer wore designs by Atelier Zuhra from Dubai, Nicolas Jebran from Lebanon, Frolov from Ukraine and Dolce and Gabbana. Veteran choreographer Fatima Robinson contributed to the live show.

The private concert has had the city of Dubai buzzing for months – and social media exploded this week with several rumors about Beyoncé set to perform in the city. Guest participants included Kendall Jenner, Rebel Wilson, Ellen Pompeo, Winston Duke, Letitia Wright, Liam Payne, Chloe x Halle, Bar Refaeli and Swedish House Mafia, who performed at the hotel after Beyoncé.

Beyoncé last performed live in December 2018. Her concert in Dubai takes place two weeks before the 2023 Grammy Awards, where she is nominated for nine awards and can set a record by becoming the most decorated Grammy winner of all time.