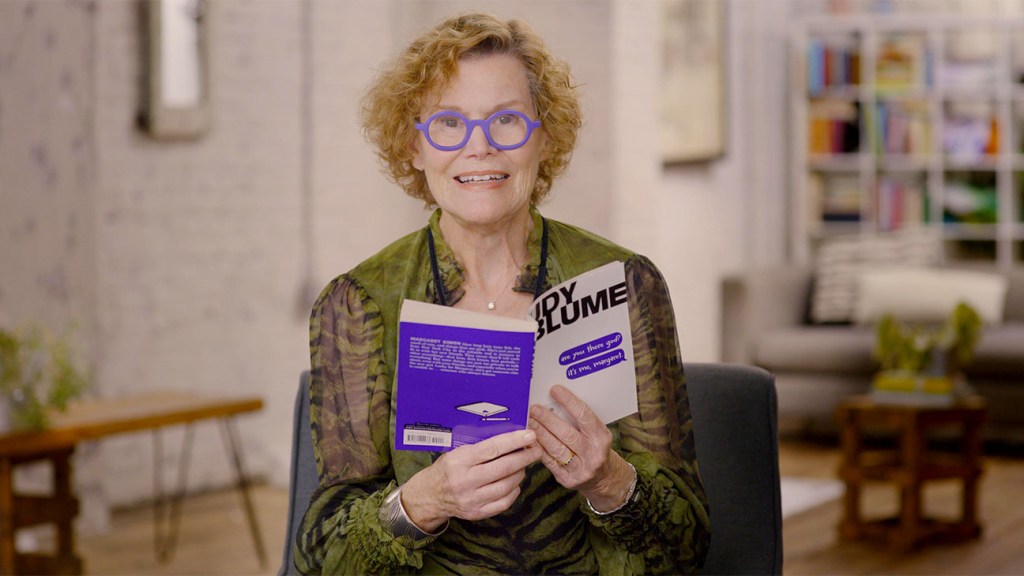 Where would we be without Judy Blume? The writer wrote dozens of works that encouraged generations of young people to stay curious about their bodies, ask questions, explore and be brave. Are you there God? It’s me, Margaret — a classic if there ever was one — portrayed the anxieties of puberty and hallowed a very important rhyme: “We must, we must, we must enlarge our bust!” Margaret and her friends sang to make their breasts grow bigger. Blubber gracefully dealt with elementary school bullying and complicit bystanders. Tiger Eyes observed a young woman venturing through the unpredictable battle of grief.

Growing up, I borrowed Judy Blume books from the library and collected them as contraband. The novels were a marvel to my sheltered high school self: How could an adult speak so candidly and accurately about my bodily experiences? I know I’m not the first Blume fan to feel this way and – especially when people see Davino Pardo and Leah Wolchok’s doc Judy Blume forever — I certainly won’t be the last.

A loving – and topical – portrait of a beloved author.

The documentary, which premiered at Sundance and will stream on Prime Video on April 21, is part of a revival campaign of sorts for Blume. Last November, Netflix bought a series version of Forever by Mara Brock Akil. And this spring, Lionsgate is releasing an adaptation of Are you there God? It’s me, Margaret with Abby Ryder Fortson, Rachel McAdams and Benny Safdie. Judy Blume forever is a loving portrait of the author and an overview of her influence. It’s also an introduction to this revival, a short but satisfying guide to the author and her reach.

The film opens with a montage of collected news footage and fragments of interviews, all of which confirm and underline her enduring popularity. A required biographical sketch follows. Blume (née Judy Sussman) grew up in Elizabeth, New Jersey, her childhood marked by fear of World War II. As a child, she was plagued by fear and the creeping sense that adults, especially her mother, were hiding secrets from the children. Listening to Blume recount her younger years, it makes sense that when she started writing later in life, she identified primarily with that age group. Kids were direct and honest. Rarely did they pretend in the same way as adults.

Blume himself pretended for a while. She attended New York University, where she met her first husband John Blume. They got married five weeks after her father’s death, leaving the writer with a mix of emotions she couldn’t process for years. The newlywed couple moved into a house on a suburban cul-de-sac populated by husbands who played golf and wives who didn’t work. For a while, Blume says in these candid interviews, she tried to be the perfect housewife. But she was bored. The decision to write came from a desire to do more with her time and a desperate need to tell stories.

It’s satisfying to hear Blume, a sharp woman with a winking sense of humour, talk about her path to writing. Her winding trajectory into the medium and her challenging journey to leverage her craft are a refreshing contrast to today’s system of publishing, which rewards the young, gifted and confessed. In these reflective interviews, Blume speaks openly about wanting to prove her opponents wrong. She faced numerous rejections before publishing The one in the middle is the Green Kangaroo (1969), Iggie’s house (1970) and her huge success Are you there God? I’m Margaret (1970). It’s the latter, a book about an 11-year-old girl navigating her religious identity and the tumultuous terrain of adolescence, that made Blume a household name.

Pardo and Wolchok impressively intertwine Blume’s early career censorship battles with the recently renewed movement to ban books. Several of Blume’s own novels such as Are you there, God? It’s me, Margaret, Blubber and Then again, maybe I won’t have been banned on and off throughout her career. The author, who now owns a bookstore in Key West, has remained a staunch advocate on this issue and more.

Sprinkled all over Judy Blume forever are a series of contemporary writers, celebrities and fans who speak about the author’s influence on their artistic and personal development. Novelists Mary HK Choi, Jacqueline Woodson, and Jason Reynolds, as well as Lena Dunham and Samantha Bee, are among the familiar faces. Their testimonials provide additional evidence of Blume’s powerful effect on the children’s and young adult publishing world, reminding viewers how still so few of these books treat their readers as human beings rather than as ideological vessels.

However, the interviews I treasured most were those with Blume’s (now older) fans, some of whom wrote hundreds of letters to the author. This correspondence, now held in the Yale University Archives, depicts Blume’s impact on an individual level. For years, her books have helped young people negotiate their identity and feel less alone. Fans of her novels wrote lengthy letters of confession asking for her ear or advice. To hear Blume re-read some of these notes, to see the emotions flash across the faces of the children (now adults) who wrote to her, is to witness a kind of magic.

Lucy creeps! View the sweetest family photos of Andy Cohen with his 2 children