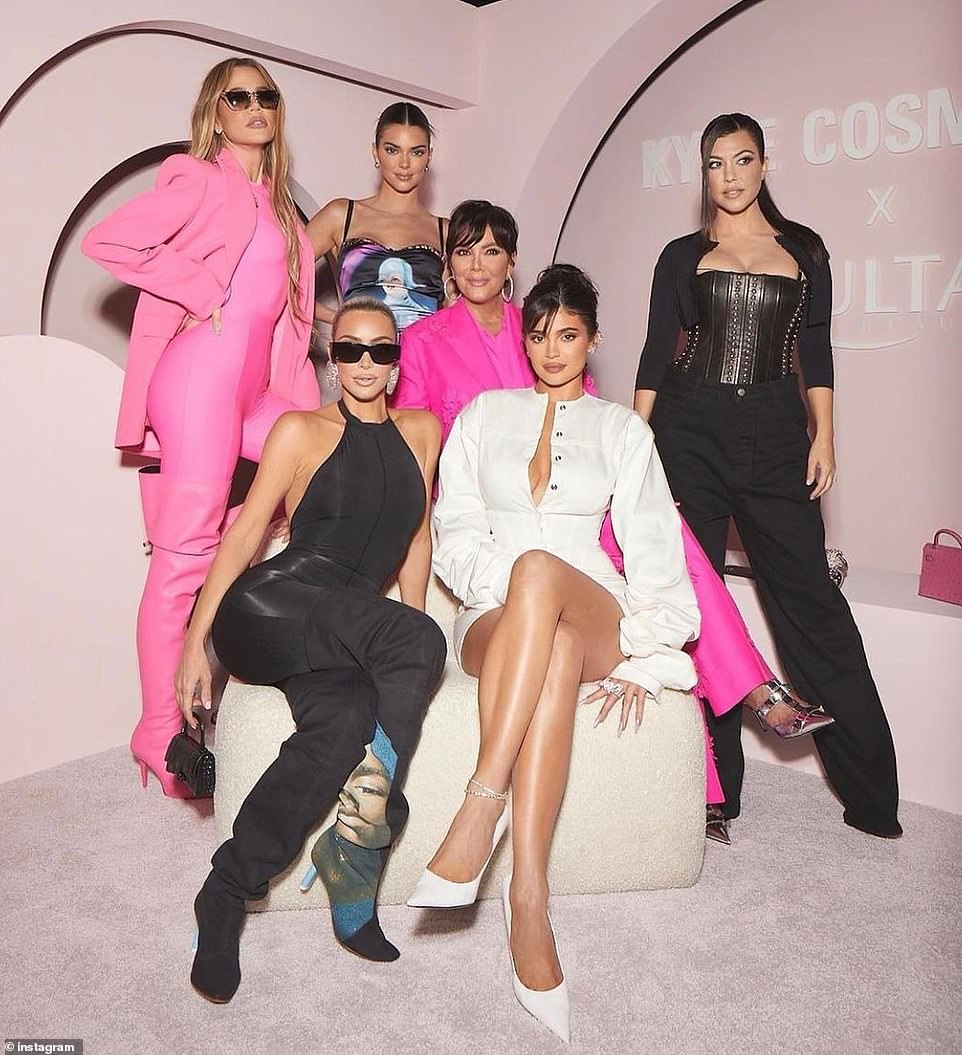 With their bold fashion choices and iconic trend-setting looks, the Kardashian-Jenner clan have some of the most coveted wardrobes in Hollywood.

More than a year after listing their used designer pieces for resale at their first brick-and-mortar pop-up shop in Las Vegas, DailyMail.com can reveal the ‘Kardashian Kloset’ – located inside the Fred Segal boutique in the Resorts World hotel on the Las Vegas Strip –  appears to be drawing more criticism than customers.

The ultra-wealthy family launched the first retail location for their resale site in June 2021, allowing fans to shop luxury clothing, shoes, and accessories items from the sisters’ and momager’s personal collections.

Some items rake in top dollar. ‘We sold a Birkin bag owned by Kylie Jenner for $100k,’ an insider told DailyMail.com.

The Kardashian Kloset store in Las Vegas seems to have drawn more criticism than customers since its launch in June 2021, DailyMail.com can reveal 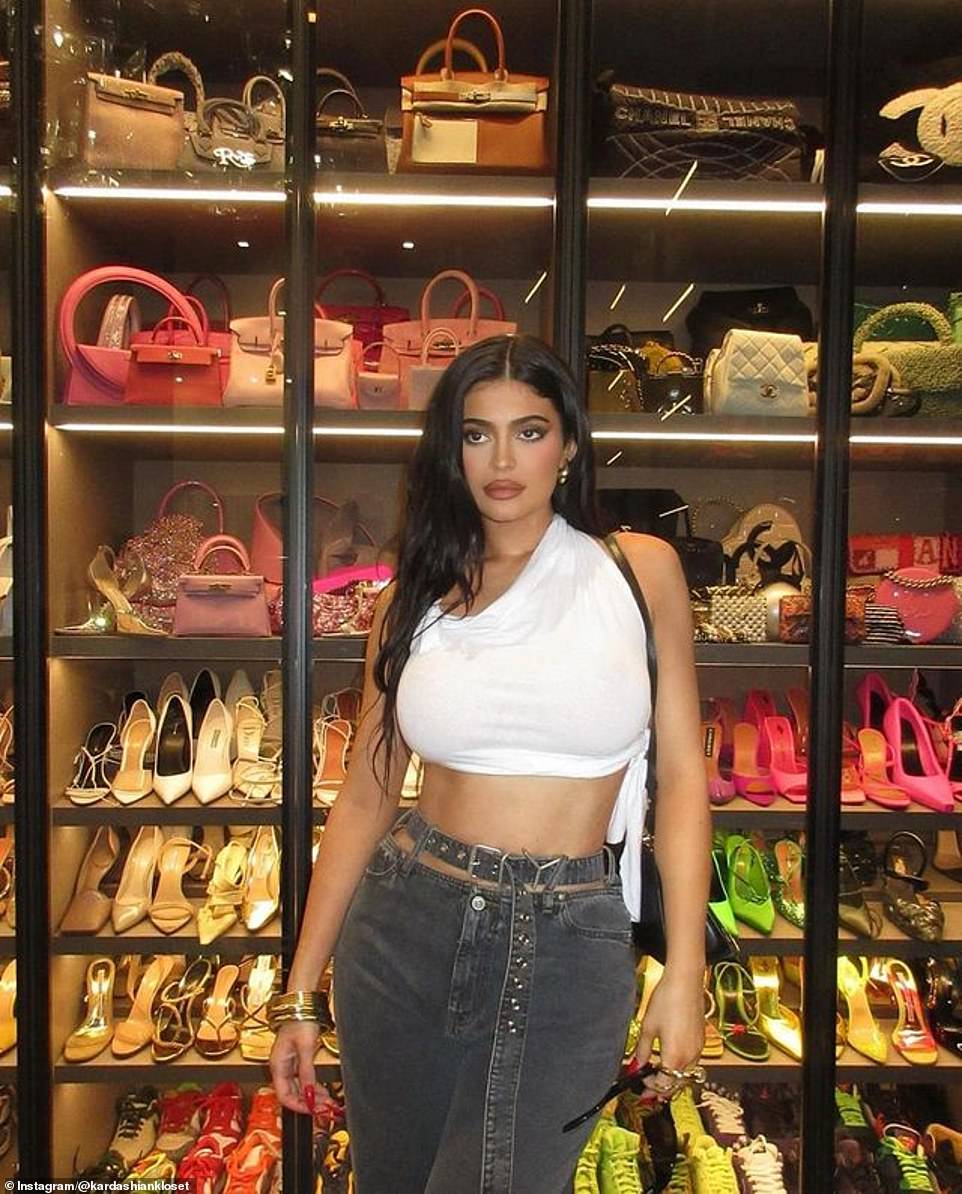 The Kardashian-Jenner clan last year announced the launch of the first and only brick and mortar store where fans could shop for pieces from the reality stars’ personal closets in person. Pictured: Kylie Jenner shows off her impressive shoe and handbag collection from her wardrobe 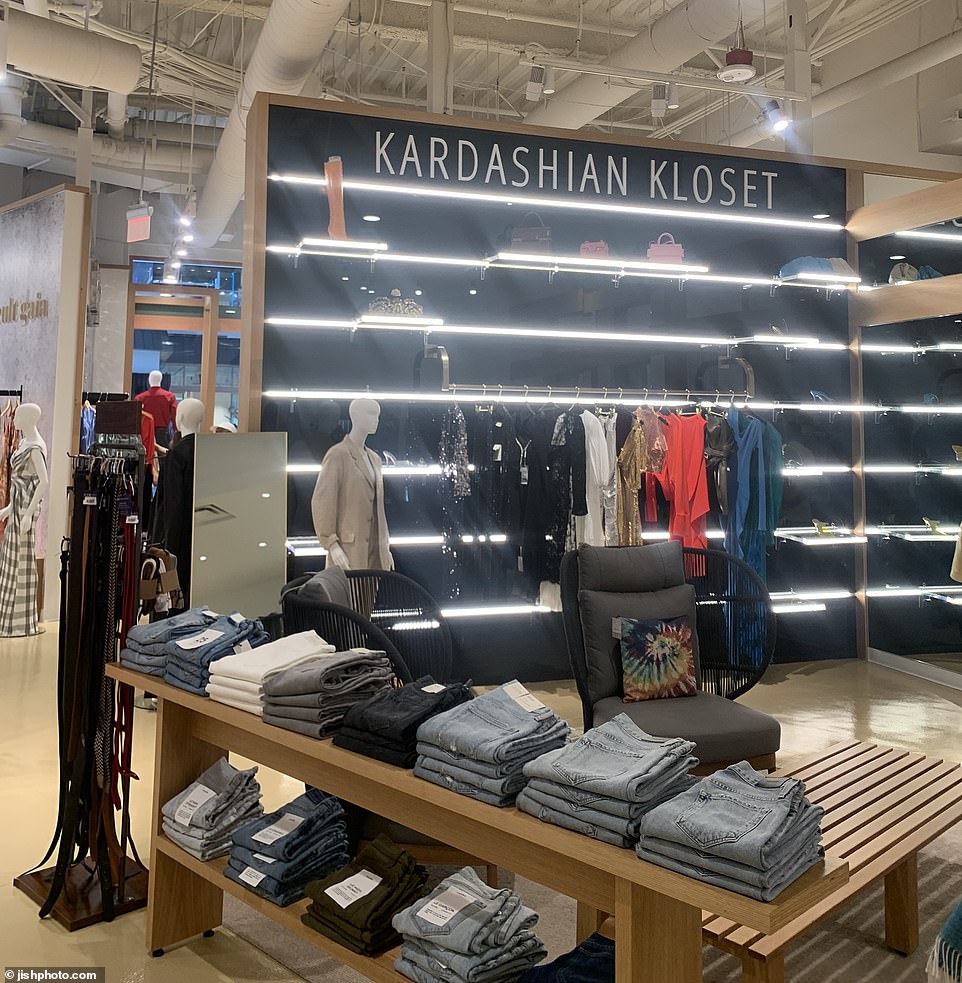 ‘But if the profits went to charity instead of to the family it would be busier,’ said the source.

‘We get negative feedback like, “God, how much money do they need?”‘

According to the source, some customers have been put off by the Kardashians’ decision to sell their used clothes at exorbitant prices. Many of the designer handbags and shoes are already available at significantly lower prices at retailers or other luxury consignment stores, DailyMail.com can reveal.

Among the products listed for sale when DailyMail.com visited the store was Kris Jenner’s pink Givenchy Mini Alligator Horizon handbag for $22,000.

The same purse without the Kardashian connection, however, is also available at a considerably lower price on online luxury consignment store The Real Real, where it’s listed for $12,800.

Kourtney’s blue pair of Bottega Veneta sandals were being sold for $1,690 – another steep price for shoes that can be purchased new at Bergdorf Goodman for $950.

At $1,695, Kylie’s already-worn woven Bottega Veneta mules are also listed slightly higher than their retail price on the designer website where they cost $1,650.

Staff at the Vegas store say they never see any members of the Kardashian clan. Instead the designer goods are delivered by assistants. 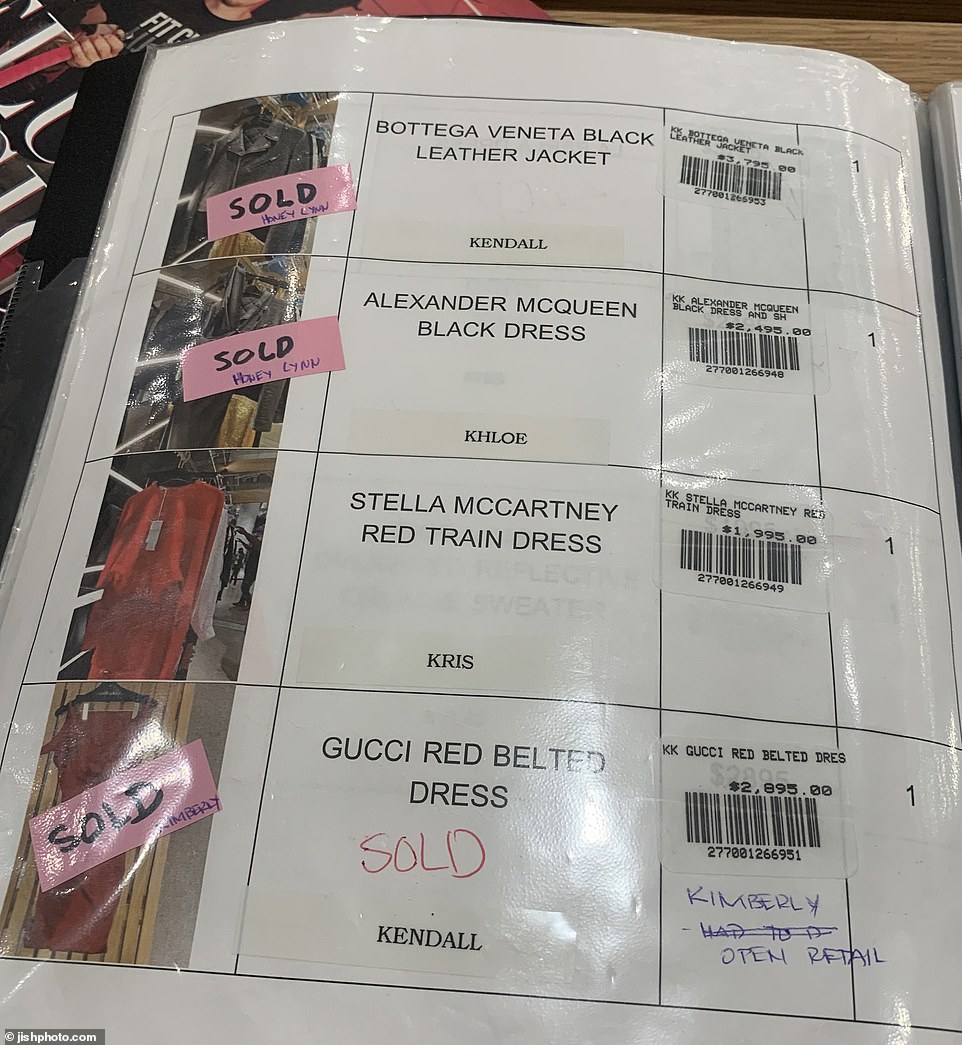 DailyMail.com thumbed through the most recent Kardashian Kloset catalog where recently sold items include Kendall’s black Bottega Veneta leather jacket for $3,795 and her red Gucci belted dress for $2,895, as well as a black Alexander McQueen dressed previously owned by Khloe for $2,495 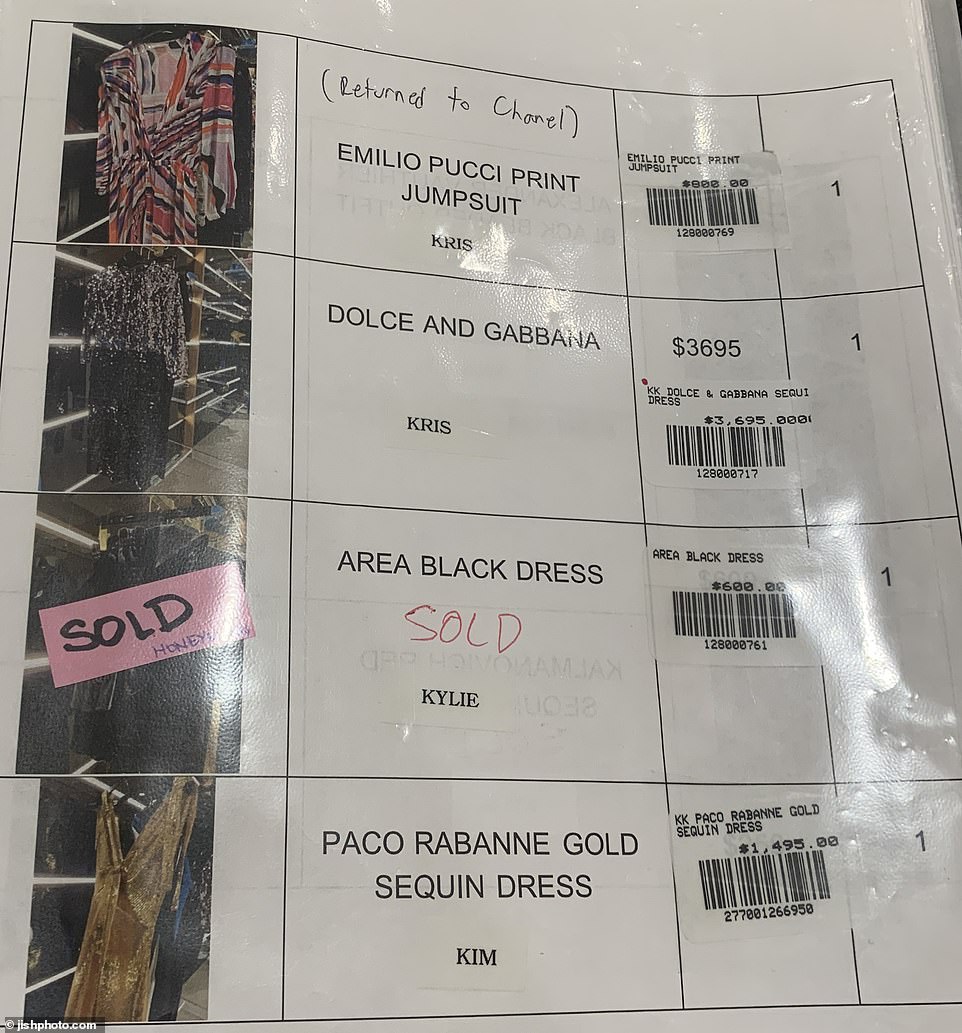 Kylie’s black Area Dress is marked as sold for $600 on the catalog, which includes Kim’s Paco Rabanne gold sequin dress for $1,495, and two pieces from Kris’s collection 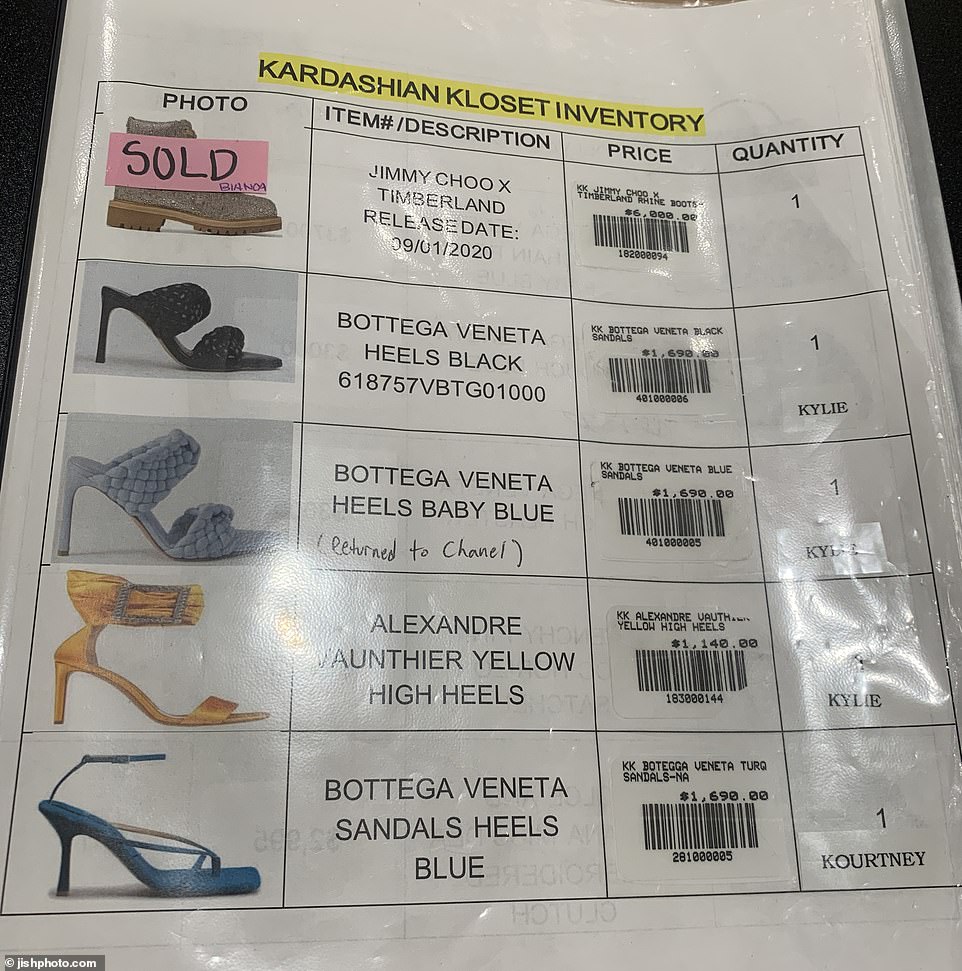 A pair of rhinestone Jimmy Choo Timberland boots were recently sold for $6,000, but several pairs of Kylie’s Bottega Veneta heels remain for sale. Kourtney’s Bottega Veneta sandals which she has been seen wearing in different colors are also available for $1,690 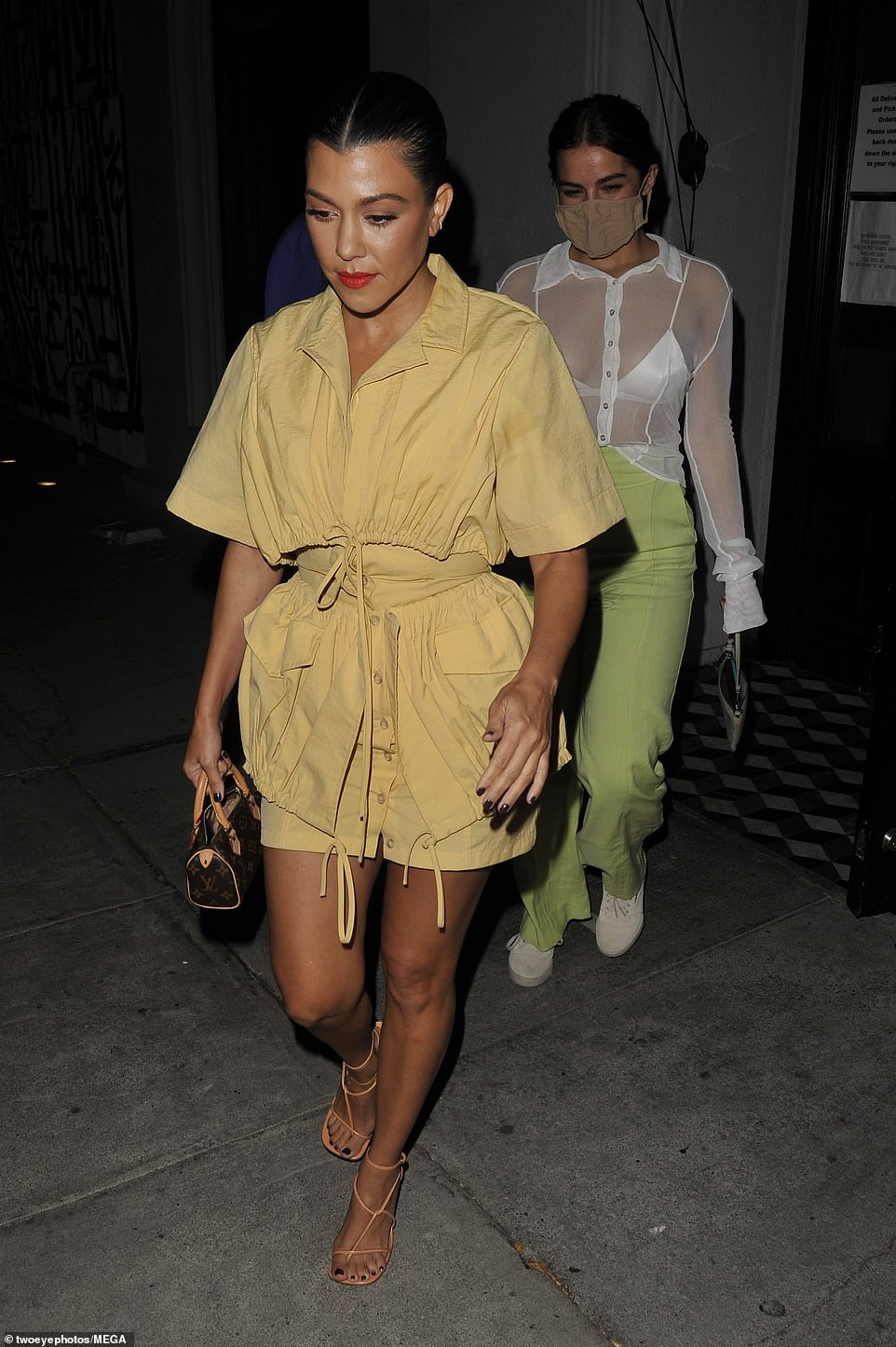 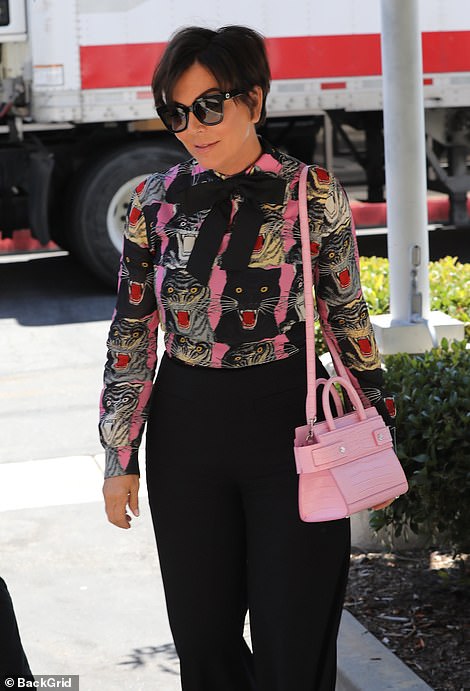 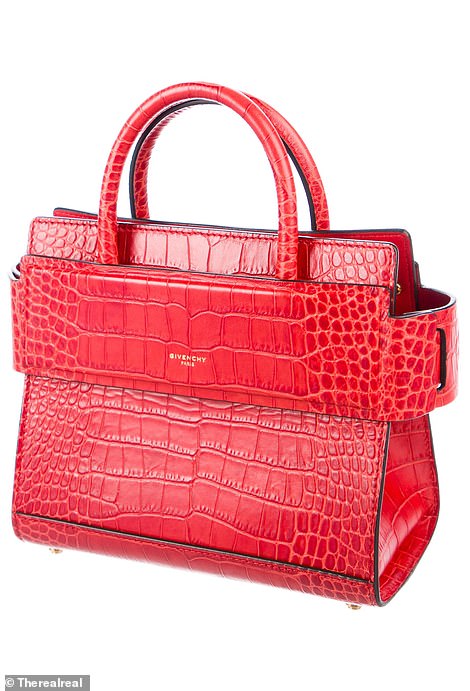 Kris Jenner’s Givenchy Mini Alligator Horizon handbag (seen left on the momager in 2017) has been listed for a hefty $22,000. But the designer purse – albeit not Kardashian-owned – can also be purchased at considerably lower price on online luxury consignment store The Real Real where it’s being sold for $12,800 (right) 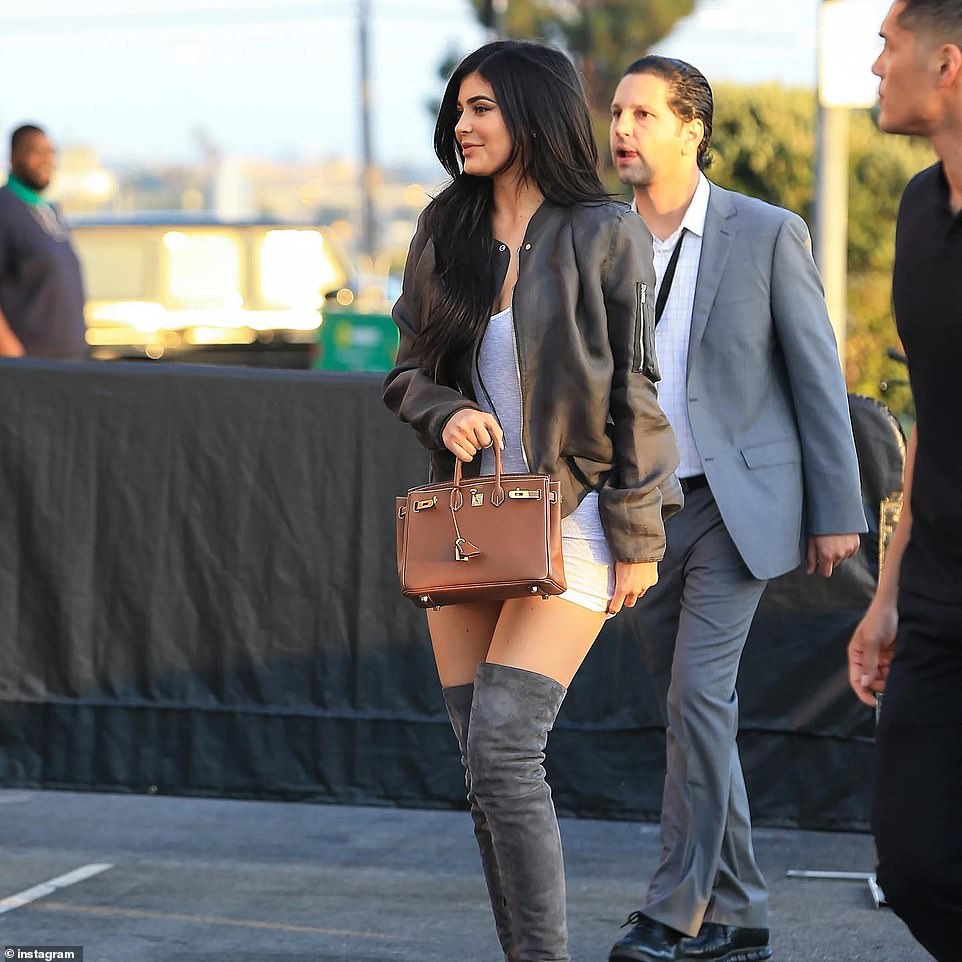 Just last month the store sold a Birkin bag previously owned by Kylie Jenner for an eye-popping $100,000, an insider revealed. The 25-year-old is pictured with one her handbags that is now being sold on the resale website

DailyMail.com thumbed through the most recent Kardashian Kloset catalog where a single page listing six designer handbags that  formerly belonged to Kris and Kylie  had an asking price of more than $50,000.

For fans wanting the cachet of owning a piece of Kardashian history the items may be worth the splurge, but for many, the business venture appears to be another scheme to further enrich the famous family, who already have a collective net worth of over $2billion.

With sales associates earning three percent commission on the designer goods, a job at the pop-up store would appear to be lucrative gig. The Birkin bag would have landed $3,000 instantly in to the pocketbook of the person who handled the sale.

When the items arrive at the store, they are inventoried along with notes including descriptions for each item and the name of which Kardashian or Jenner owned it.

According to the source, Malika came in the store and sat down with the look book and began updating Khloe, 38, on what items of hers were selling and for how much.

Kris came under fire for allegedly forgetting she owned a Beverly Hills condo, admitting the property was being used only to ‘store champagne and wrapping Christmas gifts.’

But the family’s Kardashian Kloset business seems to suggest they are not as laissez faire when it comes to managing their assets as they made it seem on the show.

They may be billionaires, but they are on top of every last penny. 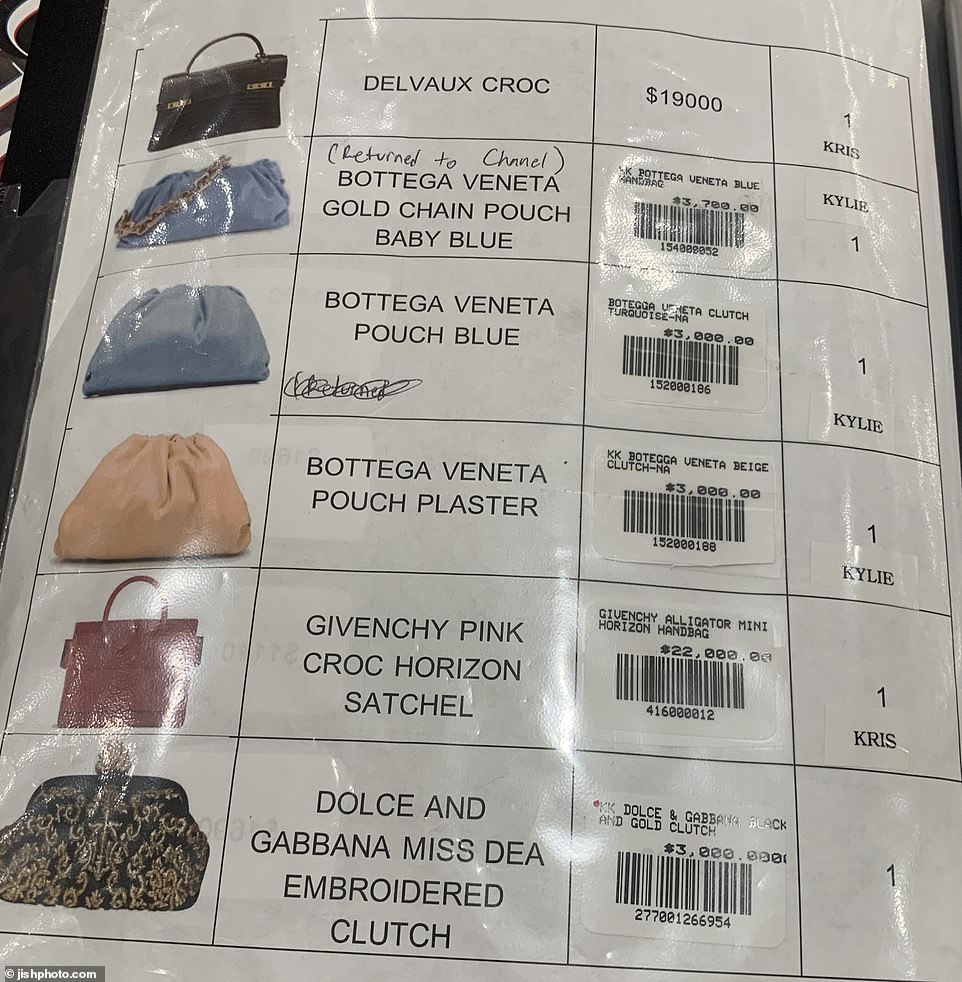 One page of the catalog lists six designer handbags that once belonged to Kris and Kylie, that added up to a haul of over $50,000 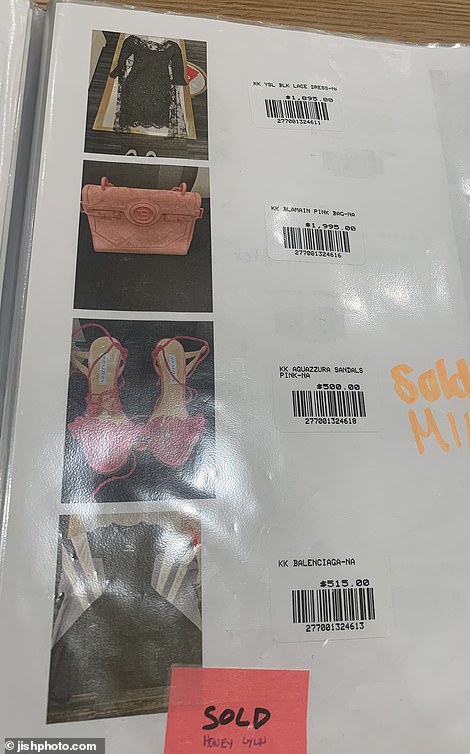 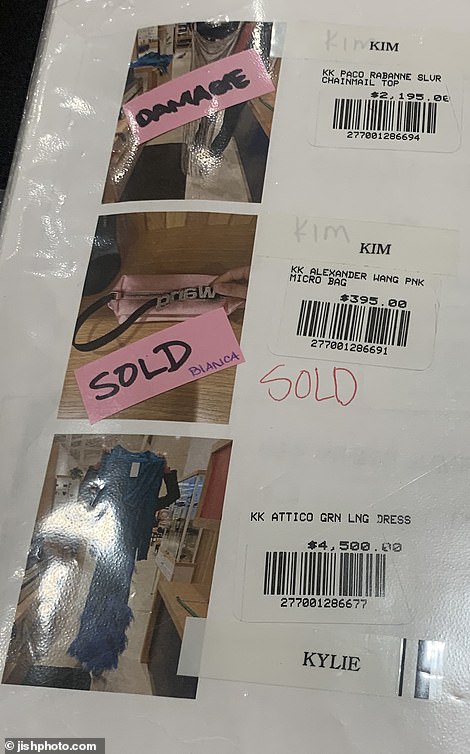 According to a source with knowledge of the resale business, the items are delivered to the store by the Kardashian-Jenner clan’s assistants, meaning staff never actually see the family 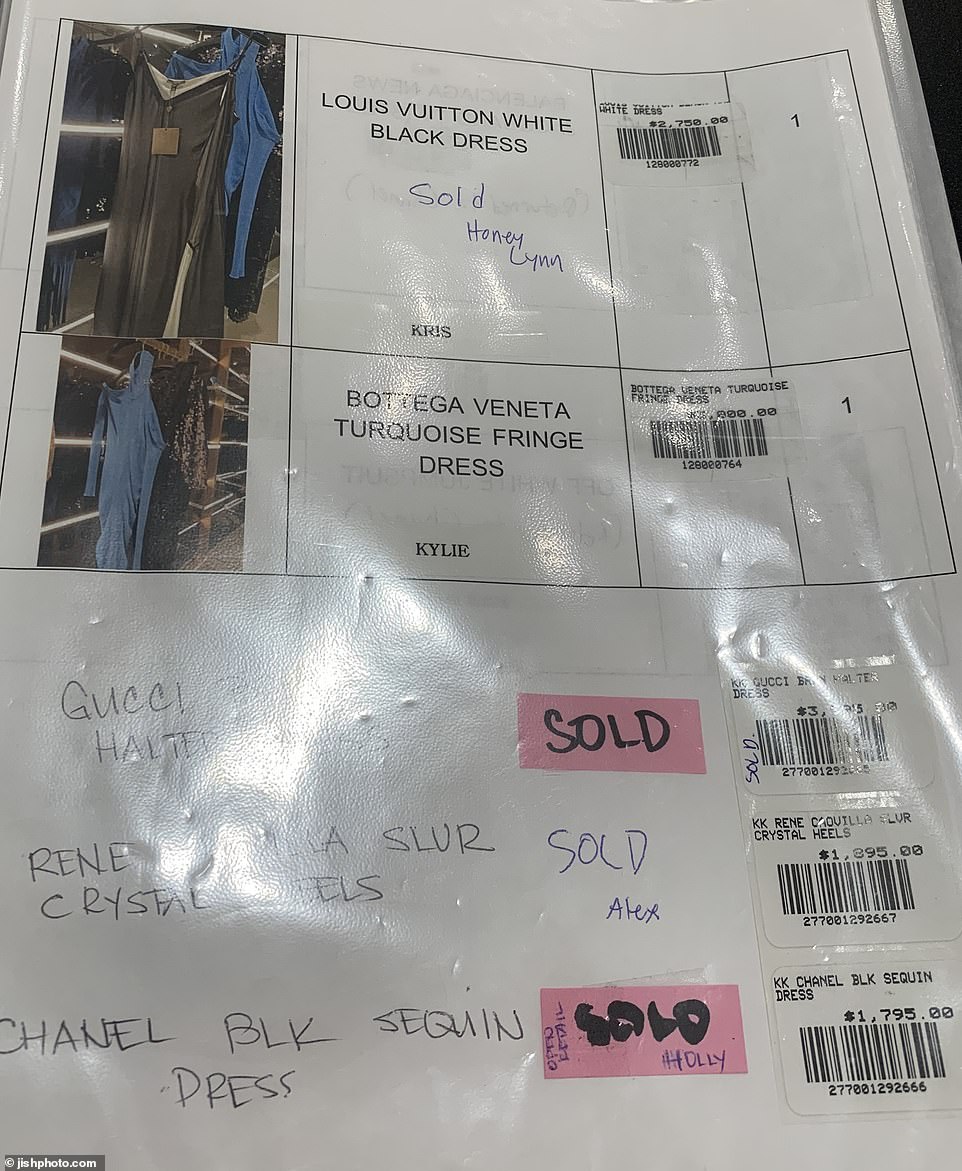 The store catalog includes Kim’s Paco Rabanne gold sequin dress for $1,495 (left) – which is currently marked down from $1,540 to $382 at Saks Fifth Avenue online – and Kylie’s Bottega Veneta blue fringe dress for $3,000 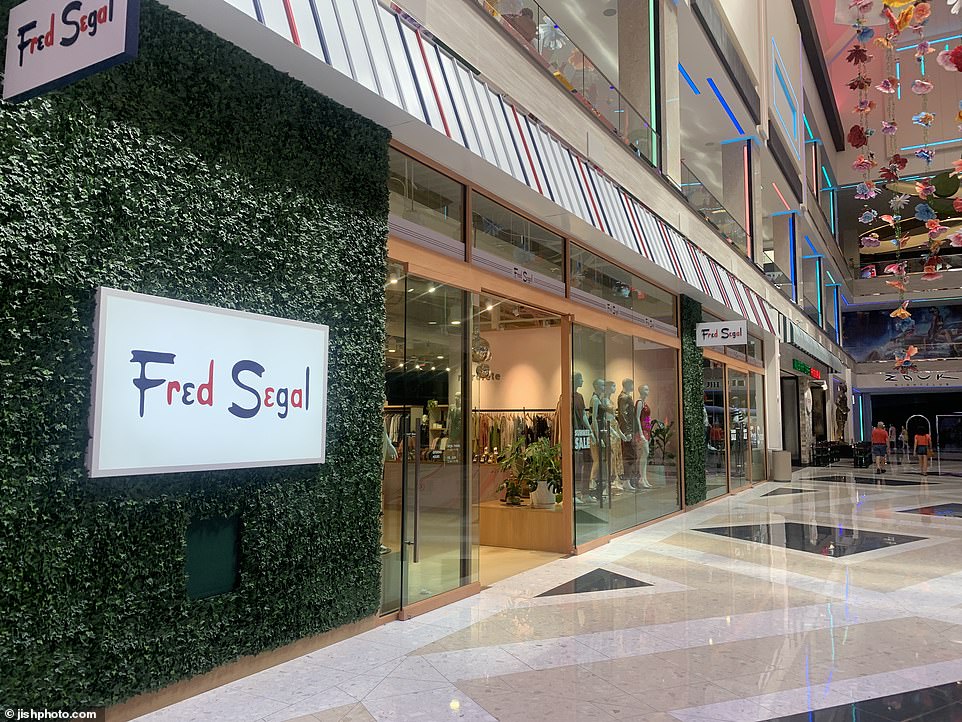 The first retail location for the family’s resale site – located inside Fred Segal – allowing fans to shop luxury clothing, shoes, and accessories items from the sisters’ personal collections in person

While the majority of products are luxury brands, many of the items are missing authentication documents usually kept by buyers of high-end designer goods.

The source said one possible explanation is that the sisters could have received the dress, shoes, or handbag as a gift.

Consignment shoppers do have the option to verify an item’s authenticity elsewhere. Luxury resale giant The Real Real takes between 10 to 15 days to authenticate designer goods dropped off by consigners.

However, the insider revealed the lack of authentication has deterred prospective buyers from splurging.

‘Maybe they were originally gifted to the Kardashians for free by Hermes, Gucci, Balenciaga, but they rarely send those things that can put the buyer at ease that it’s the real deal,’ the source said.

‘That has stopped a lot of sales. But then there’s the person who is just like, “Well, Kylie owned it so that’s good enough”.’

The rich and famous are regularly gifted free swag.

Designer brands know that the Kardashians are photographed every day and it is well worth their investment to have them seen in their fashions.

A request for comment from the Kardashian clan was not immediately returned.