Misery for the ‘squeezed out middle’: British face wage freeze for TWO DECADES 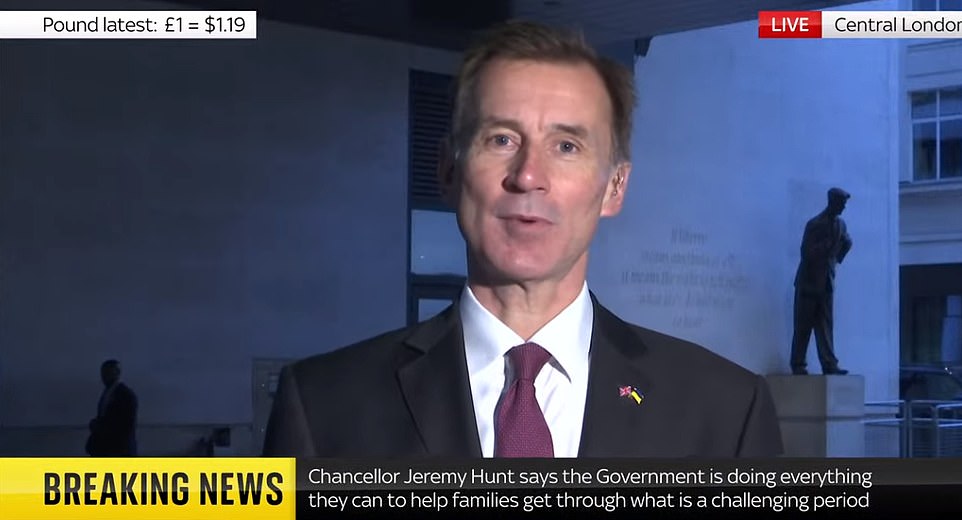 In a series of interviews on the morning after his extraordinary fall statement, the chancellor said he had to be “honest” about the “challenging” situation the country is facing.

But he argued that people vote for the Tory government because they make “tough” decisions. “None of this is easy, but it’s the right thing to do,” he told Sky News.

Mr Hunt yesterday unveiled a desperate package to stabilize public finances, pushing tax receipts above £1 trillion this year and putting the burden on track to become the highest since World War II.

But despite the chancellor saying he shared the pain, the analysis from the Resolution Foundation think tank warned that he is putting pressure on the “squeezed middle.”

It said that in real terms, wages are now not expected to return to levels from 2008 to 2027 – meaning two ‘lost decades’ in which living standards have not improved. If wages had continued to grow at pre-credit crunch rates, they would be £15,000 higher by the end of the period.

The announced increases in personal income tax will, according to the analysis, cause a permanent drop in income of 3.7 percent for the average household.

Under the measures announced yesterday, all workers face paying more tax as a freeze on personal deductions, basic and higher thresholds is extended until 2028, pulling people ‘stealth’ deeper into the system. As a result, 3.2 million people will be taxable for the first time and another 2.6 million will be subject to the higher rate in five years’ time.

Subsidies on utility bills are being cut to save money, with the average household bill rising from £2,500 to £3,000 from April. Mr Hunt argued that the energy crisis was ‘made in Russia’.

Municipalities will be given the freedom to increase the municipal tax by a maximum of 5 percent without the need for a referendum.

In a series of interviews on the morning after his extraordinary fall statement, Jeremy Hunt said he had to be “honest” about the “challenging” situation the country is facing

In addition to the tax burden rising to a post-war record, the OBR said this and next year will see the biggest drop in living standards since registration began in 1956 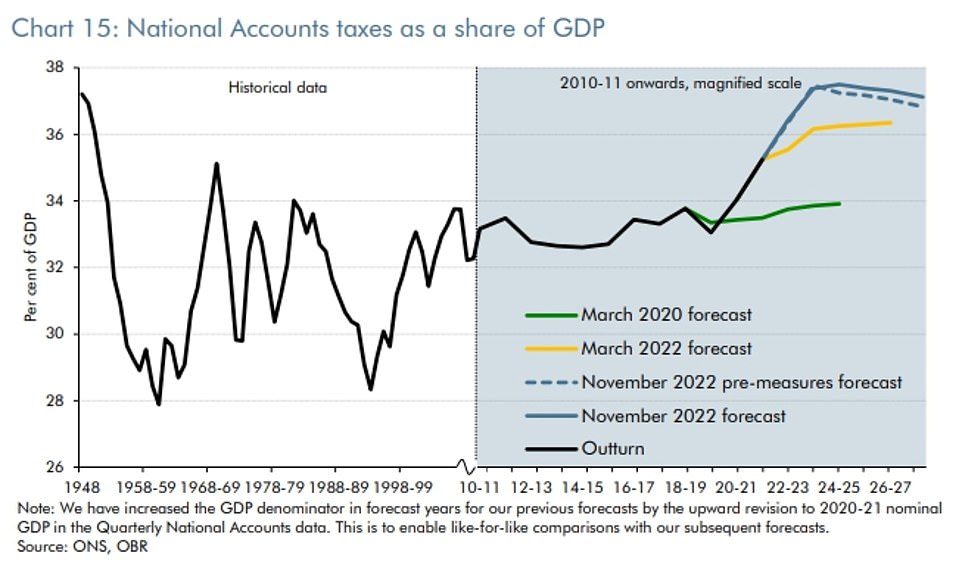 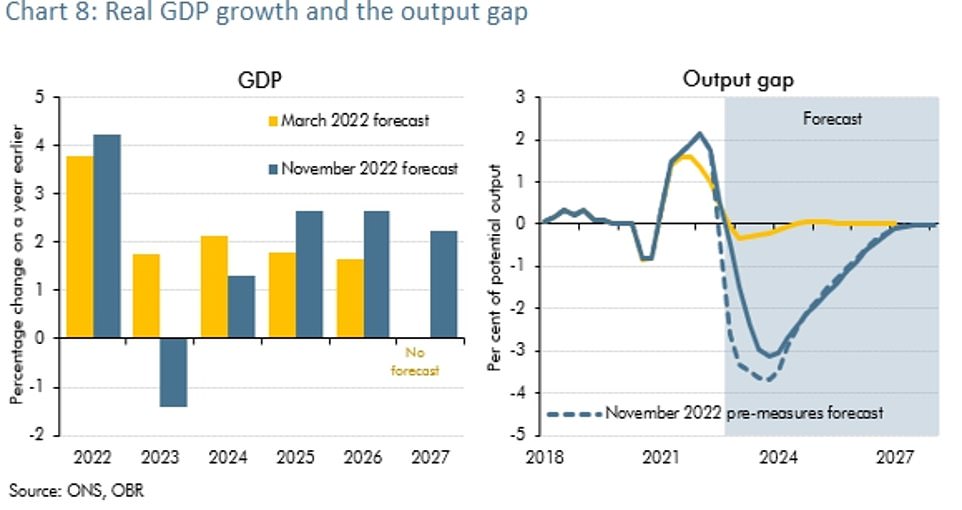 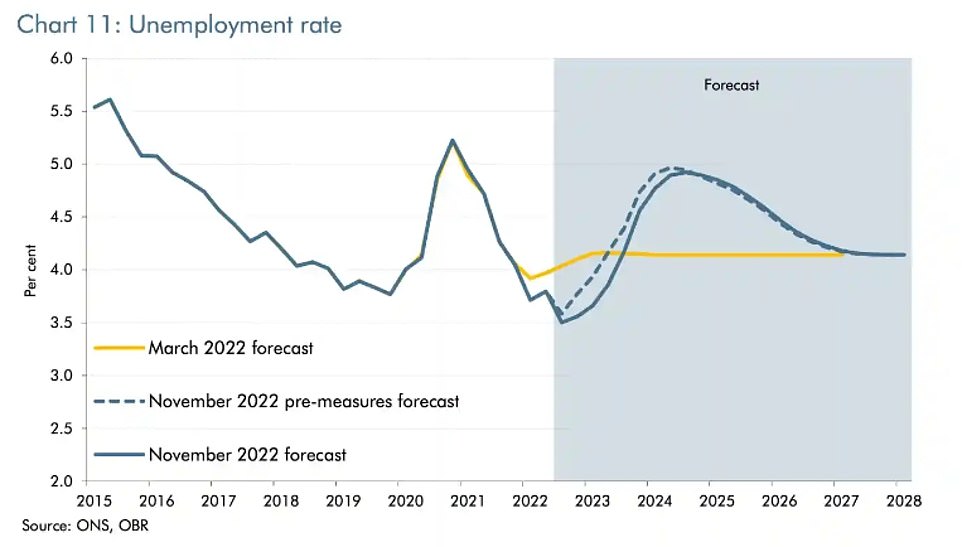 The grim backdrop for the autumn statement was new forecasts from the OBR watchdog, which showed the UK is already in a recession

Mr Hunt said today his fiscal plans will help bring the country back into balance, but admitted it would be “challenging”.

“The next two years will be challenging,” he said.

“But I think people want a government that makes tough decisions, has a plan to reduce inflation, halt those big increases in utility bills and weekly groceries, and at the same time take steps to get through this. difficult period.’

The gloomy backdrop for the fall statement was the OBR watchdog predicting that the economy is already in recession and will shrink by 1.4 percent next year.

This year and next are expected to see the worst declines in living standards since records began in 1956, wiping out eight years of progress and unemployment rising from 1.2 million to 1.7 million.

Tax revenues will top £1 trillion for the first time this year, rather than next year as expected, largely due to the windfall tax.

An analysis of the Treasury’s distribution indicated that by next year all single households earning more than £25,000 will be worse off due to the measures announced today, while families of four were £59,000.

However, he was immediately questioned about his plans when it emerged that the bulk of the £24 billion in tax increases and £30 billion in spending cuts will only be felt after the next election, expected in 2024.

One of the few positive messages from the statement is that state pensions and benefits will be increased in April in line with September’s inflation rate of 10.1 percent.

The windfall tax on energy companies will be increased to 35 per cent and will remain in place until 2028. Together with a 40 per cent tax on profits from older renewable and nuclear electricity generation, that will raise £14bn next year.

Mr Hunt said foreign aid will now not return to 0.7% of national income as planned, but will remain at 0.5% until the ‘fiscal situation allows’ – possibly for the next five years.

In a blow to the real estate market, the Chancellor said the previously announced stamp duty cuts will be reversed in 2025. House prices are expected to fall by 9 percent by the summer of 2024, while mortgage rates will rise.

Another change that will undoubtedly cause a backlash is that electric cars will have to pay road tax for the first time.

While NHS budgets are protected, other departments are facing another grim period of austerity – albeit largely delayed. The OBR assumed that defense spending would remain at 2 percent of GDP from 2024, rather than rising to 3 percent as Defense Secretary Ben Wallace has pushed.

The delicate balance allowed Mr. Hunt to claim that the debt-to-GDP ratio will decline in five years.

He also boasted that total spending will be higher – but the OBR pointed out that the increase from 39.3 percent of GDP in 2019-20 to 43.4 percent in 2027-28 is due only to higher debt rates and social spending and the ‘energy costs’. shock-driven smaller economy’.

In stark contrast to the aftermath of Liz Truss’ mini-budget, markets remained calm as they digested the package. Businesses said it “provides stability,” but there is “more to do” on growth.

Tories are already expressing their anger at the scale of the measures, with Conservative veteran Richard Drax warning that raising taxes for businesses and hard-working people risks ‘choking’ growth and productivity.

Former cabinet minister Esther McVey has threatened to riot and others have raised the alarm that Mr Hunt is ‘throwing out the baby with the bathwater’.

The grim backdrop for the autumn statement was new forecasts from the OBR watchdog, which showed that the UK is already in a recession.

It also made new forecasts for inflation, which has risen to a 41-year high of 11.1 percent.

The OBR said CPI has peaked and will average 9.1 percent this year and 7.4 percent next year.