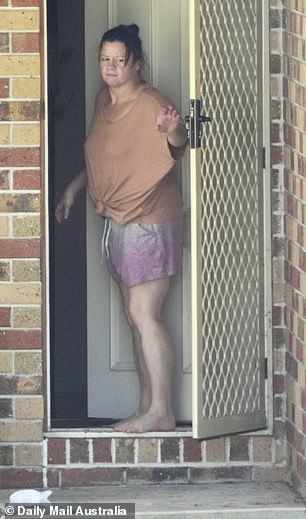 Chantelle Newbery is pictured outside her home in Brisbane’s west

Diving champion Chantelle Newbery’s life is in such turmoil she has been forced to keep her Olympic medals at her lawyer’s office to stop her junkie friends from stealing them.

The fallen champion diver is now living with her two-year-old niece in a granny flat behind a small rental property in Brisbane’s outer western suburbs.

On Thursday, she could be seen in a stained T-shirt putting a dirty nappy in a rubbish bag out the front of the home.

The gold medal-winning Olympian did not want to comment on her troubles, despite Daily Mail Australia being invited inside the home. One of her flat mates then threatened to kill this reporter if I ever returned to the property.

‘Come back here and I’ll f***ing kill you. I’ll f***ing break your neck,’ he said, stomping on my heels as I raced for the door.

The then-squeaky clean Newbery, 45, was the toast of Australia when she won Australia’s first diving gold in 80 years in the 10m platform at Athens in 2004, as well as a bronze. Her ex-husband, Robert, 44, also won two bronze medals at the same games.

The couple divorced after the Olympics, with Robert embarking on a new career as a doctor, while the mother-of-two’s life went into freefall.

She was back in court this month for shoplifting $383-worth of groceries from a local Woolworths.

She told Toowoomba Magistrates Court she filled a wheelie bag with groceries because she was at her sister’s house, where there was ‘no food or money’.

Newbery was sentenced on January 11 to eight months in prison for stealing with a previous conviction, but was released on parole immediately. 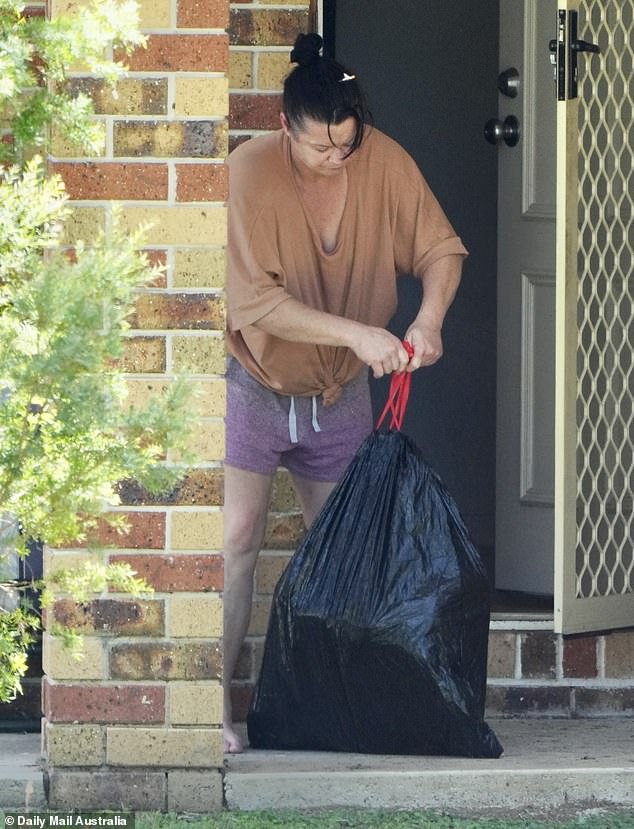 Chantelle Newbery is pictured putting a rubbish bag outside in Brisbane – more than a week after she was sentenced to eight months in prison, and released immediately on parole 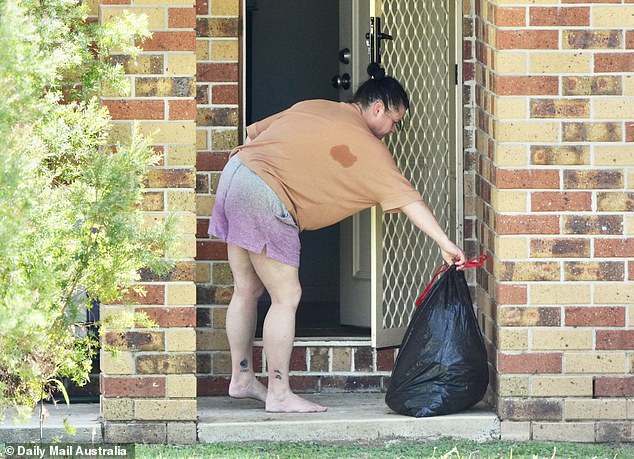 Newbery put a nappy in the rubbish bag, and left it outside the granny flat where she lives with her niece 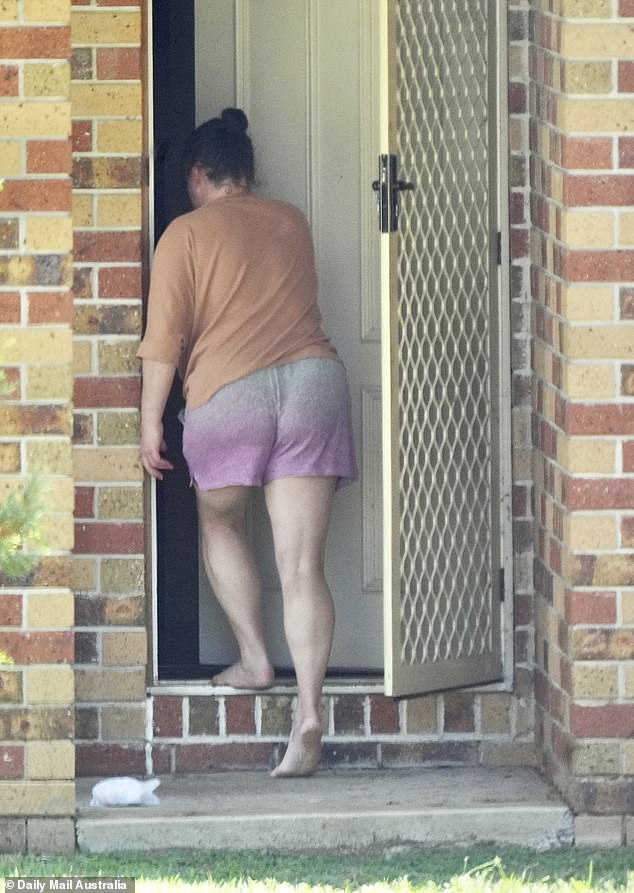 The former Olympian did not want to comment when approached by Daily Mail Australia, while her flatmate threatened to kill the reporter

It’s the latest sad chapter in a devastating fall from grace since Newbery took the top step of the podium at Athens and kissed her gold medal, wearing an olive leaf ‘kotinos’ crown.

– Gold and two silver at the 2006 Commonwealth Games in Melbourne.

Newbery’s lawyer Robert Burns, from Burns Law, said in a reference shown to the court on January 11 that his client used to be ‘Australia golden girl’ and ‘detests’ the life she’s fallen into.

‘Chantelle was once at the pinnacle of celebrity, having achieved a gold medal in the Athens Olympics,’ he said.

‘I hold Chantelle’s medals and awards in my office to keep them safe as she was fearful drug associates would steal them.’

He said Newbery had not developed the means to pull herself out of a drug-addled world ‘that has become a normal existence for her’, but he believed she could be rehabilitated.

‘Chantelle has proven she can be the best in the world.’

Mr Burns told Daily Mail Australia: ‘It became evident that she wasn’t getting the support that she needed – she needed help, and she needed stability. She’s a good person with a heart of gold.

‘She’s a very intelligent and a very well-meaning person and she was in a cycle that she found hard to break free from.’ 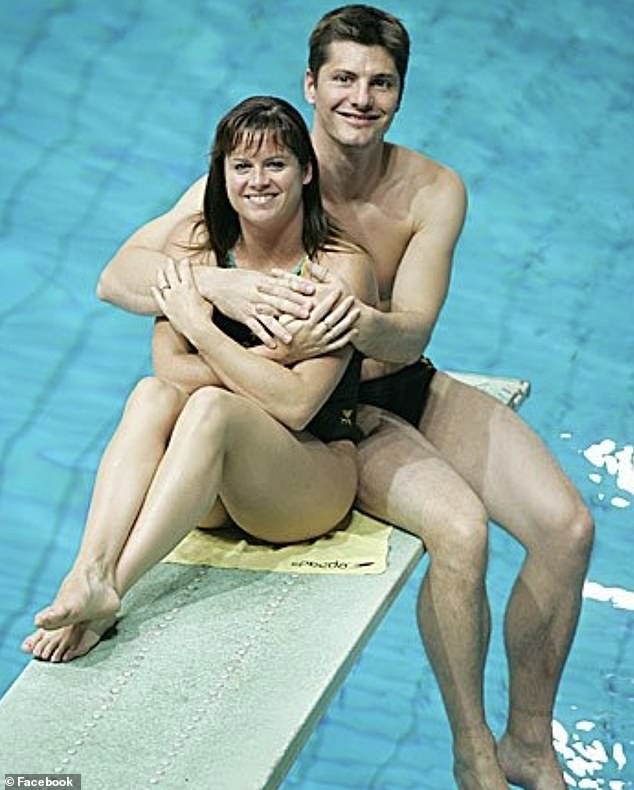 Chantelle Newbery, 45, and her ex-husband Robert, 44, (pictured) were the toast of Australia when the squeaky-clean pin-up couple both won medals for diving at Athens 2004 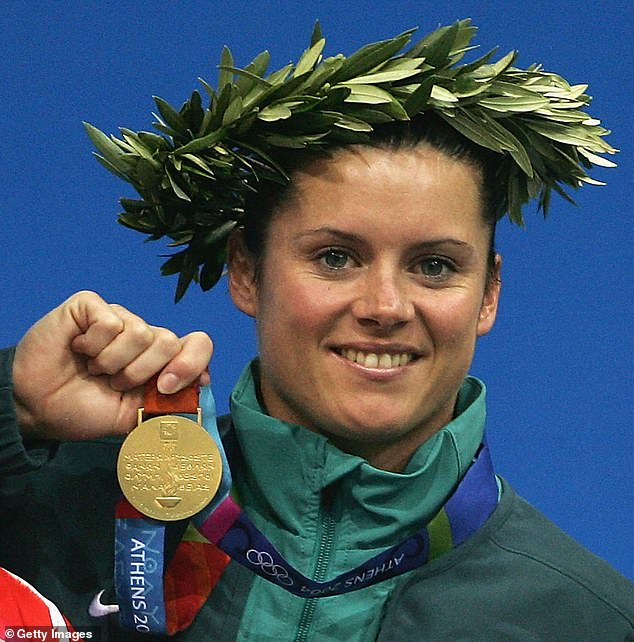 Court documents seen by Daily Mail Australia say Newbery went to discuss her mental health with a GP in December 2021, but she decided they couldn’t help her.

She was eventually cut from an addiction recovery program because she failed to collect suboxone – a prescription drug used to treat opioid addiction.

She has repeatedly been caught shoplifting from stores across Queensland, including one occasion where she tried to hide a stolen ice pipe in her sunglasses case, and has been jailed for theft and drug charges dating back nine years.

In 2014, she appeared in Cleveland Magistrate’s Court for possessing dangerous drugs and failing to properly dispose of a needle and syringe.

She then appeared in Brisbane Magistrate’s Court in 2015 for unauthorised dealing with shop goods – which means she either consumed goods inside a store without paying, or altered a price tag in-store. 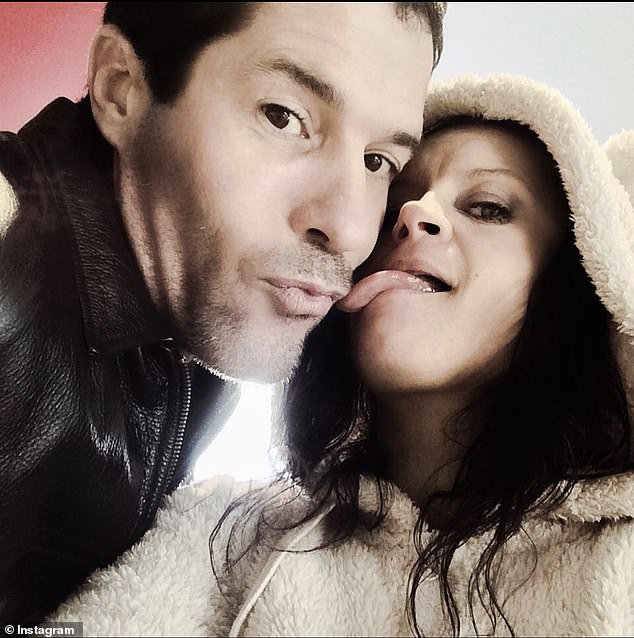 In 2019, Newbery was hit by a double tragedy with the death of her close friend Jason Guise and then two months later her partner Tim Walsh (pictured) 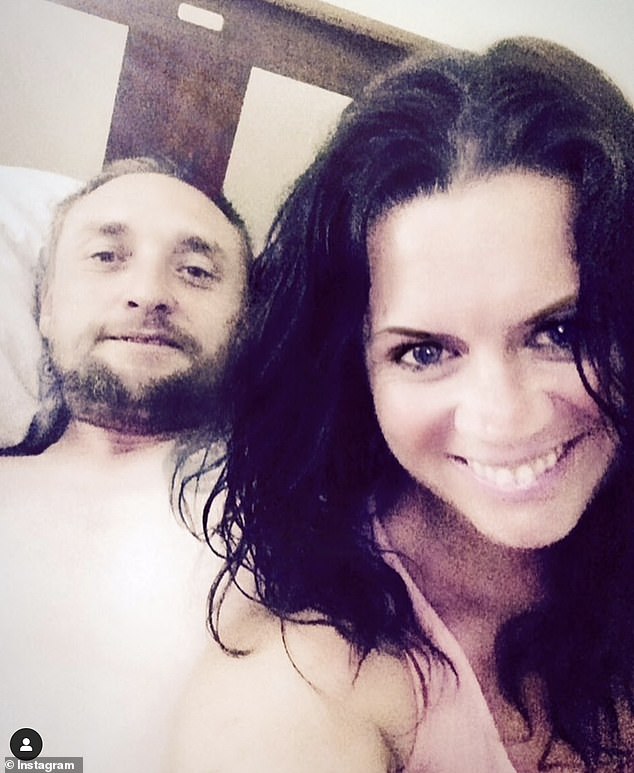 Newbery (pictured) has been jailed for theft and drug charges over the past decade. She has been addicted to methamphetamine 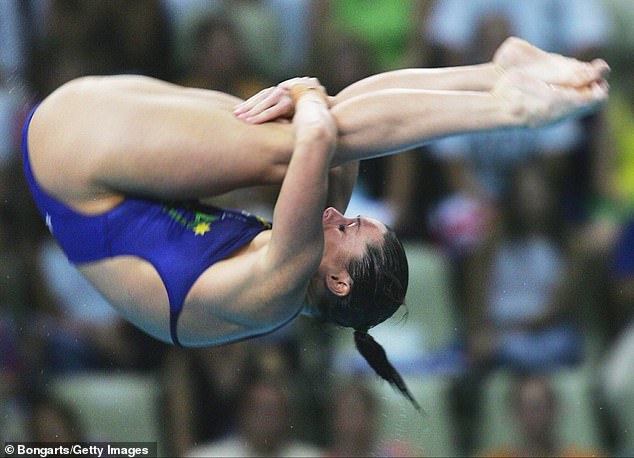 In 2016, she breached a domestic violence order and was fined $600. She also breached bail, committed burglary, and unlawfully used a vehicle.

She was then hit by two personal tragedies in 2019 – the death of her close friend Jason Guise, and then her partner Tim Walsh two months later.

In a rarely seen interview with Bruce McAvaney before Rio de Janeiro’s Olympics in 2016, Newbery spoke about how she was an ambitious teenager who prayed for success – promising God she’d ‘give up everything I had to win an Olympic gold medal.’

‘When I was young, I said that if I win this Olympic gold medal, you can take everything because I don’t need anything any more,’ she said.

‘But you do need the people around you…but still want the medal as well.’

With her marriage crumbling and her sporting career slipping away due to complications during her pregnancy with her youngest son in 2006, she became suicidal and was treated at a psychiatric hospital. 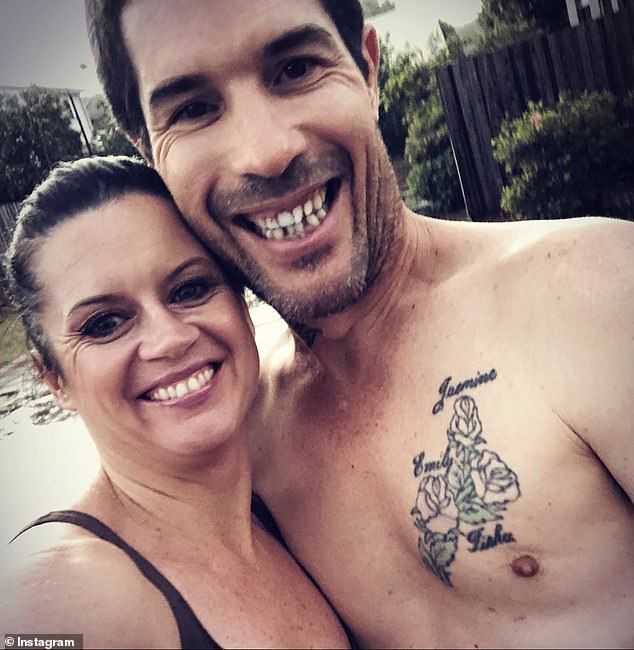 Chantelle Newbery’s lawyer told a court she had become a meth addict and she has been caught with drug paraphernalia, including an ice pipe hidden in her sunglasses case 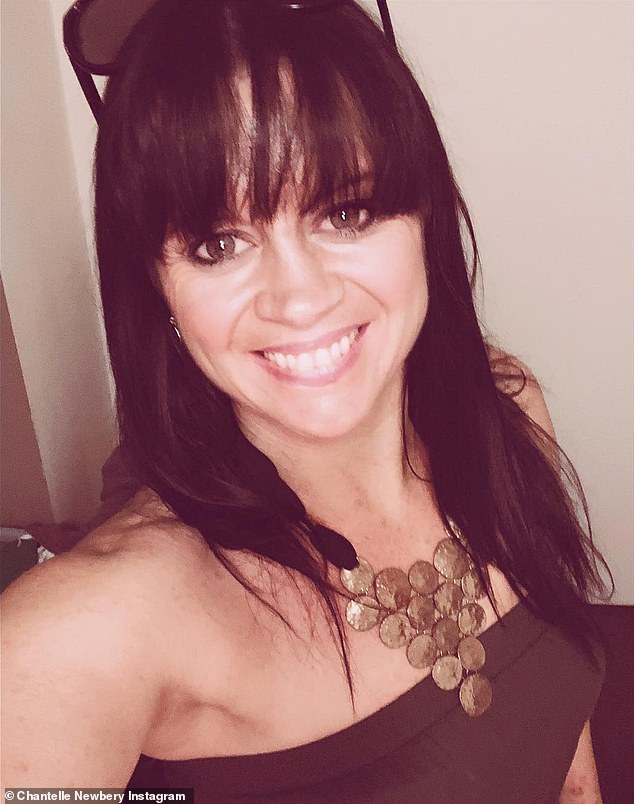 After retiring from diving in 2008, Chantelle Newbery’s fall from grace has been dramatic

‘My marriage ended and my parents had passed away and I just felt like everything was sort of disappearing.

‘And in my head I thought, “Oh, maybe this is the deal that I made…’

Her depression intensified when doctors told her to ‘stay still and lay down’ during her pregnancy – ‘it was horrible,’ she said.

‘Just looking at the TV – Robert was studying and I wasn’t working at that stage, so there was no one around. It wasn’t very nice.’

She added: ‘I’m generally a happy person. I’m not a sad person. I’ve just had things that I haven’t dealt with.’

The last time she competed in the Olympic Games was in Beijing 2008, where she placed 14th.

Newbery previously admitted that winning gold at Athens was the greatest moment in her life, but it was difficult to cope with post-Olympic blues.

‘A lot of athletes struggle after the Olympics,’ Newbery admitted. 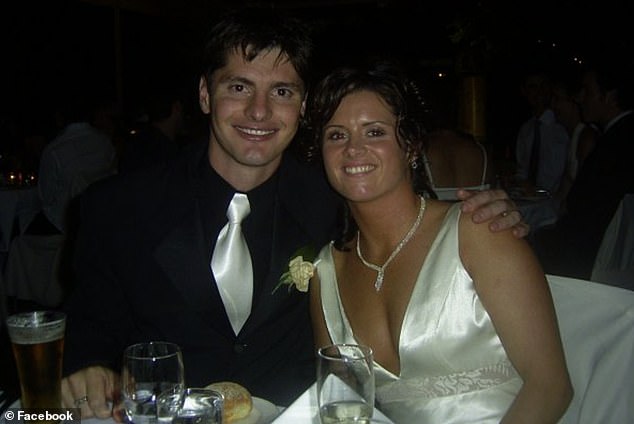 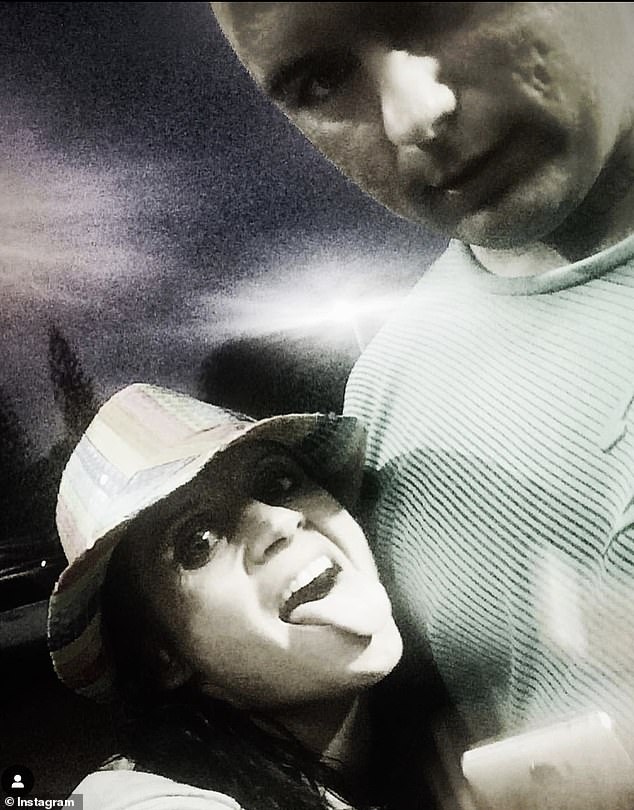 Newbery, a mother of two, has endured plenty of hardship in recent years as she battled drug addiction

‘You’re working your whole life towards a goal and then whether you achieve that goal or you don’t, It comes to an end.

‘It’s a big change in your life and I think we all struggle with it.’

She added: ‘Nothing really matches it for me yet.

‘There’s a lot of things I love doing but there’s not not one thing that I am absolutely obsessed about and love and am so passionate about.

‘Diving is the best sport. I love it. Absolutely. It’s a beautiful sport.’

She started a new relationship with lover Luke Sullivan in 2020 in the wake of the death of Mr Walsh and praised him on social media for trying to help her.

But her Facebook status has now been set back to single.

At her latest court appearance, her lawyer Alysha Jacobsen told the court Newbery had been homeless, but was living at her sister’s home in Toowoomba at the time of the shoplifting offence in July.

Her lawyer told the court she was caring for her 18-month old niece who would be placed in care if Newbery went to prison.

Magistrate Kay Phillipson told her: ‘You really need to turn things around.’

Diver Chantelle Newbery burst onto the international scene as a 20-year-old at the 1998 world titles in Perth, where she won bronze in the 3m springboard. 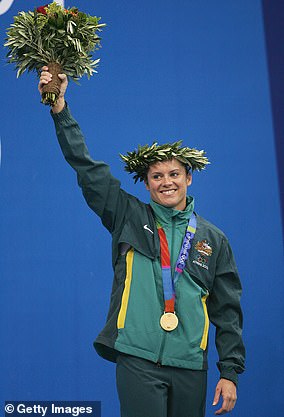 She competed at the Commonwealth Games in Kuala Lumpur later that year, where she won gold in the 1m springboard and silver in the 3m springboard.

Newbery competed at the 2000 Olympics in Sydney where she just missed out on a medal in the synchronised 3m springboard event.

She missed the 2002 Commonwealth Games with the birth of her first son.

In 2004, she became the first Australian diver to win an Olympic medal in 80 years when she won gold in the 10 metre platform at the Olympics in Athens.

In 2005, she was awarded an OAM and and became the 22nd athlete to be honoured in the Australian Institute of Sports Awards, ‘Best of the Best’.

Success continued with a gold and two silvers at the 2006 Commonwealth Games in Melbourne before giving birth to her second son later that year.

Newbery retired from diving after her third Olympics in 2008 in Beijing, where she failed to medal.