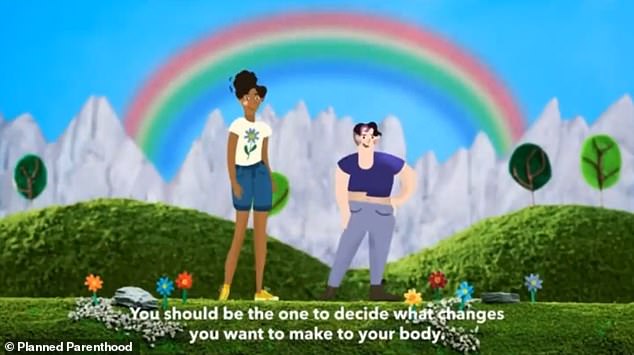 Planned Parenthood is receiving backlash for a cartoon ad that teaches teenagers different ways of delaying puberty, some of which they claim ‘work like a stop sign.’

One of those ways is through the use of puberty blockers, which can halt voice deepening, facial hair growth, and menstrual cycles.

In the video, cartoon figures tell teenagers that puberty looks different for everyone, particularly if they’re trans, intersex or nonbinary, and what they’re experiencing during puberty may be confusing as it may not line up with their gender identity. 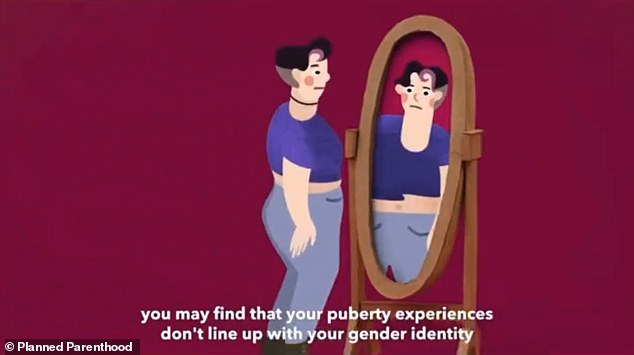 Cartoon figures are used tell transgender teenagers that puberty looks different for everyone, and what they’re experiencing during puberty may be confusing

‘Puberty blocker ad put out by Planned Parenthood, which tells children that they can get puberty blockers to ‘put their puberty on hold,” EITC tweeted earlier this month.

Planned Parenthood claims in the video that puberty blockers – which block hormones testosterone and estrogen in the body – are safe and can allow teenagers more time to ‘figure out what’s right’ for them.

The video encourages kids to talk with a trusted adult, a nurse or a doctor.

‘Puberty blockers are safe and can give you more time to figure out what feels right for you, your body, and your gender identity,’ the organization claims. ‘You don’t have to have all of the answers right now.’

‘Your gender identity is real. You should be the one to decide what changes you want to make to your body,’ the ad continues.

In the video, Planned Parenthood explains through cartoon figures that intersex people might not experience puberty until they turn 14, and could undergo some changes, but not others. They encourage them to take cross-sex hormones or undergo a series of sex-change surgeries. 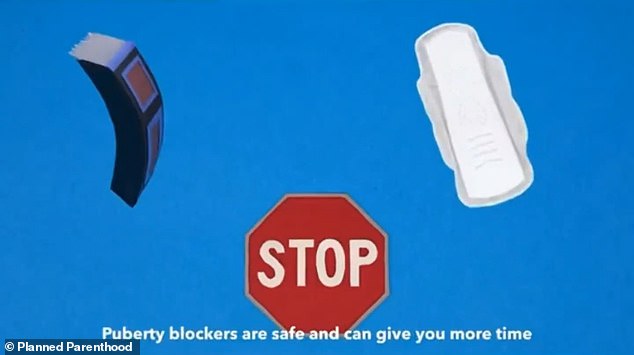 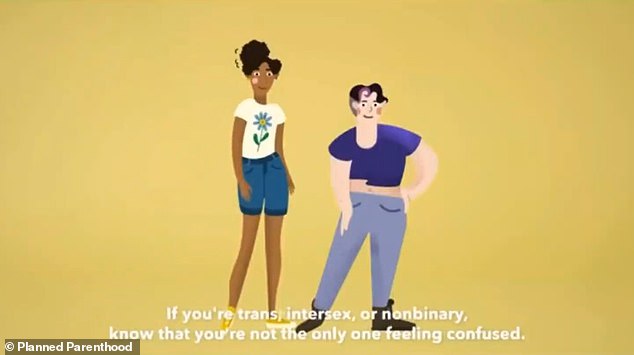 The video tells teenagers that if they are trans, intersex or nonbinary, they’re not the only ones feeling confused and that puberty is different for everyone 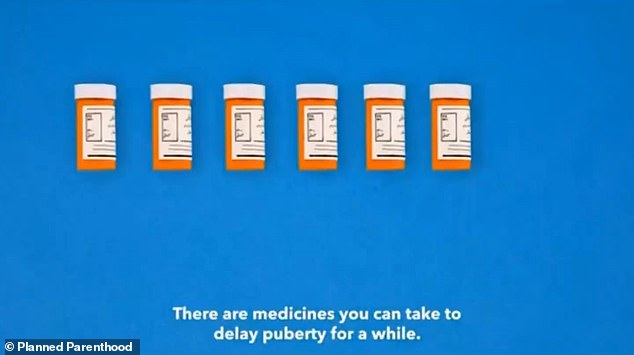 Some transgender, intersex, or nonbinary teenagers may decide to take puberty blockers after talking about it with their parents or guardian and a nurse or doctor, the ad says

When speaking to those who are transgender or nonbinary, the organization says their experience with puberty may be stressful and confusing as it may not align with their preferred gender identity.

The post of the resurfaced video was followed by several angry tweets that criticized the video and its message.

One Twitter user exclaimed: ‘Why is Planned Parenthood now giving medical advice to children? This should be illegal.’

Another pointed out: ‘Besides all the lies, and inaccuracies, “Talk to your trusted adult or doctor” Notice how they don’t include the parent.’

Someone else tweeted: ‘Planned Parenthood just did the math on the money they can get here. Although their abortions will take a hit if they just neuter people.’

The resurfaced video was followed by several angry tweets that criticized the video and its message, like this one that said Planned Parenthood giving medical advice should be illegal

Another Twitter pointed out that the organization encouraged the kids to talk to doctors or a trusted adult, but nothing about a ‘parent’

WHAT ARE PUBERTY BLOCKERS?

Some transgender, intersex, or nonbinary teenagers may decide to take puberty blockers after talking about it with their parents or guardian and a nurse or doctor.

Puberty blockers are medicines that prevent puberty from happening.

They work by blocking the hormones — testosterone and estrogen — that lead to puberty-related changes in your body.

This stops things like periods and breast growth, or voice-deepening and facial hair growth.

There are two kinds of puberty blockers:

Anti-androgens are another kind of medicine transgender girls and nonbinary folks who were assigned male at birth can take to lower the levels of testosterone in their bodies.

Earlier this month, Oklahoma Governor Kevin Stitt has signed a bill that effectively bans gender- reassignment drugs from being prescribed to minors at the state’s main children’s hospital.

The Republican is withholding Covid relief funds from Oklahoma Children’s Hospital at OU Health until it stops providing puberty blockers and hormone therapy to under-18s.

The state allocated $108 million to the University of Oklahoma-linked health system as part of the federal American Rescue Plan Act passed in 2021 to help struggling businesses and hospitals.

Gov. Stitt said: ‘By signing this bill today we are taking the first step to protect children from permanent gender transition surgeries and therapies.

‘It is wildly inappropriate for taxpayer dollars to be used for condoning, promoting, or performing these types of controversial procedures on healthy children.’

Oklahoma Children’s Hospital currently offers life-altering drugs to teenagers under 18 with parental approval. It is thought that around 100 minors are currently receiving treatment.

Stitt also called for the Republican-controlled state Legislature to ban some of those gender-affirming treatments statewide when it returns in February.

He said in a statement that he wanted a prohibition on ‘all irreversible gender transition surgeries and hormone therapies’ on minors.

It comes after Alabama tried to make it a felony for doctors to prescribe puberty blockers to minors with a punishment of up to 10 years in prison.

But that move was blocked by a federal judge just a few days after it took effect in April.

A federal court has also blocked the Arkansas law from going into effect.

Only two states, Arizona and Tennessee, have some iteration of a trans healthcare ban on the books that remains in effect. 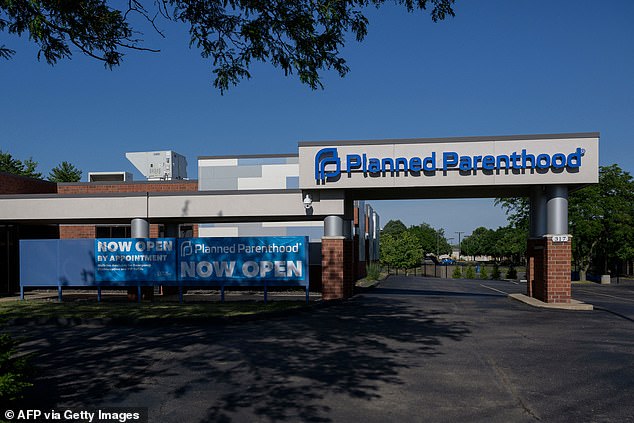 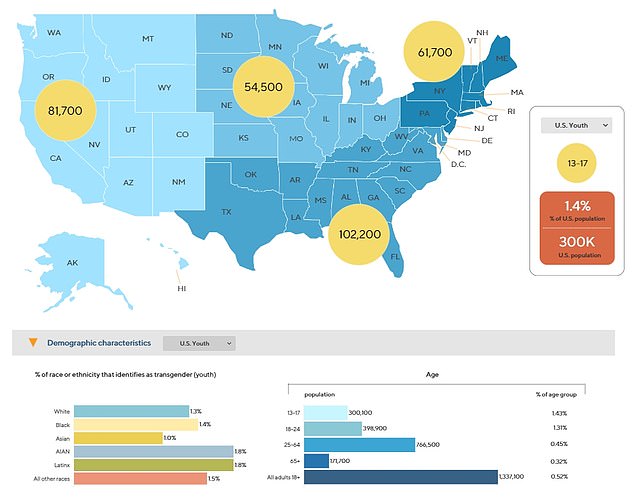 There are estimated to be 300,000 trans Americans aged 13 to 17, a number that has risen several fold in the last two decades

The legislation did not ban the use of hormone therapy or puberty blockers, though.

Tennessee has banned doctors from providing the drugs to pre-pubescent minors but older teens who have undergone the proper rounds of therapy and consultation with their doctors can still access them.

Abbott compelled the state’s Department of Family and Protective Services to report all instances of ‘direct contact with children who may be subject to such abuse,’ which would then launch an investigation into the trans child’s parents.

Since January 2022, 15 states have introduced a total of 25 bills meant to chip away at trans healthcare services. 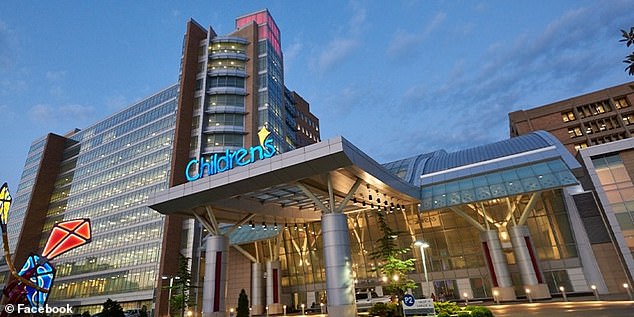 Oklahoma Children’s Hospital currently offers the life-altering drugs to teenagers under 18 with their parents’ approval. It is thought that around 100 minors are currently receiving treatment 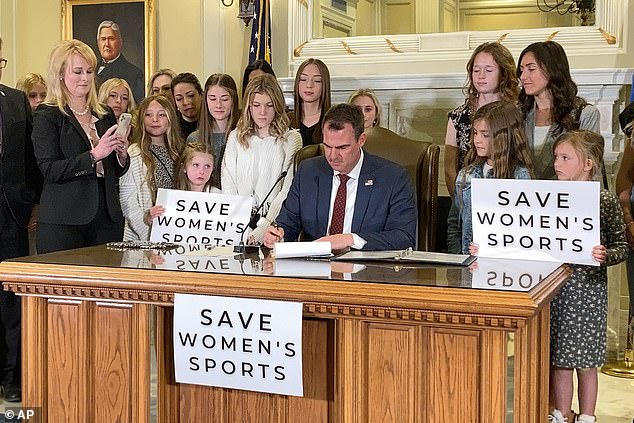 Puberty blockers are medicines that trans children take to prevent the body from making the hormones that produce the physical changes of puberty. Delaying the onset of puberty gives a trans child more time to explore their identity.

They may also prevent the need for future surgery, such as removal of the breasts.

Teens may also start hormone therapy to deepen their voice or make their features either more masculine or more feminine. They help develop sex characteristics such as growing facial hair, changing body shape, and growing breasts.

Most of those hormonal changes are irreversible.

The hospital told DailyMail.com that it has ‘ceased hormone-related prescription therapies and surgical procedures for gender-affirming services on patients under the age of 18.’

It is not clear what will happen to minors who are currently receiving the prescription hormone therapies.

This is not the first instance of Stitt and the majority-Republican legislature targeting trans youth.

In March, he signed the the Save Women’s Sports Act, which bans public school students of all ages as well as college athletes from competing on the sports teams of their gender identity if that differs from their sex assigned at birth.

Gov Stitt also signed a bill in May that bans public school students from using the bathroom that best reflects their gender identity if it does not match with the gender listed on their birth certificate.

The bill’s signing has been met with pushback from social justice and physicians groups.

Tamya Cox-Touré, Executive Director of the ACLU of Oklahoma, said, ‘Today, Oklahoma politicians took the next step in joining their colleagues in Alabama, Arkansas, and Texas, by attacking lifesaving, best-practice medical care for Oklahoma’s transgender youth.’

‘Medical experts agree: Gender-affirming care is medically necessary care. And today’s actions, along with the displays on the House and Senate floors, show a fundamental ignorance about medical treatment for transgender youth,’ she added.

‘Unfortunately, instead of supporting the mental health of Oklahoma’s children, lawmakers are once again inserting themselves into private health care,’ the organization said.

Stitt also called on the Republican-led legislature to ban certain gender-affirming services outright when it returns to session in February.

He said, ‘We cannot turn a blind eye to what’s happening all across our nation, and as governor I will not allow life-altering transition surgeries on minor children in the state of Oklahoma.’

WHAT IS GENDER DYSPHORIA?

Gender dysphoria is a term that describes a sense of unease that a person may have because of a mismatch between their biological sex and their gender identity.

This sense of unease or dissatisfaction may be so intense it can lead to depression and anxiety and have a harmful impact on daily life.

The exact cause is unclear.

Gender development is complex and there are still things that are not known or fully understood.

People with gender dysphoria may have changed their appearance, their behavior or their interests.

They may also show signs of discomfort or distress, including:

After being referred to a specialist clinic by a GP, patients with gender dysphoria are given therapy and counselling.

Adult patients can then be offered hormone therapies – usually testosterone for those wanting to be masculine or oestrogen for those hoping to be more feminine.

Over-18s may then be referred for surgery.

Fat and buzz! Doja Cat, Amelia Hamlin and more who shaved their eyebrows