Police video: Man arrested in Sydney during the Covid pandemic for sitting on a park bench without a mask 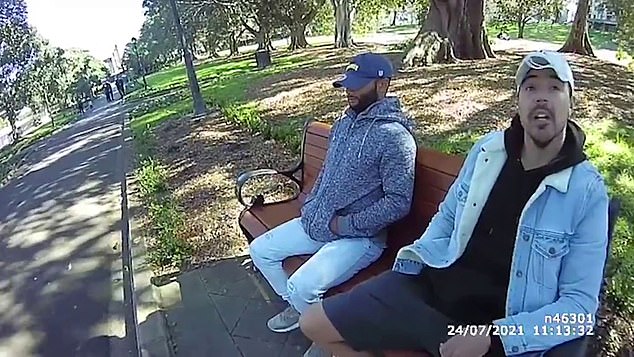 A recently released video from police CCTV has exposed the extremes of Australia’s lockdown laws during the Covid pandemic.

A Rally 4 Freedom protest had been held in Sydney earlier that day as the virus spread rapidly and the Harbor City was under strict stay-at-home orders and mask mandates.

What started as a general enquiry, ended with Paz on the floor screaming “I can’t breathe,” surrounded by police officers.

On Tuesday, Paz was sentenced in Sydney Downing Center local court to an 18-month community correction (CCO) order for assaulting an officer and a 12-month CCO for resisting an officer.

He was also fined $2,000 for not wearing a face mask and failing to comply with a Covid guideline.

Edwin Paz (pictured right) was arrested on July 24, 2021 during the height of the Covid-19 pandemic

The footage played in court begins with one of the officers telling Paz that their conversation was “audio and video recorded” and that he was allowed to do so in a public place.

Paz refused to cooperate with the police, telling them, “I can’t hear you.”

The officer tells Paz to “get up and leave or I’ll arrest you.”

“Are you trying to intimidate me?” Paz asks. “I do not agree to talk to you, I have not made a contract with you, so do not speak to me again.”

Paz then asked the officer what crime had been committed.

The officer replied, “If you’re not within your local LGA (local government area) or not exercising, you’re not in a public place with a reasonable excuse.”

It later transpired that Paz, who is from Smithfield in western Sydney, was out of LGA. 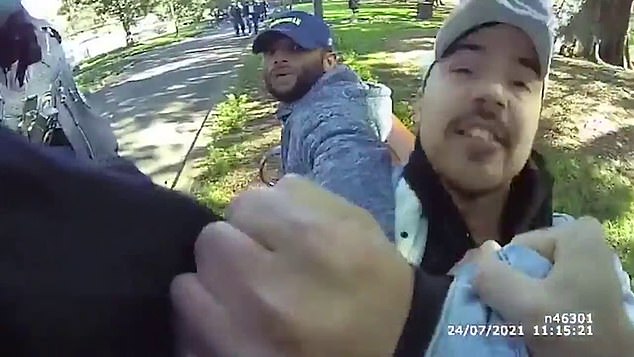 The officer told him that he was arresting him and that Paz also committed an offense by not wearing a face mask.

Paz said he didn’t have to wear a mask, but didn’t want to present an exemption, which was another reason for being arrested.

The other officer then spoke up and told Paz to get up so he could be handcuffed, while the first officer said they didn’t want to use force.

But they did resort to violence when Paz continued to refuse to cooperate.

When the police arrested him, you heard him say ‘Don’t you dare f****** touch me’ and he slapped one of the officers. 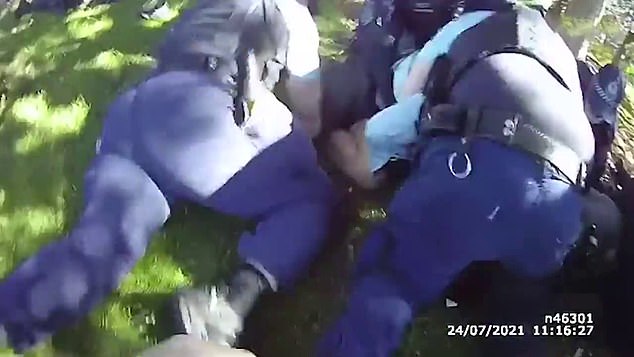 The scuffle continued for another two minutes as more police officers arrived to help their colleagues.

After he was finally handcuffed, one of the officers said, “We’re in control here,” while Paz can be heard saying, “I can’t breathe.”

He was then told that he had also been arrested for police assault.

Paz is heard calling the officers “f****** criminal c***s” after being handcuffed.

‘Wizard of Oz’ Hourglass, Chris Evans’ ‘Avengers: Endgame’ Shield are up for auction