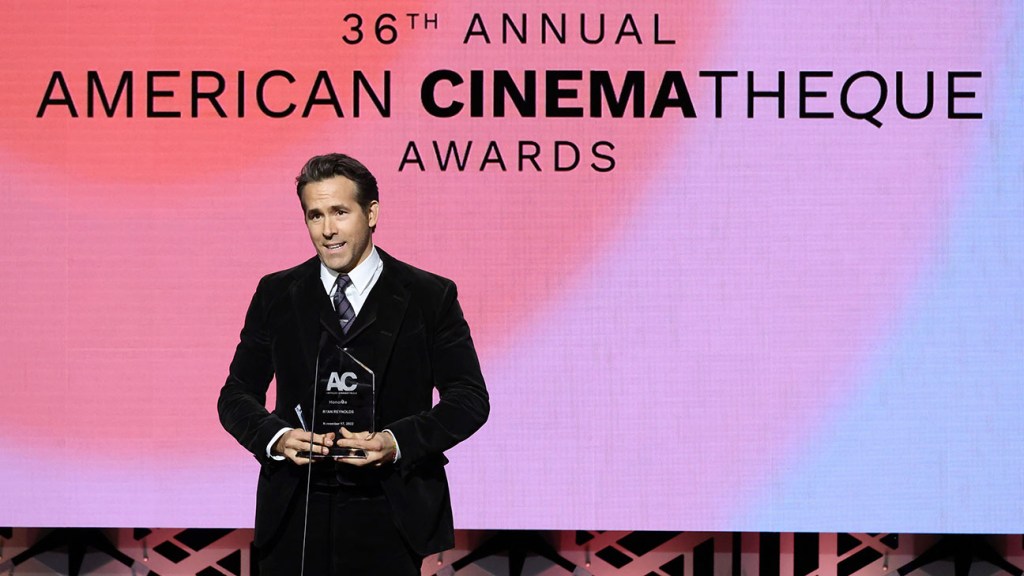 “Anyone who knows me knows how much I love an evening devoted entirely to me,” joked Ryan Reynolds when accepting his American Cinematheque Award in Los Angeles on Thursday night, and like it or not, that’s exactly what he got. The actor was the 36th recipient of the prestigious honor and was celebrated with an evening highlighting his success in acting, producing and his many entrepreneurial ventures by a selection of friends and colleagues, including Will Ferrell, Hugh Jackman, Octavia Spencer , Helen Mirren, Salma Hayek, Shawn Levy and wife Blake Lively.

While the program showcased the many facets of Reynolds’ career through segments titled “The Comedian,” “The Sexy Man,” “The Serious Man,” and “The Smart Ass” — and even featured ballroom-wide vocals of Canada’s national anthem (as Reynolds is the first Canadian to win the award) — Lively’s late night speech turned out to be the breakout.

With the couple’s two eldest daughters present and currently pregnant with their fourth child, Lively noted that the star has always had something in him that has lured him home, from when he first moved to LA to pursue acting. and would drive to Canada. every weekend.

“Now I’m his home, and his girls are his home, and like that 19-year-old boy, he’s running home, be it from around the world or a meeting across the street; he is determined to go home,” Lively told the crowd in the Beverly Hilton ballroom. “If he comes home from the set that’s not in his wardrobe, we’d be very concerned — drenched in mud, fake blood, real blood, prosthetic scars, superhero suits, tap shoes, or clown makeup, Dad always comes home.”

Reynolds’ frequent collaborator Levy – who works with him again for Deadpool3 and teased that if the third doesn’t live up to the previous two, it will be the fault of Jackman, who joins the project as Wolverine — also highlighted Lively in his speech as the superpower of Reynolds and his whole world, noting: “One of the best things is that I don’t think a day has gone by in the four years we’ve been working together that he doesn’t acknowledge that and express his gratitude for it.”

Levy, who was the last speaker of the evening, also jokingly complained that no one had told him he was going to be “a hell of a 17th, and everyone that comes before you are real professional actors and comedians and leaders of nations. They’re going to loot every goddamn idea you had, so I don’t have anything original.” But Levy summed up Reynolds as “more than a great artist, he’s a great man.”

Ferrell, who stars with Reynolds in their new Apple TV+ musical Wittywas Reynolds’ first host and noted that previous recipients of the American Cinematheque Award included “Steven Spielberg, Ron Howard, Martin Scorsese, Jodie Foster and Sean Connery, to name a few. And tonight you chose Mr. Ryan Reynolds. What were you thinking? What happened? Who fell through? He’s not even American, he’s Canadian!”

However, he also had some kind words: “Ryan Rodney Reynolds, or Ry-Rod, as you are affectionately known by your fans, you are an incredibly talented actor, filmmaker, businessman, but more importantly, you are just a great guy and I’m lucky enough to call you a friend.

Hayek, Mirren, Jackman, Jeff Bridges and Canadian Prime Minister Justin Trudeau submitted video messages, and Spencer, Nathan Fillion, Mary Steenburgen and Rob McElhenney served as personal presenters. McElhenney bought Welsh football club Wrexham AFC with Reynolds two years ago, saying: ‘Chances are we’ll be in this thing together for the rest of our lives. And I can honestly say there is no one on earth I would rather do this with than Ryan.”

When Reynolds finally took the stage to receive his award, he admitted: “I’ve never really taken myself seriously, as many of you know, and it creates a pretty confusing paradox when I’m celebrated with a very serious awards ceremony with prestigious company like this.” He recalled that Bridges once gestured to a roomful of actors and producers and proclaimed, “This is our tribe, man,” something he had nothing to do with at the time.

“While I’ve been privileged to play in a variety of fields and sandboxes, I’m aware that I’m best known as a movie actor, and that humbles me because movies bring people together in both figurative and literal ways,” says Reynolds. said. “That feeling of togetherness, more than anything, is what I desire, what I desire to create,” adding that so much of what he does is for his daughters.

“Most importantly, I spend my days with my favorite co-worker of all, my wife Blake. You are the greatest ghostwriter in Hollywood history, you literally wrote me to this moment,” he continued, before finishing, “Here I stand before you with this beautiful and beautiful trophy, imbued with all this privilege and happiness and gratitude . , and despite what I thought of Jeff Bridges’ comment years ago, I’m beginning to suspect I may be part of a community.

Jason Blum and his Blumhouse Productions were also honored as part of the evening, receiving Hill Valley’s Power of Cinema Award; Universal Pictures chairman Donna Langley teasingly introduced him to Blum, “I just have to warn you that your fellow honoree tonight, Ryan, is very funny and makes very funny movies, so he has funny people introducing him.” You make scary movies, so you have a scary person impersonating you.

“He’s crazy, he’s bold, he’s fearless, he’s brave, and I must say, Jason, your cooperation and friendship have been invaluable,” Langley said. “I’m just so proud that you’ve chosen to make Universal your home for over a decade.”

As he took the stage, Blum commented, “It’s funny picking up an award here because everyone in Hollywood says we don’t do it for the awards, which we know isn’t true, but to the horror of it’s actually true because the prizes for horror are rare, so this is very, very cool.

“At Blumhouse we’ve been kind of the outsider for a long time – we’re not allowed to think of ourselves that way anymore I guess, especially here tonight it feels crazy to say, but I still feel that way, which I’m actually happy about – working in a genre we love, featuring some of the most creative filmmakers in our industry,” he continued, dedicating the award to all the filmmakers his company has worked with — including James Wan, who Blum is in talks to release their two merge horror production companies. “I’m very, very excited about what could come when hopefully we all work together,” he said of that collaboration, while also thanking “crazy horror fans. There are millions upon millions of misfits and outsiders who have come to see our Blumhouse movies in the come to see the cinema and have a shared experience of being scared together.”

Analysis | FTX users cannot count on help from the IRS