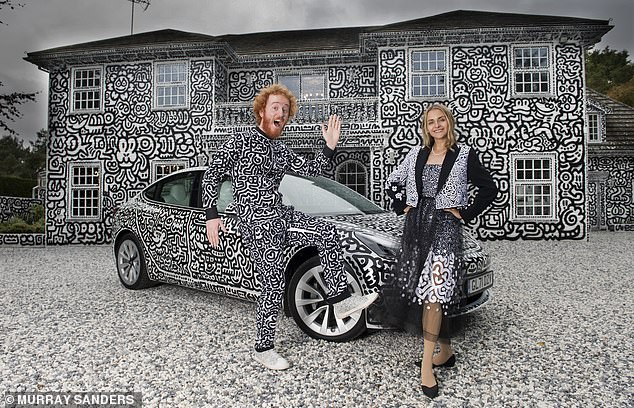 Fuelled by the exuberance of youth, many of us dare to think big and bold. Some of us dream of being film stars or musicians. Others might fantasise about saving lives, the polar ice cap or a rare species in Africa.

Sam Cox’s teenage ambition was rather more niche. Because, from the age of 15, he just knew that one day he had to become a famous doodle artist, buy a big white mansion and doodle all over it. Inside and outside, walls, ceilings, floors, doors and all.

‘It was my lifelong wish. Everything I wanted. Everything was done with the aim of fulfilling this dream,’ he says.

Happily, he is a bit more focused than most of us and so, hey presto, 13 years later Sam (aka Mr Doodle, with a social media following of well over two million), his beautiful Ukrainian wife, Alena, 32, and I are all sitting on doodled sofas in his doodled sitting room in his grand doodle mansion, set in three acres of sweeping lawns on a leafy lane in Tenterden, Kent.

Everything is doodled black and white with cartoons, squiggles and patterns. The skirting boards, the cornicing, the table, the TV stand, the wood burner — even the windows and patio doors are daubed with black acrylic paint.

Hang on, the windows?

From the age of 15, Sam Cox (pictured with his wife Alena) knew that one day he had to become a famous doodle artist, buy a big white mansion and doodle all over it 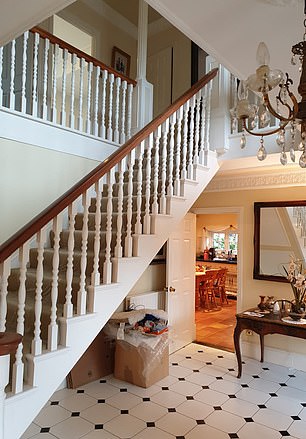 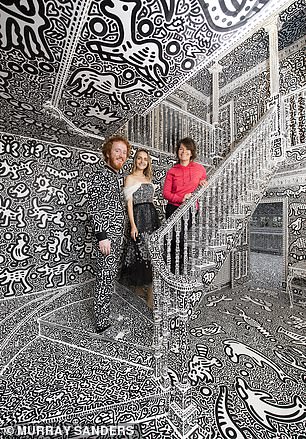 ‘I thought it would be good to immerse myself totally in the doodles,’ says Sam. ‘I wanted to go for the maximum effect and I am so happy with the result. I tried to be very thorough.’

He’s not kidding; you have to peer past the window doodles to see the doodled garage and doodled garden walls. Even the inside of the loo seat has been lovingly adorned. Along with the bath, the microwave, the oven extractor hood and some fake toast in the kitchen, for effect.

The entire project took Sam two years of up to 16-hour days until, last week, he was finally ready to reveal the art installation that he and Alena will now live in. ‘I was a bit nervous about it but so proud of what I’ve created,’ he says. ‘But even if only one person in the world liked it, is moved by it, I’d be happy.’

It has certainly caused a stir. TV networks from all around the world are clamouring for a chat with Mr Doodle. Social media has gone bananas. And even fashion brands are limbering up for collaborations.

Some people — including one next-door neighbour, who is screened from most of the monochrome glory by a very thick yew hedge — apparently love it. Sue, who lives in a bungalow across the road, is a little less enthusiastic: ‘It’s not to my taste — it’s a bit psychedelic for me. Though, to be fair, I didn’t even notice it until a friend told me.’

The two people who might be the least keen are the couple in their 70s who sold the house to Sam back in 2019 for £1.35 million, when his career was first taking off. 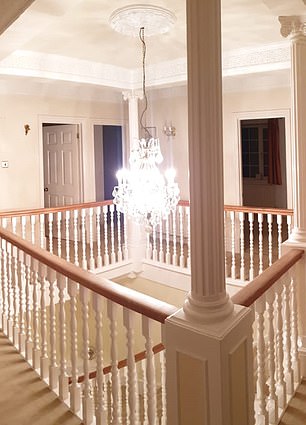 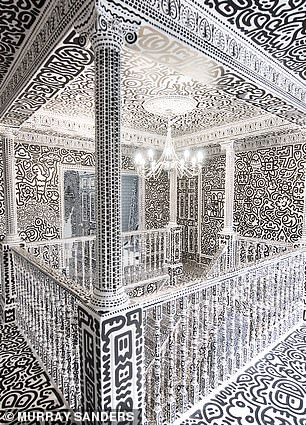 Everything is doodled black and white with cartoons, squiggles and patterns. The skirting boards, the cornicing, the table, the TV stand, the wood burner — even the windows and patio doors are daubed with black acrylic paint 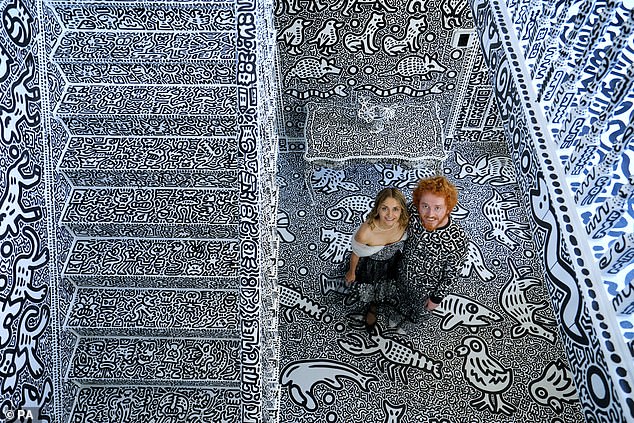 The entire project took Sam two years of up to 16-hour days until, last week, he was finally ready to reveal the art installation that he and his beautiful Ukrainian wife, Alena (pictured), 32, will now live in

‘They knew I was Mr Doodle and they told me not to doodle on it,’ he says. ‘I told them I wouldn’t because I loved it so much.’

And the minute they moved out? ‘We started ripping it all out,’ he says. ‘We haven’t heard from them yet, but they only moved 15 minutes down the road. It’s only a matter of time.’

So out went the rugs and bookshelves, the beige carpets and gold wallpaper — and in came the white paint.

‘It was a very traditional English house,’ says Alena. Now each vast — and rather empty — room has a theme: the grand hall is a doodled Noah’s Ark, the stairs are Heaven- and hell-themed with Adam and Eve in the Garden of Eden on the upstairs landing and sharks on the downstairs hall floor. There are racing animals, aliens in spaceships, TV cartoons and burgers.

It’s all pretty amazing but, even aside from the echoey rooms and strong smell of paint, it’s quite an assault on the senses. The walls almost throb with doodles.

I’m not sure I can imagine actually living here, but Sam and Alena insist they can’t wait to move in permanently from the annexe next door. And, they say, they love nothing more than sleeping in their doodle bed under their doodle duvet after brushing their teeth in their doodle bathroom. 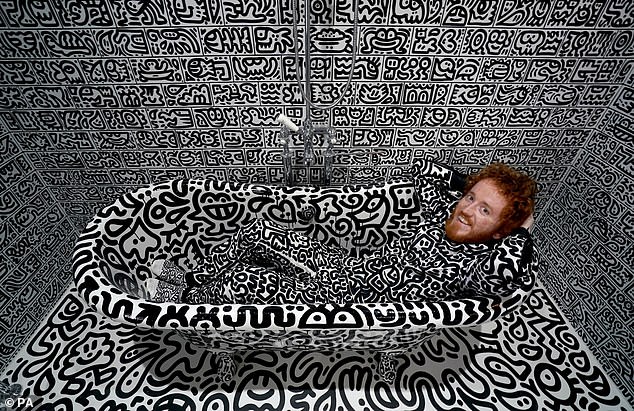 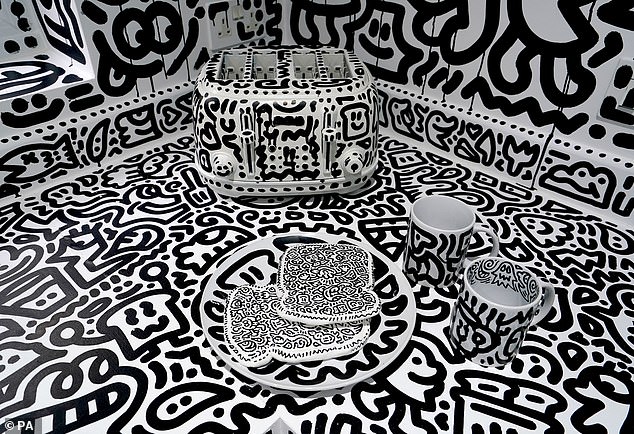 And in the kitchen so have the  microwave, the oven extractor hood and even some fake toast, for effect.

‘It’s wonderful! We love it. The longer you stay, the more you get used to it. And it’s so nice falling asleep looking at all the characters,’ says Alena earnestly.

There’s certainly a lot to look at — if not much furniture. Or any books, pictures, cushions or, well, signs of life. There’s no colour at all — other than Sam’s wonderful red hair. Even their cockapoo, Joey, is black.

‘I had wanted a Dalmatian, but we decided not to,’ says Sam.

Sam is a lovely chap, but it’s safe to say he was always stood out from the pack. He grew up barely five miles away — the middle of three sons to parents who ran a news agency.

From the age of three, he was doodling constantly — at school, during lessons, in the margins of his homework, at home, on the walls, often until the early hours of the morning. ‘I’d sneak back downstairs and my parents would find me hidden under a table, drawing,’ he says. ‘I had to do it.’

When he was 15, someone told him that only five per cent of aspiring artists make it. ‘So I knew I had to give it everything I could, otherwise I’d regret it,’ he says. ‘I drew all the time — every night until three or four in the morning. All weekend.’

He didn’t play football, or waste time at the pub — and really had no other hobbies. 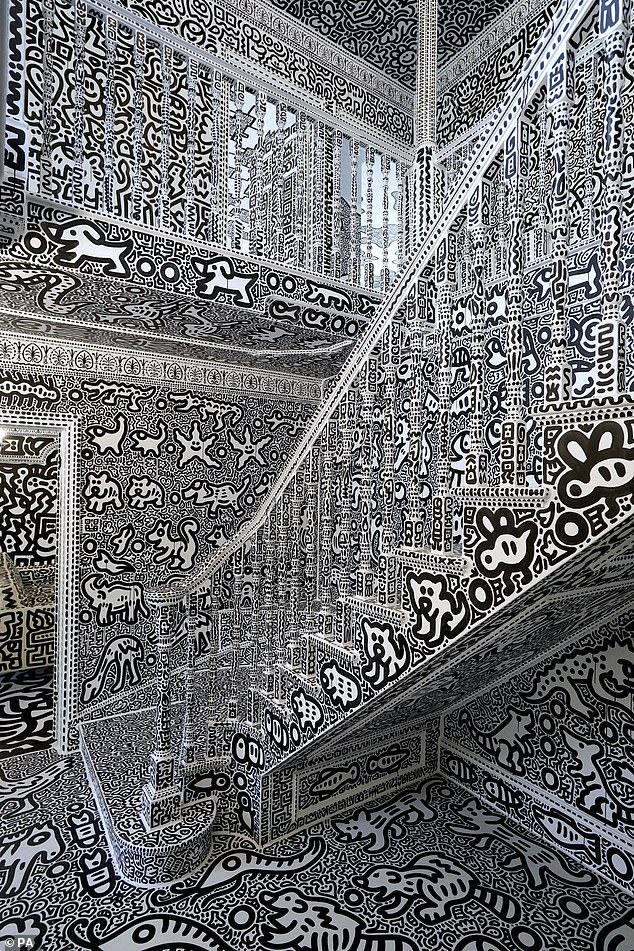 Each vast — and rather empty — room has a theme: the grand hall is a doodled Noah’s Ark, the stairs are Heaven- and hell-themed with Adam and Eve in the Garden of Eden on the upstairs landing and sharks on the downstairs hall floor 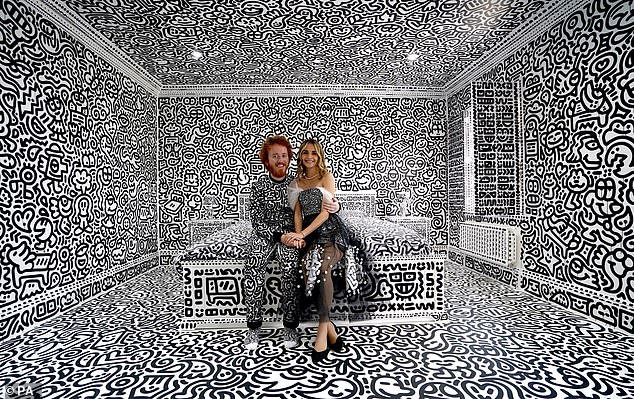 ‘I did go to parties, but I’d take a sketch book and draw.’

Brilliantly, his friends accepted him as he was, checking up on him and bringing him food when he became too immersed in his work.

It was at the University of the West of England, Bristol, where he studied illustration and started to wear clothes he’d doodled on, that a tutor nicknamed him the Doodle Man. Sam loved it and created an artistic alter ego.

‘There’s no plan, no pencil. It just flows out. Sometimes I’m at it for 18 hours and I often have no recollection of what I’ve drawn,’ he says. ‘But doodling is the best feeling ever. I love building these universes of happy characters. It brings me joy.’

His big break came in 2017, when he opened a Mr Doodle pop-up shop in East London. Suddenly, a Facebook video of him doodling on the white walls, floors and ceiling was viewed 46 million times in a week.

Then came collaborations with Fendi, Puma, Adidas and Samsung; lucrative commissions; even Mr Doodle boxer shorts. His work took off in Asia and, by December 2020, his bigger pieces were selling for up to £800,000 a pop — catapulting him to multi-millionaire status, despite being given short shrift by many art critics. 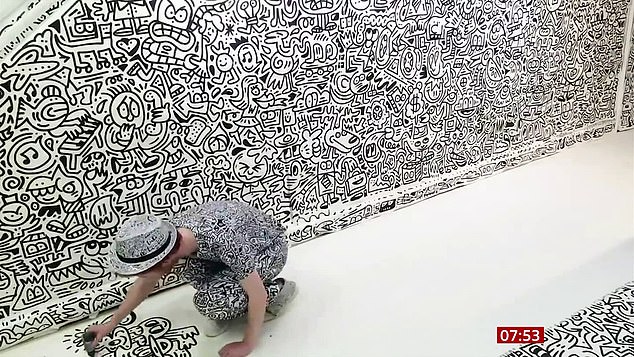 Despite promising the previous owners that he wouldn’t doodle all over the house, he made a start as soon as they moved in

‘Some love it, but others say, ‘This isn’t art. It should not be validated’, and a few claim it’s a rip off of American graffiti artist Keith Haring. Which doesn’t feel fair,’ says Sam. ‘I think Keith is an amazing artist and he has inspired me, but so have other artists.’

It was soon after the success of his pop-up that he and Alena, a fellow artist from Kharkiv, Ukraine, met.

‘I found myself mesmerised by the videos [of his doodles] and messaged him to say how brilliant they were,’ she says.

After six months of chat about art, they met in Berlin and, as she puts it, ‘that was that’. ‘On our first date, he told me that he had this big dream — one day to buy a big white mansion and doodle all over it. I thought that was a very brave dream and I had my full belief in him.’

As we slide through in our socks — no shoes allowed in the Doodle House — the best bit is the grand hallway, with the master en-suite bathroom and its 2,000 individually doodled tiles a close second.

The outside — brickwork, garden walls, statues, flagpole, flag, Doric pillars, garage doors, all done with spray paint rather than marker pens — doesn’t work quite so well. But Alena’s new, doodled Tesla — which took Sam just four hours — is rather impressive.

It’s a good thing he has stuck closely to his two strict criteria upon buying the house. First, that it must not be visible from the road for fear of upsetting the neighbours. And second, that they remain close to their family — all of whom have rallied around to support them. Sam’s uncle has been a huge support. 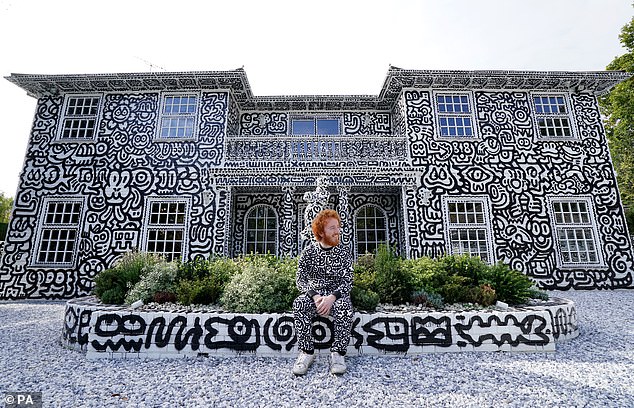 ‘I was a bit nervous about it but so proud of what I’ve created,’ Sam says. ‘But even if only one person in the world liked it, is moved by it, I’d be happy.’

Alena’s Ukrainian parents, who fled here in March after the war broke out, helped design the 2.8-acre garden.

Sam’s 83-year-old grandfather, David helped paint all the walls white and was a huge support when, in early 2020, the stress of juggling everything Doodle became overwhelming. ‘It’s a bit of an obsession really and it all got a bit much for [Sam] when things really took off. He’d have a phone stuck to his ear and he’d be drawing on canvases while negotiating contracts and payments,’ says David. ‘I said, ‘You’re doing too much.’ ‘

After contracting flu, by his own account, Sam started hallucinating that he was living in a video game as Mr Doodle, and had to spend six weeks on a psychiatric ward. It must have been a dark time for them all, but today he looks great, is lovely company and seems utterly content. ‘Every day is such a happy day now,’ he beams.

But of course it is! He’s rich, famous, can sell his doodles around the world for vast sums and, aged 28, has already fulfilled his wildest childhood dream. Perhaps the only downside of achieving your life’s ambition when you’re so young is working out what to do next.

Watch out, people of Tenterden!

Your guide to top movie and TV filming locations, from Emily in Paris to Ticket To…