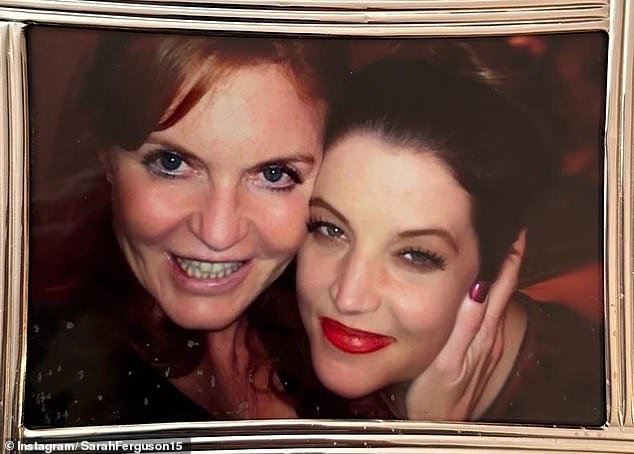 A tearful Sarah Ferguson quoted the late Queen as she paid a touching tribute to the children of her close friend Lisa Marie Presley at her funeral service.

Ms Presley, the daughter of famed singer Elvis, died after suffering a cardiac arrest at her home in California aged 54 on January 12.

Thousands have gathered for her public funeral at the Graceland estate in Memphis today, where she will be buried alongside her father and son Benjamin, who died by suicide aged 27 in July 2020.

Fergie became a close friend after the pair met for the first time in the US in 2009, before Ms Presley attended the Duchess’ 50th birthday party at London’s Lanesborough Hotel that same year. 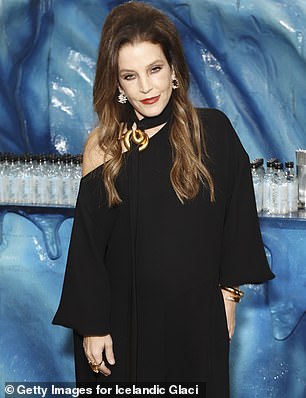 Lisa Marie Presley, 54, was last seen in public on January 10 (above) at the Golden Globes

Inside the ‘sister-like’ relationship between Lisa Marie and Fergie

Lisa Marie Presley and Sarah Ferguson forged a ‘sister-like’ friendship through the shared experience of their former partners being embroiled in sex scandals, The Mail on Sunday can reveal.

The Duchess of York is planning to fly to the US to attend the funeral of Elvis Presley’s only child at his Graceland estate in Tennessee.

Lisa Marie, who died aged 54 on Thursday after multiple heart attacks, had comforted Fergie, 63, as she dealt with the fallout over Prince Andrew’s relationship with convicted paedophile Jeffrey Epstein.

From 1994 to 1996, Lisa Marie was married to pop superstar Michael Jackson, who was the subject of allegations of child abuse.

Lisa Marie had been through all the accusations that he was a paedophile but she went to her grave believing Michael was innocent. She was a rock for Sarah when the sex allegations against Prince Andrew were made.’

Lisa Marie’s eldest daughter, actress Riley Keough, 33, is close to Fergie’s daughters Beatrice and Eugenie. The friend said of Fergie: ‘She’s utterly heartbroken. They were as close as sisters. Sarah is planning to fly over to attend the funeral.

They spoke almost daily on the phone. This was a precious friendship to both of them, which is why they kept it so private. Lisa Marie didn’t trust many people outside her family but loved Sarah.’

Ms Presley also stayed at the duchess’s villa in Marbella to privately grieve the death of her ex-husband Michael Jackson.

Speaking at the service today, Fergie said it was a ‘great honour’ as she described Ms Presley as ‘extraordinary’.

She told mourners: ‘You talked about the flames and I think it’s time that we all need to stoke our flames within to do what Joel said, which was to celebrate the extraordinary Lisa Marie.

She continued: ‘Sissy this is for you with affection. My late mother-in-law used to say that nothing can be said can begin to take away the anguish and the pain of these moments because grief is the price we pay for love and how right she was.

‘Action is the way we can go forward, we can light the flame. So for Riley, for Harper and Finley and the entire family, we march forward in support of you. All of us are with you. If you just put out your hand we will be there. I will definitely be there.’

Fergie rounded off her tribute with an extract that David Frost had written for his son George prior to his death.

She said: ‘I have had my life and enjoyed every second, but as it is, another life has beckoned. It is important to know that I’ve not gone, and I hope that all you on my light has shone.

‘Stay in that sunshine, rest never in the shade. Don’t curse my absence as this light you’ll evade. I live in the smiles, the moon the stars and sky and I feel eternal pride as I watch you all fly.

‘And for my darling children who wonder what to do, just have a wonderful time as I will living through you.

Fergie’s tribute comes after she took to Instagram to post a moving message about Ms Presley last week.

‘You were my sissy, an amazing mother to Ben, Riley, Harper and Finley and a superbly loving daughter to Priscilla.

She added: ‘You have been my devoted friend for many years and I am here for your family to support and love them.

‘I am deeply saddened my sissy, you are in my heart.’

Ms Presley’s body was on display to the public during the celebration of life at the family’s estate, which was livestreamed at 9am central time.

Some mourners held flowers as they waited for the service to begin under the tall trees on the lawn of Graceland, the home where Lisa Marie lived as a child with her father.

The mansion, which Lisa Marie Presley owned, has been turned into a museum and tourist attraction that hundreds of thousands of fans visit each year to celebrate the life and music of Elvis, who died in 1977.

A procession was planned for fans to view her headstone, where they could leave flowers or other offerings.

Those in attendance included her daughter, actress Riley Keough, and her mother Priscilla Presley. 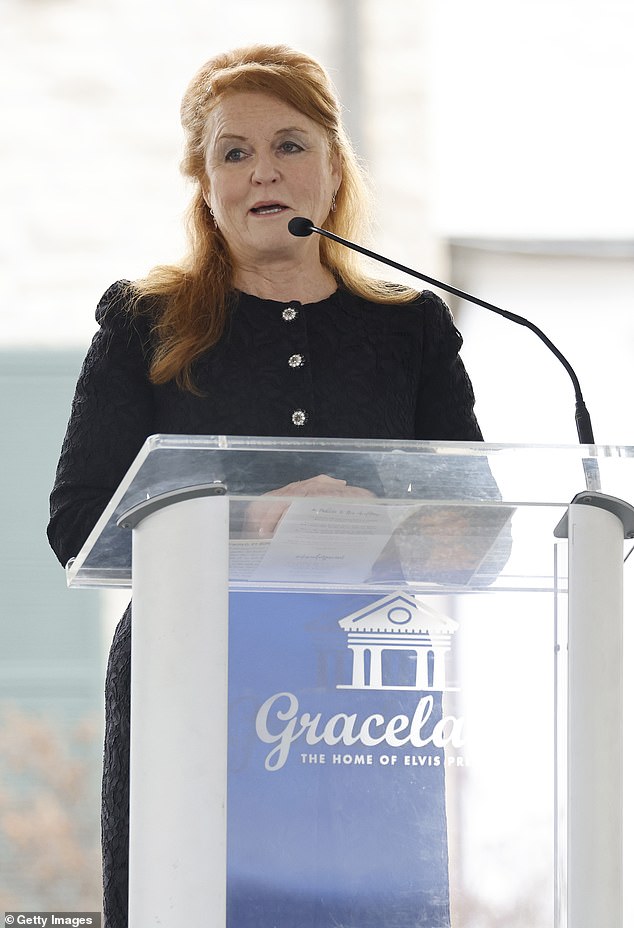 Speaking at the service today, Fergie said it was a ‘great honour’ as she described Ms Presley as ‘extraordinary’ 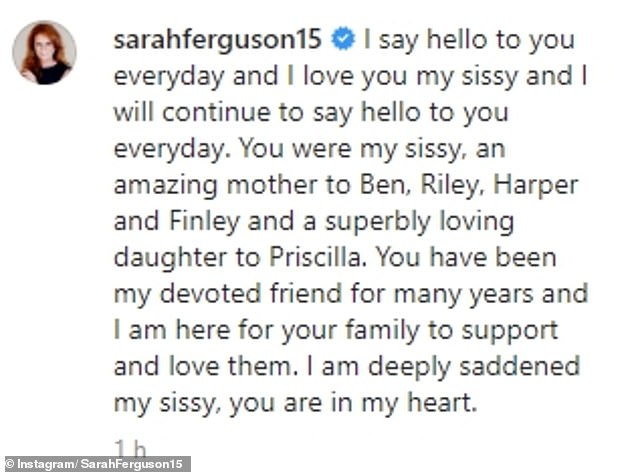 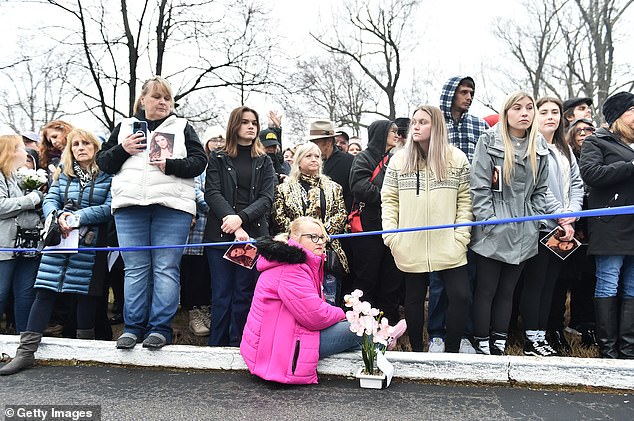 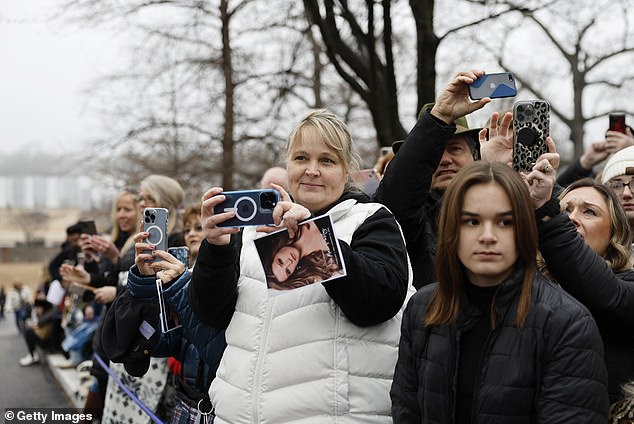 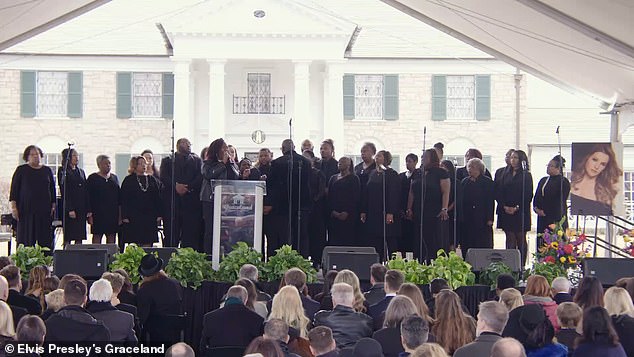 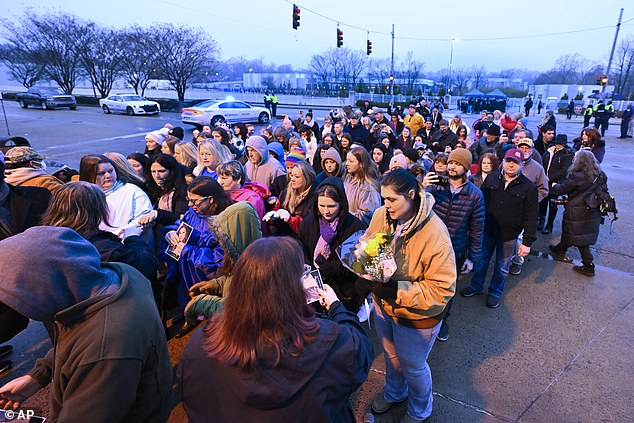 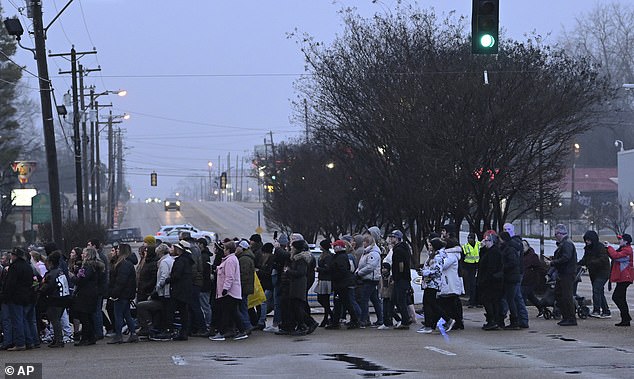 Fans cross Elvis Presley Blvd. to enter the main gate of Graceland ahead of the funeral service today 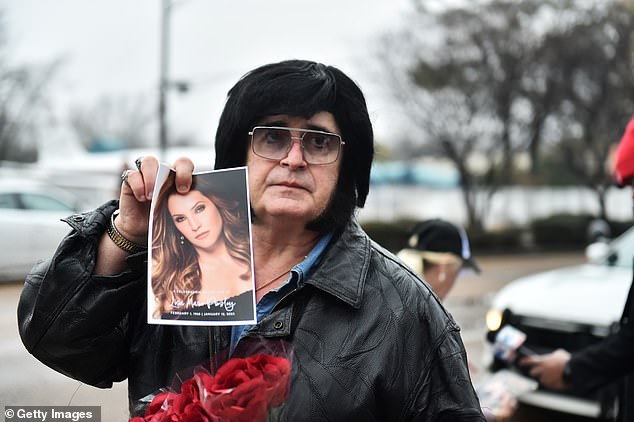 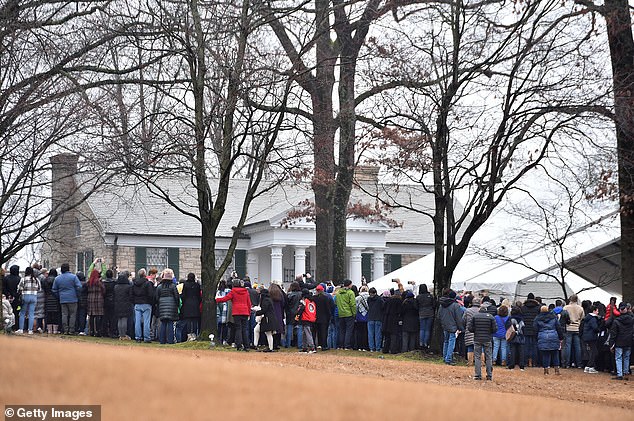 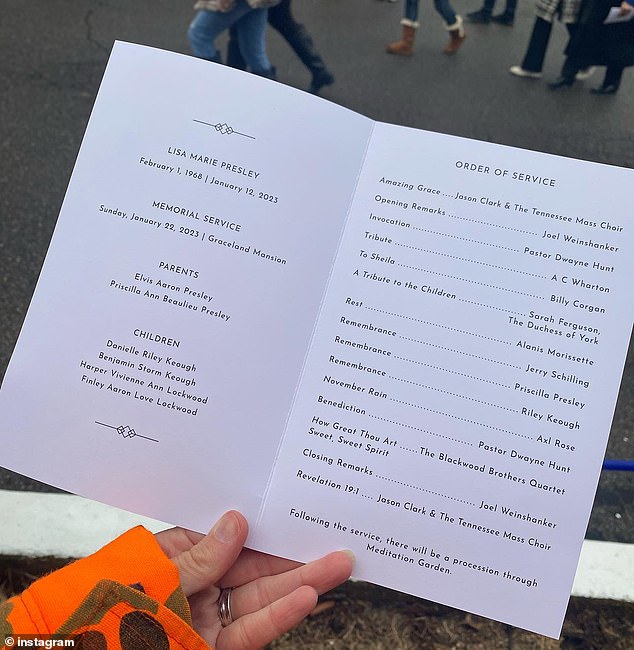 A schedule of events for the public memorial service detailing performances by Alanis Morissette and Axl Rose, with eulogies from mother Priscilla and daughter Riley

Graceland’s 450-room hotel was now sold-out for the event, chief executive of Memphis Tourism Kevin Kane told the Times, while hotels near the museum and Beale Street ‘seeing an uptick in last minute reservations for the weekend.’

A stage was also constructed for the public service on the front lawn with a podium. Hundreds of seats were set out around it and screens were erected around the burial site.

Jason Clark and The Tennessee Mass Choir opened the proceedings with a powerful rendition of Amazing Grace.

Filmmaker Joel Weinshanker then said Ms Presley had requested that her funeral ‘not be sad’, before adding that they would try to honour her wish in the coming proceedings.

This was followed by Pastor Dwayne Hunt delivering a prayer, saying: ‘While her light has gone out, she leaves this light to her children and her mother so that they can rise above the darkness of this grief.

‘Let them be strengthened by the presence of the many who have gathered today to share their sorrow. Even in this time of pain, we are grateful for the beautiful gift that was Lisa Marie.’

‘Her passion, her strength, her brilliance and her tenaciousness. And let the memories share today and the word spoken today bring joy to our hearts.

‘May we all experience your peace in our pain, your healing in our hurt, your light in our darkness, in the name of this place where we stand in Graceland reminds us to be thankful for grace that gives us strength even in our weakness.

‘So, let immeasurable love abound in this place and make her peace abide in our hearts, Amen.’

The former Mayor of Memphis recalled the ‘hard times’ the city faced when Ms Presley was born in 1968, but pointed to how important her birth was at the time. 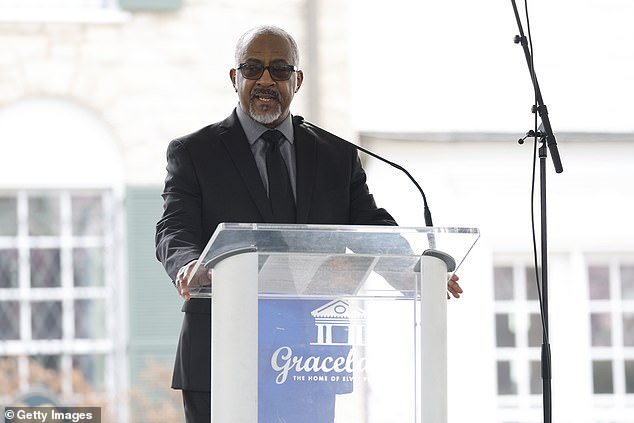 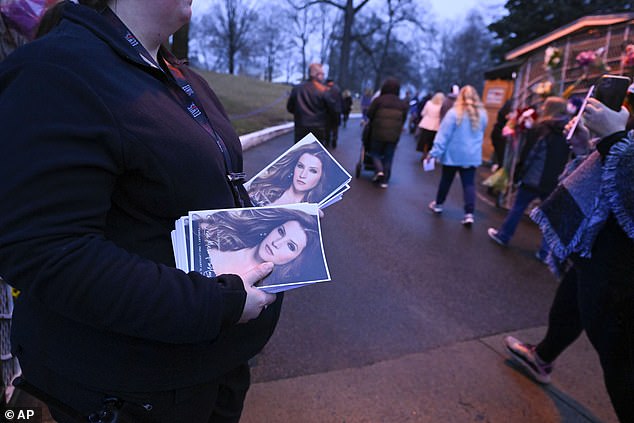 As the only daughter of the King of Rock and Roll, he described her as ‘the conduit to the throne’ and ‘the keeper of the flame’.

Wharton added: ‘I don’t know much about Hollywood, I can’t speak for New York or any other city where Lisa may have spent time, but I can tell you that Lisa Marie was this city’s precious jewel.’

Billy Corgan then performed To Sheila by The Smashing Pumpkins.

Lisa Marie was married four times, firstly to guitarist Danny Keough who she met as a teenager at a drug rehabilitation centre and with whom she had two children – Benjamin and Riley.

She later eloped with Michael Jackson in 1994, with the marriage lasting a year and a half.

After being engaged to musician John Oszajca, the pair broke up and she married actor Nicholas Cage in August 2002 before filing for divorce three months later.

Her final husband was guitarist Michael Lockwood and the pair were married for 10 years from 2006, having two twin daughters.