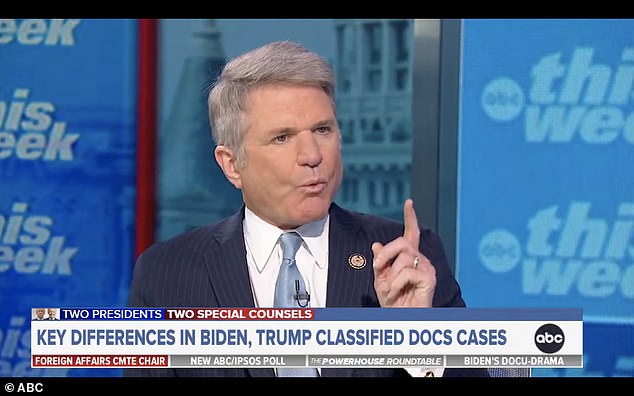 Michael McCaul suggested that Joe Biden’s classified documents scandal could be as big as Watergate as he demands the president be prosecuted — and even more Democrats jump in to admit it was a misstep.

The Department of Justice (DOJ) found six more classified documents at Biden’s Wilmington, Delaware home this weekend, prompting questions about whether the FBI will finally search the president’s other homes.

It is now known that Biden has taken at least somewhere between 25 and 30 secret documents from the White House from his years as vice president and stored them in his home in Delaware and his think tank in Washington DC.

Democratic Senator Tim Kaine said there isn’t really a way to “accidentally” take home classified materials and documents because of how they are handled.

Rep. Michael McCaul, chairman of the House Foreign Affairs Committee and panelist on the Homeland Security panel, suggested President Joe Biden’s classified documents scandal could be as big as Watergate

“This broke a week before the midterm elections, and they swept it under the carpet… Watergate started out as a very small break-in. It led to the resignation of the President of the United States. So I don’t know what’s up,”
Rep. McCaul says of Pres. Biden documents. https://t.co/U0c4dTpKYX pic.twitter.com/nJPqPUXAOf

“I don’t really know the answer to that question,” the Virginia senator said when CBS Face the Nation host Margaret Brennan asked how it could be an “accident.”

“I review classified materials as a senator on the Armed Forces and Foreign Relations Committees, but when I do it is always in a secret building where I have no access to the materials except to sit there and read them,” noted he up. .

Kaine reiterated the need for an independent investigation into the latest scandal.

“How many documents are we talking about?” he wondered.

Rep. McCaul, who chairs the House Foreign Affairs Committee and sits on the panel for Homeland Security, said Biden’s handling of the documents was irresponsible. 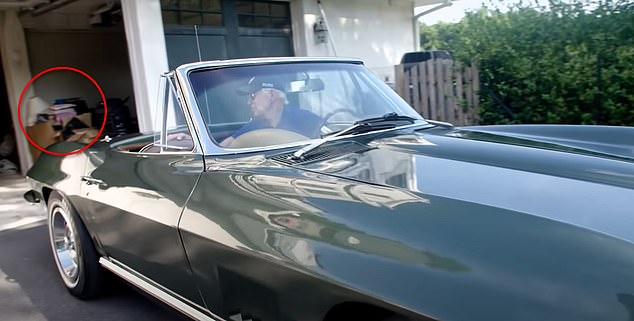 The Justice Department found six more documents on Biden’s property in Wilmington, Delaware, prompting questions about whether they should search the president’s other properties

“I don’t know what these documents are about,” McCaul told ABC This Week host Martha Raddatz on Sunday. “I only know that the documents were there.”

“Just a lot of unanswered questions,” he added. “This broke a week before the midterm elections and they were swept under the carpet. Now we just figure it out.’

“You know, Watergate started out as a very minor intrusion and it led to the resignation of the President of the United States,” McCaul said when asked if Biden’s actions would have political repercussions. “So I don’t know what’s in there until we see the documents.”

Watergate was a major political scandal involving President Richard Nixon’s administration that led to his resignation. It stemmed from the then president’s attempts to cover up involvement in the June 17, 1972 burglary of the DNC headquarters in the Watergate Office Building.

McCaul complained that if he or his wife took classified documents home from work, they would be prosecuted. 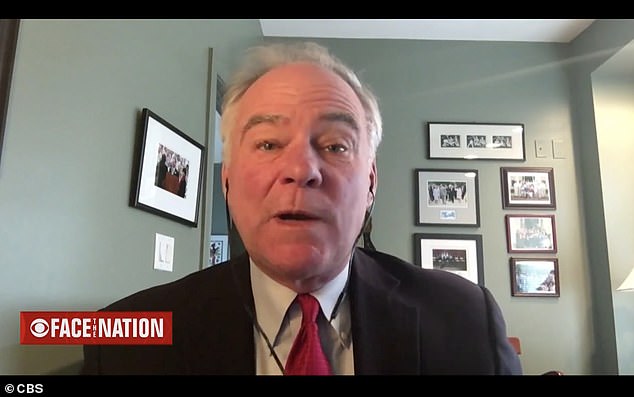 .@margbrennan: How does someone accidentally take secret material home?

“I don’t really know the answer to that question,” said Senator Tim Kaine. Adding that when he reviews classified materials, “it’s always in a classified facility.” pic.twitter.com/RKOYmxtQ5a

“There should be a different standard even if you — you know I know he says he released them you know Biden called it totally irresponsible but still he’s guilty of the same sin if you will by this documents to take home,” he said.

“Why are they taking these documents home? I do not understand. I’ve lived in a secret world for a long time.’

Federal officials are “now considering whether to seek searches” in other areas to find more material at Biden’s Wilmington home.

This may include searching the president’s vacation home in Rehoboth Beach, Delaware, where Biden went on his weekend away from Washington, D.C., because he avoided going to his residence where the Justice Department searched his files.

Meanwhile, James Comer, chairman of the House Oversight Committee, said his investigation into the Biden family was entering the “next phase.”

These probes reportedly involve both the president’s classified documents and finances — along with those of his son Hunter Biden.

Centrelink tells receptionist she owes them $65,000