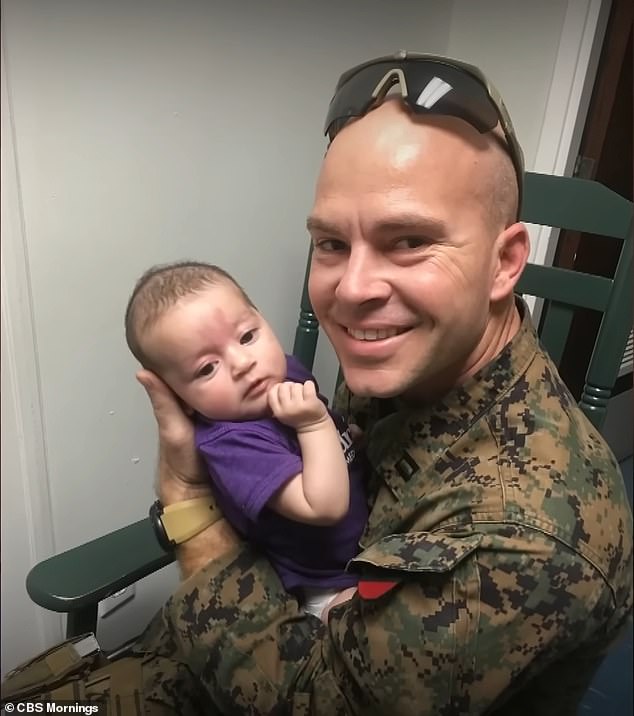 The US Marine accused of kidnapping an Afghan war orphan has spoken out to defend his adoption of the three-year-old girl, at the center of an international custody battle.

Marine Major Joshua Mast and his wife Stephanie currently have custody of the girl, identified as ‘Baby L’, who survived a Special Operations attack that killed her parents and five siblings in 2019 when she was two months old.

But an Afghan couple related to Baby L, who raised the girl, claimed in lawsuits that the Masts lured them to the US under false pretenses in August 2021 and took custody of her without their consent.

In an interview with CBS News on Tuesday, the Masts strenuously denied the claims, saying they were outspoken about their intentions and only wanted what was best for the girl.

“We’ve been honest about who we are and our concerns about the child from day one,” says Stephanie Mast.

“I don’t think I used the word adoption,” Joshua Mast confessed about his conversations with the Afghan couple. “We tried to explain it again in a way that they would understand, because they have no idea about adoption in Afghanistan.”

Marine Major Joshua Mast is seen with ‘Baby L’, the Afghan war orphan he adopted. Relatives who raised the girl accused him of taking her without permission 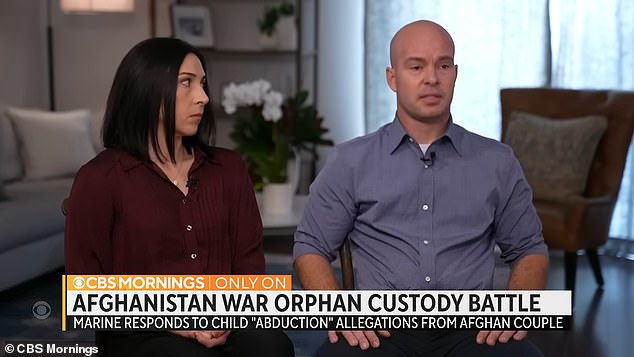 Marine Major Joshua Mast and his wife Stephanie spoke out to defend their adoption of the three-year-old girl, at the center of an international custody battle

The case is currently in court, and in November the U.S. Justice Department filed a motion to intervene in the legal battle, arguing that Mast’s adoption was a violation of Virginia law and should never have been allowed .

The government also said Mast’s efforts to take the child in directly conflicted with a US foreign policy decision to reunite the orphan with her Afghan family.

The Masts claim in court documents that they legally adopted the child and that the accusations made by the Afghan couple are “outrageous” and “undeserved.”

The dispute over Baby L has its origins in a September 2019 US raid on a remote Afghan compound, which killed both her parents.

Unclassified military reports state that Baby L is believed to be the orphaned daughter of a foreign Al Qaeda fighter who entered Afghanistan through Turkmenistan, according to CBS.

The girl was rescued by US Special Forces, reportedly because of the protests of Afghan military partners, who advocated leaving her to die or drowning her, a former army ranger who was present told the network.

“They wanted me to throw the baby in the river because they thought she was a terrorist,” said the former Ranger, who asked not to be identified to security majors. 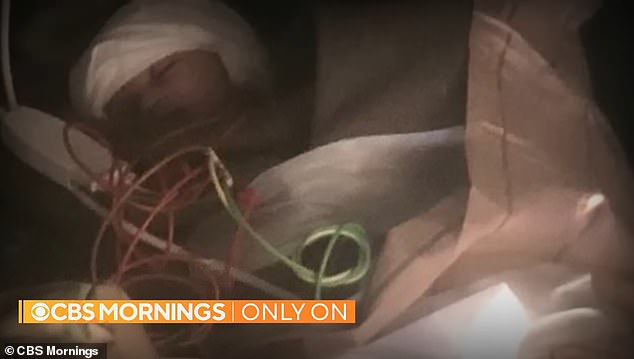 Baby L is seen moments after her parents were killed in a Special Forces raid in Afghanistan. Operators made an ad hoc baby seat for the girl to take her back to base 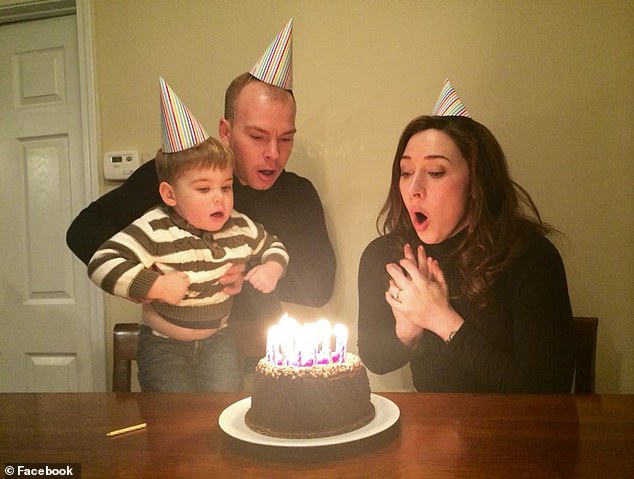 Stephanie and Joshua, seen with one of their sons, are accused of using US courts to get the girl into their custody, instead of following Afghan law

Instead, the girl was returned to base and treated for significant injuries. That’s where Joshua Mast, a Marine attorney who wasn’t on the raid, first heard about the child and called his wife to discuss her adoption.

‘The moment we heard about [Baby L] for the first time, it wasn’t a hard decision to make,” Stephanie Mast told CBS. “It was just, there was an innocent child caught in an unfortunate situation, and we wanted to see if there was anything we could do to help, and we did.”

While she was recovering from injuries in a US military hospital, the Afghan government and the International Committee of the Red Cross identified her relatives and, through meetings with the State Department, arranged for their reunification.

The child’s cousin and his wife — young newlyweds with no children of their own — cried when they first saw her, they told the Associated Press, saying that taking her in and raising her was the greatest honor of their lives.

Mast, however – reportedly despite orders from military officials to stop interfering – was determined to take Baby L home to the United States.

According to the AP, he used his status in the military, appealed to political connections in the Trump administration and persuaded the small Virginia court to skip some of the usual safeguards for international adoptions. 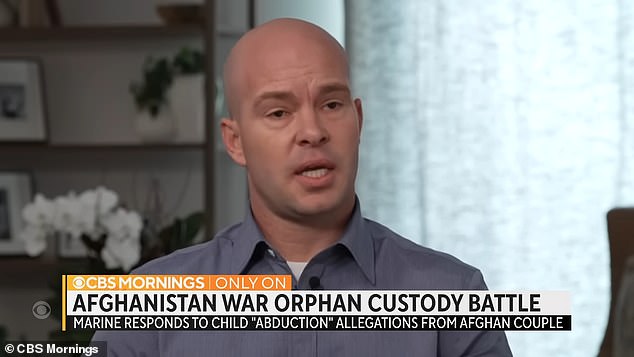 In court documents, Mast says he acted “admirably” in bringing the child to the United States and caring for her with his wife 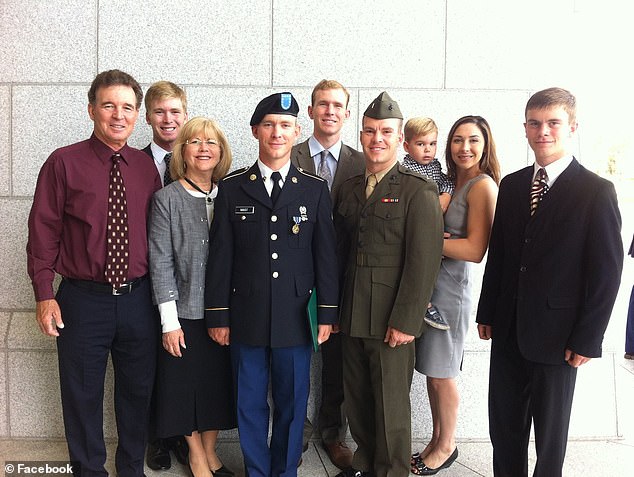 Mast with other members of his family. His father, Dick (far left) is a professional golfer who used to play for the PGA. His mother Roberta (second from left) is a realtor in Virginia

Finally, when the US military completed its withdrawal from Afghanistan in the summer of 2021, he helped the Afghan family come to the United States.

After they arrived, they say, he took their baby from them at the National Guard base in Fort Pickett Virginia.

They have not seen her since and are pursuing a lawsuit to get her back, saying in court documents that they believed they were taking Baby L to the US for medical treatment, and never agreed to give up custody .

The Afghan woman said she plunged into a deep depression and, despite being nine months pregnant, stopped eating and drinking. She couldn’t sleep. Her husband was afraid to leave her alone.

“Since we came to America, we haven’t felt a day of happiness,” the Afghan man told the AP. “It feels like we’re living in a dark prison.”

The Afghan woman gave birth to a daughter just weeks after she lost custody of Baby L.

The Afghan couple are named in court documents as John and Jane Doe, requesting anonymity over fears for their safety and concern for their relatives in Afghanistan, now under Taliban control. 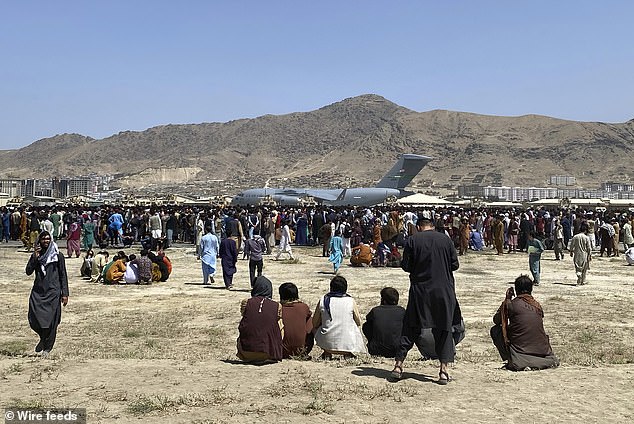 Hundreds of people gather at a U.S. Air Force C-17 transport plane at the perimeter of the international airport in Kabul, Afghanistan, during the U.S. withdrawal in August 2021

Although the former Afghan government determined that the Afghan man was Baby L’s first cousin, so far there is no DNA evidence to support their blood relationship.

In court documents, Mast says he acted “admirably” in bringing the child to the United States and caring for her with his wife.

They say they have given her “a loving home” and “have done nothing but make sure she gets the medical care she needs, at great personal cost and sacrifice.” Mast celebrated his adoption of the child, whose Afghan family is Muslim, as an act of Christian faith.

In court, Mast, still an active-duty marine, doubted whether the Afghan couple is related to her at all.

The Masts claim the little girl is “a war orphan and a victim of terrorism, rescued from the battlefield under tragic circumstances.”

They say she is a “stateless minor” because she was picked up from an encampment that Mast says was used by foreign fighters and not Afghanistan.

The case has become so popular that the White House has commented on it.

“We are all concerned for the well-being of this child who is at the heart of this case,” White House press secretary Karine Jean-Pierre said after the AP first reported on the case in October.

On the other side of the world, the Taliban issued a statement saying they will “seriously discuss this matter with the US authorities so that said child will be returned to her relatives.”

The case is currently under seal in a Virginia state court, and in a parallel federal lawsuit brought by the Afghan couple.

Two days after the CBS News interview with the Masts was taped, both families were given gag orders preventing them from speaking to the press.

How to survive an avalanche, from making your way through the snow to making an air pocket