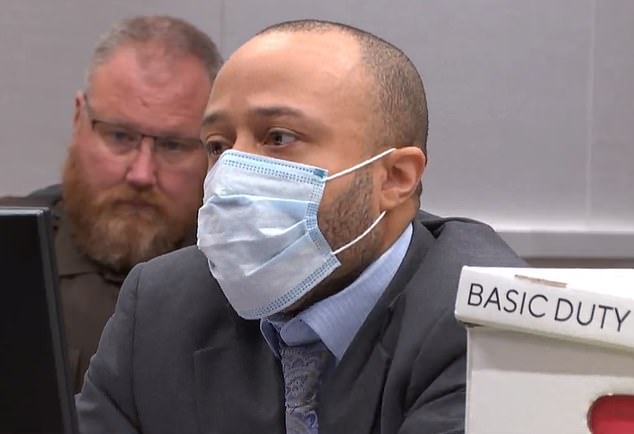 The man who allegedly ploughed through the crowd at a Wisconsin Christmas parade, killing six people, apologized to the victims’ families and the court for his erratic behavior in the courtroom last week.

Darrell Brooks, 40, was thrown from the courtroom on Thursday after repeated interruptions, outbursts, and a spat with the judge – only to appear shirtless while livestreaming in from a sperate room.

But on Monday, a different Darrell Brooks appeared in court. This one had ditched the jailhouse orange and was fully dressed in a suit, with a a mask properly secured over his face, and kept a calm demeanor as he gave his apology, admitting: ‘I wasn’t raised that way.’

Brooks is accused of driving his car through the Christmas parade in Waukesha, Wisconsin on November 21, 2021, killing six people between the ages of eight and 81, and injuring more than 60 people.

Darrell Brooks, 40, who is accused of killing six people during a Christmas parade in Waukesha, Wisconsin, apologized for his erratic behavior in the courtroom last week 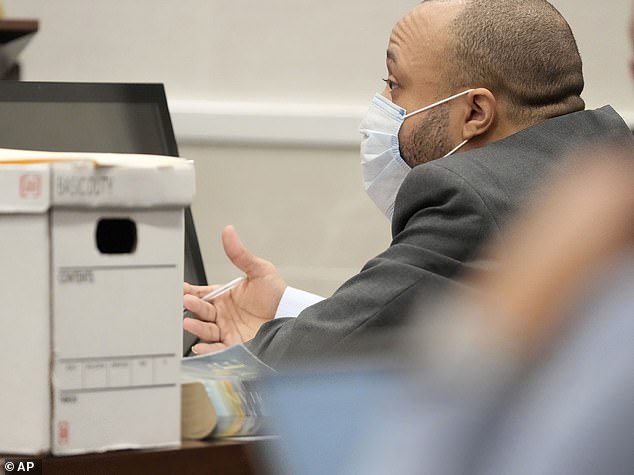 On Monday, a different Darrell Brooks appeared in court fully dressed in a suit, with a calm demeanor as he gave his apology, admitting: ‘I wasn’t raised that way’

Brooks has been acting as his own attorney since last week, when he demanded Judge Jennifer Dorow dismiss his public defenders.

Since then, he has been interrupting the judge and on Thursday was ejected soon after when he got into a spat with the judge over his decision to wear prison attire in the courtroom.

On Monday morning, a solemn Brooks appeared before the court and just before witness testimony began, he announced that he wanted to apologize to the court for his actions last week.

‘I just want to state this for the record that I would like to issue the court an apology from me in regards to my actions last week during the trial,’ Brooks said.

‘I just want the court to understand it’s very emotional right now, not only for just the whole situation of the trial, the families here that have to go through, you know, everything that’s going to be involved with the trial. But also my family as well, myself, it’s very, very emotional. But not to excuse my actions and I should carry myself with better respect. I wasn’t raised that way. And I owe you, your honor, and the court an apology.’ 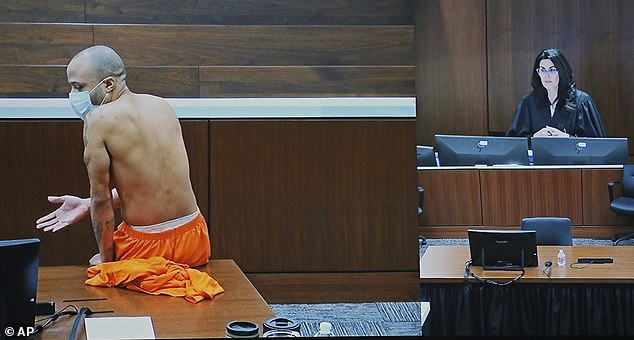 Brooks was thrown from the courtroom on Thursday after repeated interruptions, outbursts, and a spat with the judge – only to appear shirtless while livestreaming in from a sperate room 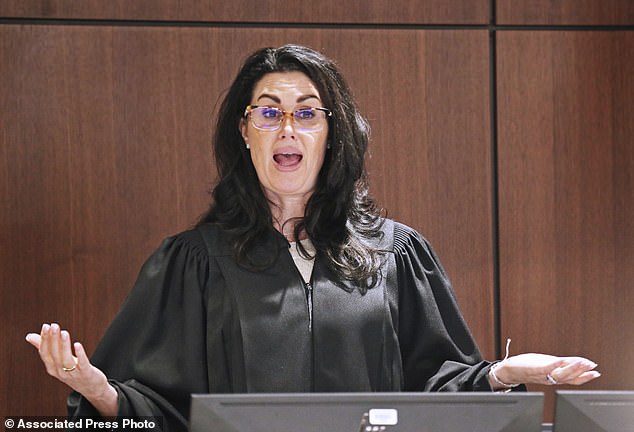 Waukesha Circuit County Judge Jennifer Dorow addresses Darrell Brooks continually refused to budge on Thursday, and after sending Brooks off to another courtroom explained that she would not back down despite his attempts to make a ‘mockery’ of the proceedings

Opening statements and witness testimony on Thursday were delayed due to Brooks’ incessant outbursts.

Waukesha County Circuit Judge Jennifer Dorow continually refused to budge, and after sending Brooks off to another courtroom explained that she would not back down despite his attempts to make a ‘mockery’ of the proceedings.

Once there, he took off his jail uniform shirt and sat on the defense table with his back to the camera. He could be seen gesturing and jabbing the table with his finger.

‘It’s very clear to this court that everything that he has done as outlined by the state and as made evident the court of this proceeding that it is the sole intent of Mr. Brooks to make mockery of this process,’ she said, as Brooks could be seen on a video feed with his shirtless back to the camera.

‘It’s important for the justice system to go forward with this proceeding. We are at the stage where we are at with Mr. Brooks muted in another courtroom because of his defiant actions, no one else,’ she added.

With his microphone muted at all times except when called on to speak or answer questions, Brooks could be seen wildly gesticulating in the other courtroom, arguing with court police, and holding up his objection sign to everything Judge Dorow said.

At one point, Brooks stuffed a laminated sign reading ‘objection’ into the waistband of his orange prison attire after the judge muted his microphone. 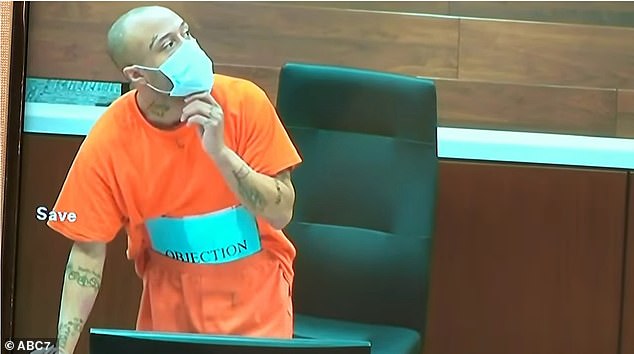 Opening statements on Thursday were delayed due to Brooks’ incessant outbursts 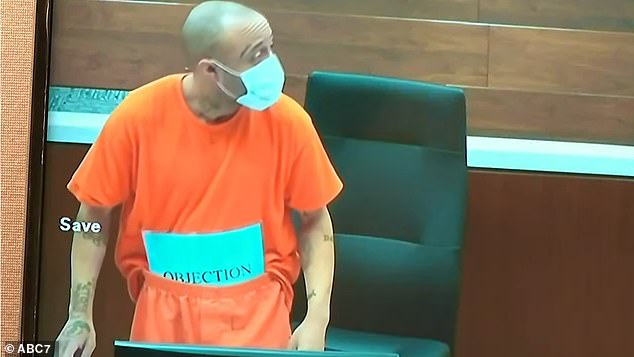 With his microphone muted at all times except when called on to speak or answer questions, Brooks could be seen wildly gesticulating in the other courtroom, arguing with court police, and holding up his objection sign to everything Judge Dorow said

‘At no time as has anyone in this case had a competency concern,’ she said, ‘I’m thoroughly convinced he is 100 percent competent to proceed trial. We are 100 percent convinced that his conduct [is]… deliberate and intentional. He is attempting to derail these proceedings.’

‘I share your observations,’ the judge said, adding she felt his behavior was merely an act of ‘defiance’ instead of a sign of poor mental health.

On day three of the Brooks’ trial, he was ejected from the courtroom while he asked the court to adjourn the trial over claims he was suffering from COVID-19.

On the second day he was ejected while repeatedly interrupting jury selection proceedings, read long passages from the bible, then appeared to fall asleep on the video feed from the other courtroom.

And on the first day, he was also ejected after his disruptive behavior during jury selection. 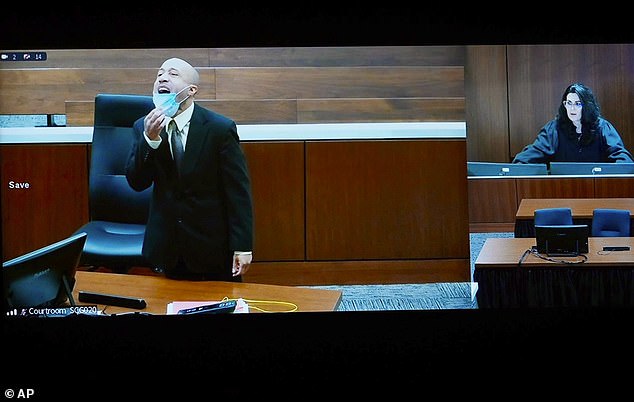 After a judge ordered Darrell Brooks to be taken to an adjacent courtroom, he yelled at the judge, pulling down his mask to be heard more clearly 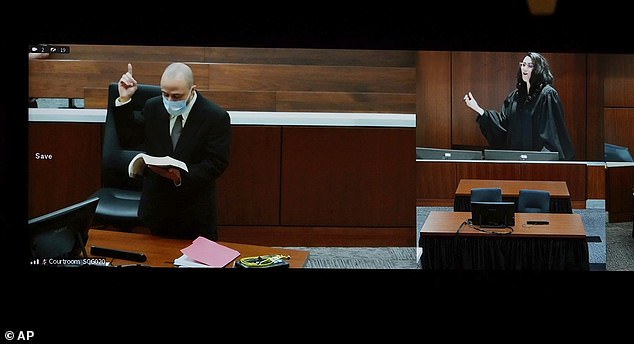 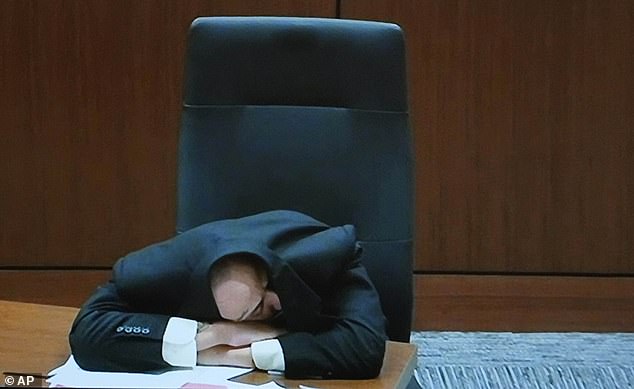 At one point, the 40-year-old appeared to fall asleep during the middle of the day 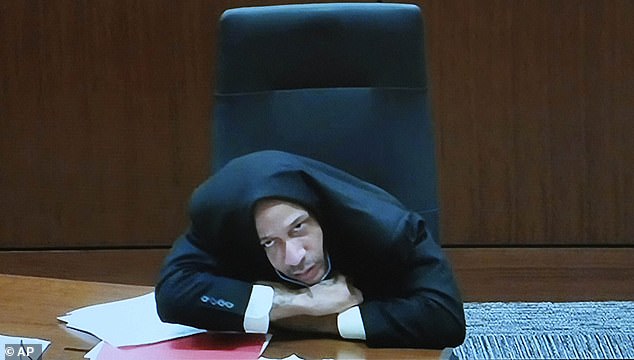 Brooks, a Milwaukee resident, was arrested near the scene of the attack on November 21, 2021 and has been in custody ever since.

Prosecutors say Brooks deliberately drove his car through police barricades and into the crowds participating in the annual parade in the city of Waukesha, about 15 miles west of downtown Milwaukee.

Brooks rammed through the crowd after allegedly confronting a woman outside of a motel before the parade.

Law enforcement officials said that the accused returned and punched that woman in the face and ran her over, as well. 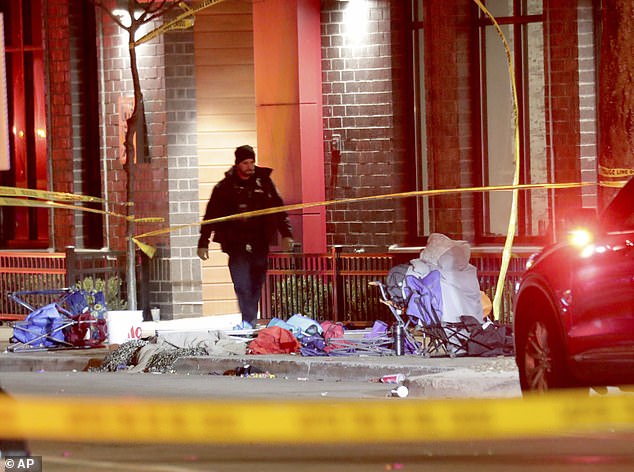 A first responder was seen examining the crime scene after Brooks allegedly drove through a crowd of people at high speeds during a 2021 Christmas parade in Waukesha, Wisconsin 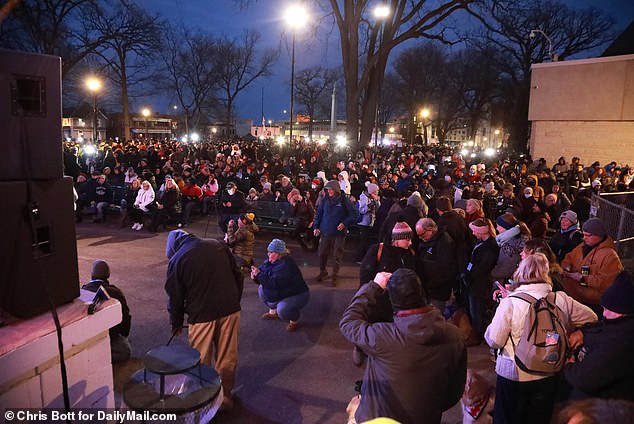 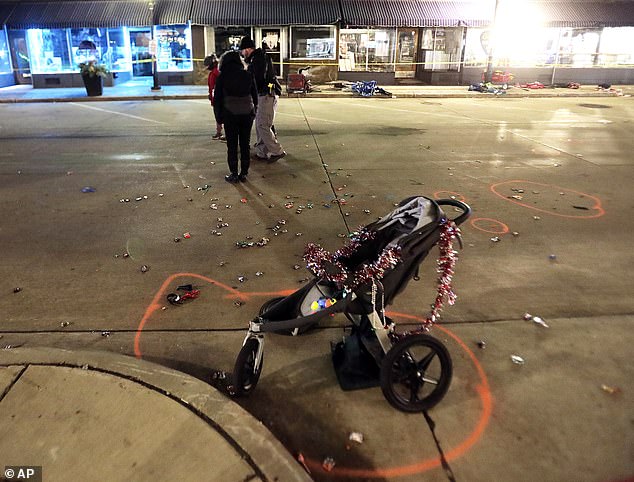 The ages of the people killed ranged from 8 to 81 years old, and more than 60 other people were injured, including at least 18 children.

Brooks, who was out on bail from a domestic abuse charge at the time of the attack, faces life in prison if convicted of the most serious charges.

The man has a lengthy rap sheet dating back to 1999 when he was first arrested for aggravated battery and carrying a concealed weapon.

Since then, he’s had at least 15 other run ins with the law.

Brooks has been charged with obstructing an officer multiple times, possession of a controlled substance, paternity warrants, failure to appear in court, and other charges.

One of his most aggressive charges came in 2010 when he was accused of strangulation and suffocation, as well as domestic battery.

Hundreds of people witnessed the attack, several recording cellphone videos, some of whom are expected to be called to testify by prosecutors from the Waukesha County district attorney’s office.

The trial had been scheduled to last about a month, but Brooks’ decision to represent himself may prolong the process even as Dorow has warned him that the court will not tolerate deliberate acts of obstruction, the Journal Sentinel reported.

This week’s issues in court were not the first in this trial, however.

During an August 26 appearance, Brooks fell asleep several times, and then ranted at Dorow, WISN reported.

‘You sit up here and act like you know me,’ he said, as she stood with her arms folded.

‘People like you don’t know nothing about where I come from,’ he continued.

Brooks was also heard to say that he was ‘bored’ by proceedings, and raged at sheriff’s deputies as they led him out of court at Judge Dorow’s instructions.

The accused called the trial ‘political’ and continued to verbally batter the judge.

At one point, Brooks told Dorow that he didn’t want to be there and wanted to return to his cell.

Brooks pleaded not guilty in February.

In April, his attorneys, public defenders Anna Kees and Jeremy Perri, filed a motion seeking to push the proceedings back until at least March 2023.

The attorneys argued in the motion they need at least six months to study more than 300 videos of the parade, break down the SUV’s speed throughout the incident, review the police interrogation of Brooks and reach out to potential expert witnesses.

The six fatal victims of the Waukesha Christmas Parade killer

Darrell Brooks, 39, now faces 61 counts of recklessly endangering safety by use of a dangerous weapon for each person injured at the November 21 incident, along with the six homicide charges, according to court records filed on Wednesday.

He is accused of plowing through the crowd at the parade on November 21, killing six and injuring dozen others.

Four of the five people who were killed were members of the Milwaukee Dancing Grannies. 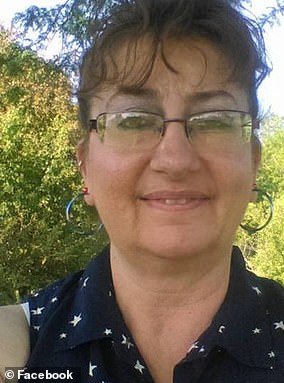 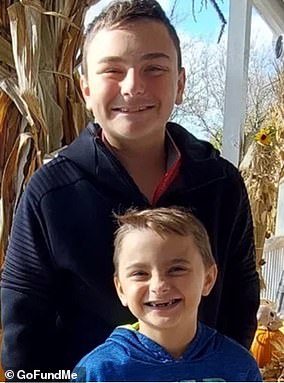 Jane Kulich, left, was a Citizen Bank employee who was walking with a parade float before she was fatally struck. The sixth victim of the tragedy was Jackson Sparks, 8 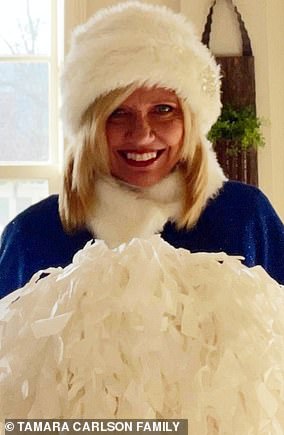 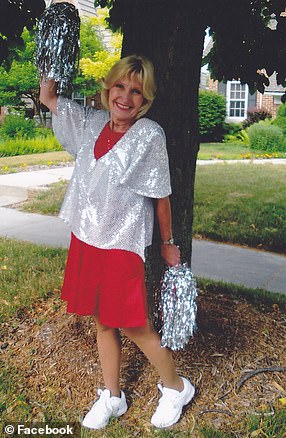 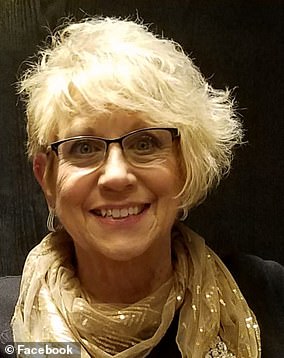 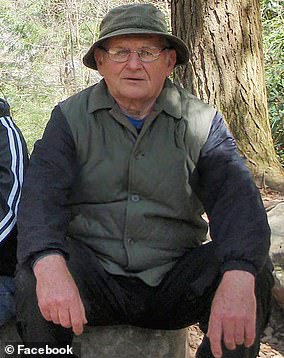 Virginia Sorenson (left), 79, was a nurse and member of the Milwaukee Dancing Grannies, a group of elderly woman marching in the parade. Wilhelm Hospel (right), 82, the husband of one of the grannies, died from internal bleeding

Post Politics Now: Less than a month and counting to the November midterms