What dog breed should I get? How different breeds attract different types of owners 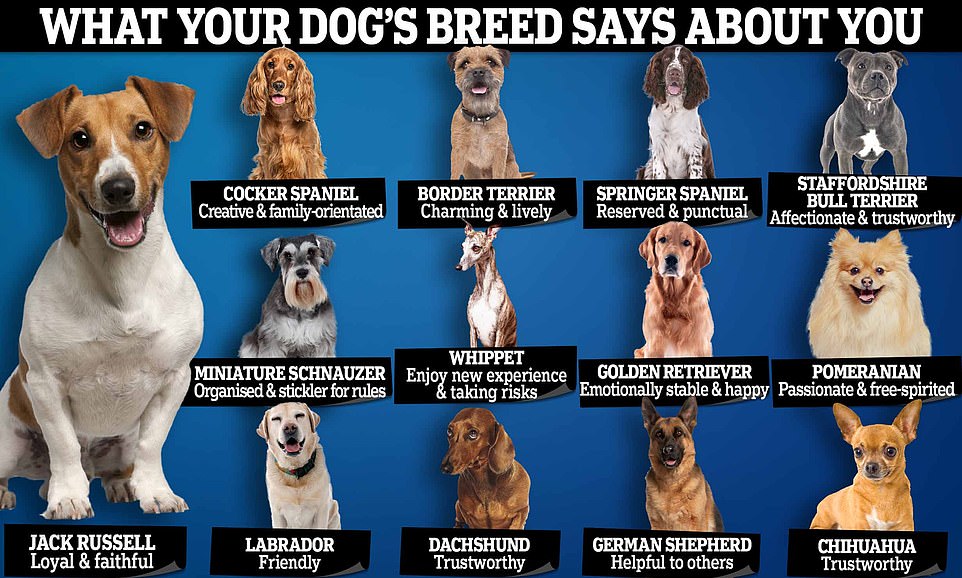 It is often said of dogs that they look like their doting owners – but the resemblance is not just limited to appearance, as the pets act like them too.

There are links between some of the UK’s most popular breeds and the dominant personality traits shown by their owners, according to a study from The Kennel Club.

Those who have border terriers are likely to be charming, lively and exuberant, while Staffordshire bull terrier fans are trustworthy and the most affectionate.

Jack Russell owners, such as King Charles and the Queen Consort, are the most loyal and faithful, with 88 per cent of them displaying these traits.

Those with cocker spaniels, like the Prince and Princess of Wales, top the list for being the most curious, creative and family-orientated.

Owners who ranked most emotionally stable, stating they were positive and happy, had Golden Retrievers, like Joe Jonas and Sophie Turner.

There are links between some of the UK’s most popular breeds and the dominant personality traits shown by their owners, says a study from The Kennel Club 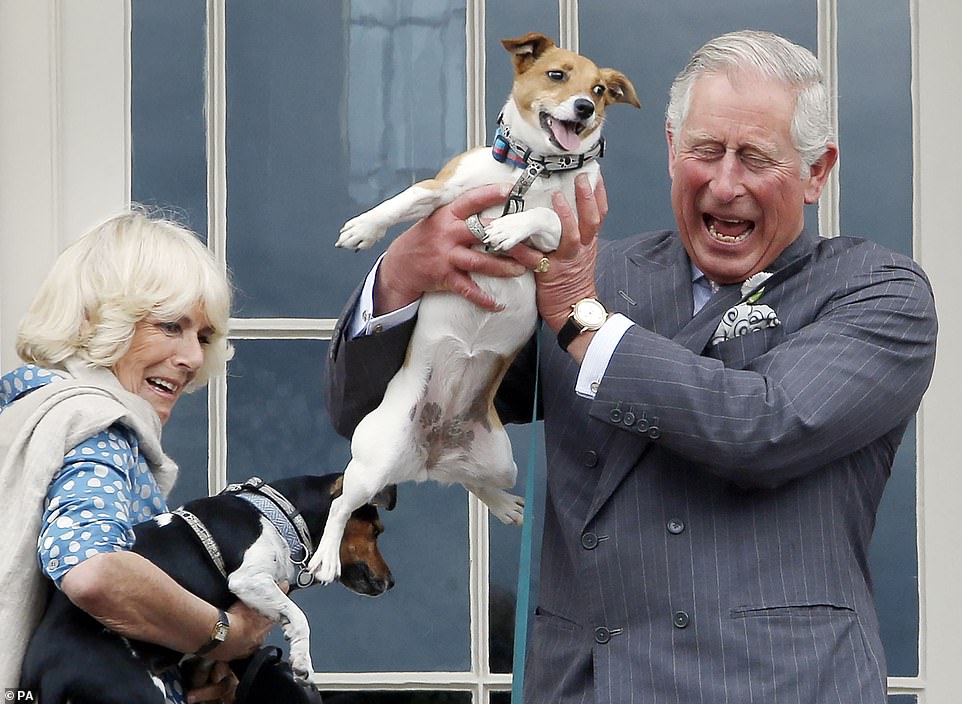 Jack Russell owners, such as King Charles and the Queen Consort, are the most loyal and faithful, with 88 per cent of them displaying these traits

WHAT YOUR DOG’S BREED SAYS ABOUT YOU

For the research, more than 1,500 current and past owners of 16 popular breeds were ranked against personality statements.

The researchers then could see which owners ranked most highly for certain personality traits when compared to those who own other breeds.

Jack Russells are known for being friendly dogs, and are a popular choice among celebrities including Rick Stein, Serena Williams, and Paul McCartney.

The study results revealed that the top five most dominant personality traits that defined Jack Russell owners are:

Bill Lambert, spokesperson for The Kennel Club which runs the Discover Dogs event, said: ‘It appears that we can often tell a lot about a person from the type of dog that they own, with the dominant personality traits of Jack Russell owners – owned by the likes of King Charles – being their loyalty, generous spirit for helping others and their trustworthiness.’

Oprah Winfrey, Charlize Theron and the Prince and Princess of Wales are all fans of Cocker Spaniels and are regularly photographed with their dogs by their sides.

According to the study, owners of this breed are:

From Andy Murray to Diane Keaton, Border Terrier is a popular breed with many celebrity dog owners.

Border Terriers are ‘essentially working terriers’, according to The Kennel Club, requiring just one hour of exercise a day and living for an average of over 12 years.

The study results suggest that this breed will be best suited to you if you’re charming, lively and exuberant.

The Springer Spaniel is the most popular of the spaniels breeds, with celebrity fans including Tilda Swinton, Marilyn Monroe and Prince Harry.

‘The Springer Spaniels earned their name by their practice of “springing” forward to flush the game into nets. After the invention of guns, the breed was used to flush game from undergrowth,’ The Kennel Club explains.

According to the study, people who are best suited to Springer Spaniels tend to be traditional, reserved and punctual. 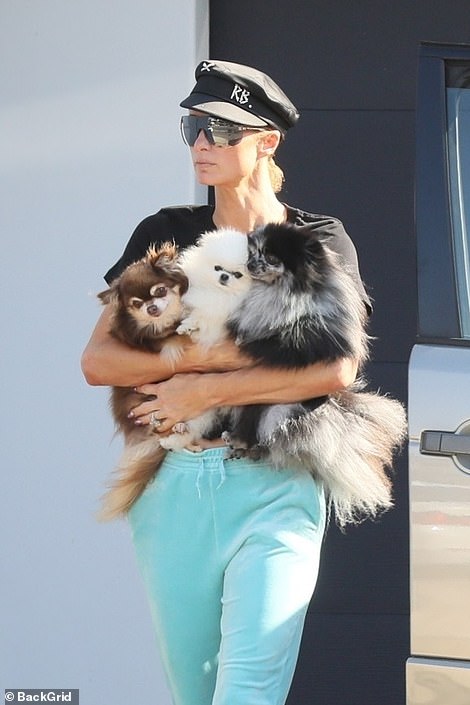 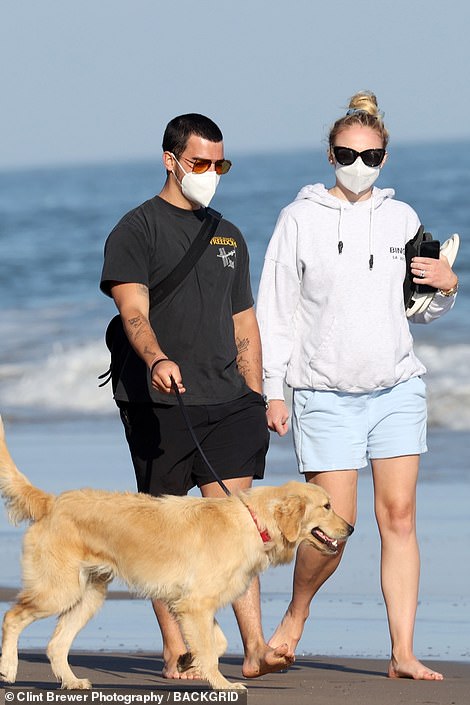 Pooch owners who ranked the most highly on traits relating to agreeableness and extroversion, and came out on top overall across the Big Five, had Pomeranians, like Paris Hilton (pictured left). Golden Retrievers are known to be happy in temperament, and their owners, liked Sophie Turner and Joe Jonas (pictured right), ranked as the happiest and most positive compared to owners of other breeds 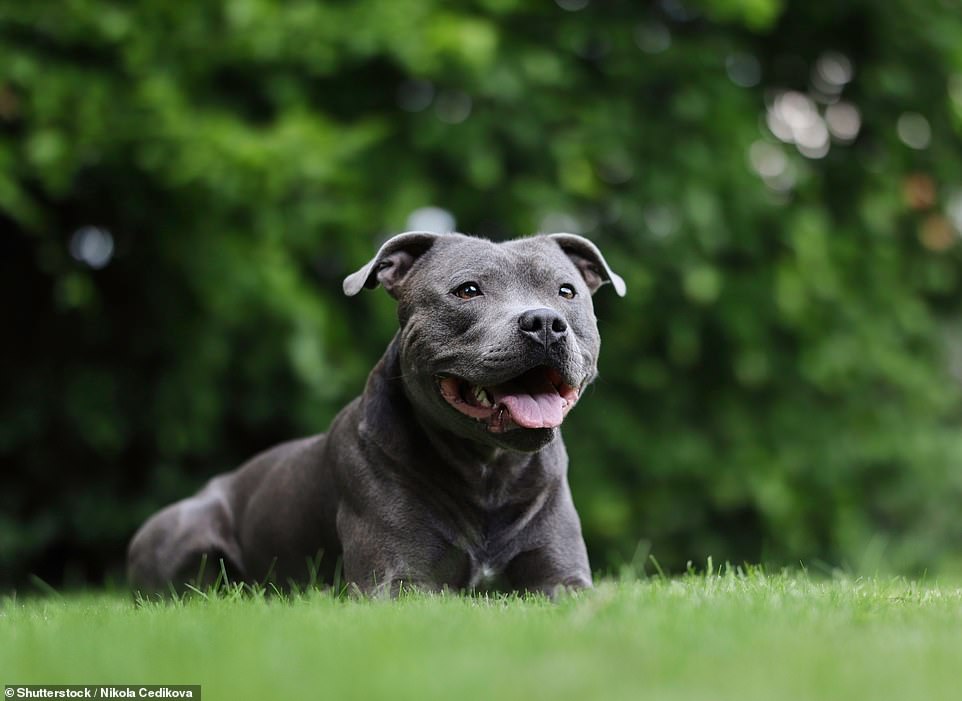 Staffordshire bull terriers have affectionate personalities, much like their owners who ranked as the most affectionate in teh study (stock image)

Which breeds are brightest?

WebMD reports that the following are the most naturally intelligent dog breeds:

First developed as a fighting dog, the Staffordshire Bull Terrier is often perceived as a breed to be feared.

However, Staffies are actually very affectionate dogs, and have even been nicknamed ‘nanny dogs’ because they’re known for being so playful and patient with children.

According to the study, owners of Staffordshire Bull Terriers tend to be affectionate and trustworthy.

The Kennel Club’s study found that owners of Miniature Schnauzers are loyal, faithful, conscientious, organised and sticklers for rules.

Whippets are excellent family dogs, known to be gentle and affectionate and to enjoy the comforts of domestic life.

The study found that those who enjoy new experiences, have lots of hobbies and enjoy taking risks are best suited to this breed.

The Golden Retriever is one of the most popular dog breeds in the UK and US, with celebrity owners including Jackie Chan, Conan O’Brien and Nick Jonas.

The breed is known for its friendly, tolerant attitude which makes it well-suited as a family pet, while its intelligence makes it a highly capable working dog.

According to The Kennel Club study, people who rank more emotionally stable and are positive and happy are best suited to Golden Retrievers. 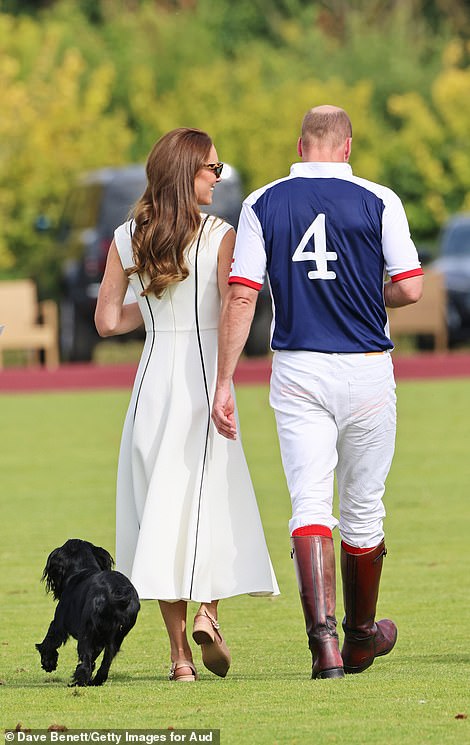 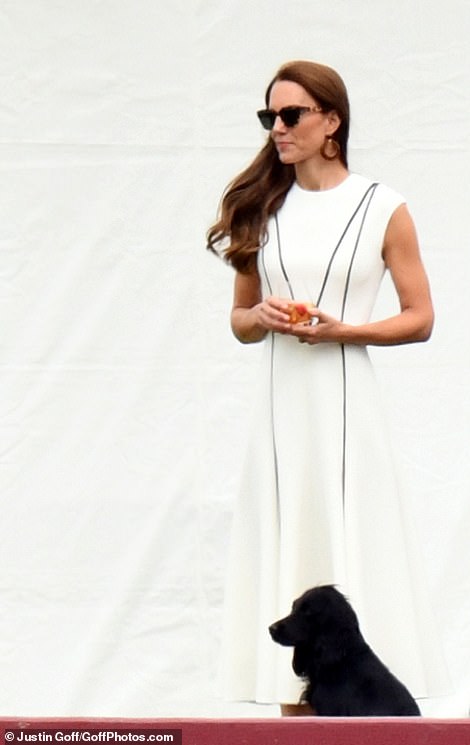 Those with cocker spaniels, like the Prince and Princess of Wales, pictured with dog Orla, top the list for being the most curious and family-orientated

Weighing just 7.7lbs (3.5kg) and measuring just 11 inches tall, Pomeranians are some of the most popular small dog breeds.

‘The breed was first seen in the UK in 1870 and became a great favourite of Queen Victoria whose dogs were exhibited at dog shows in London,’ the Kennel Club explains on its website.

‘Royal patronage played no small part in popularising the breed, aided by its dainty appearance and extrovert character.’

People who are most passionate, creative and free-spirited are best suited to this breed, according to the study.

Drew Barrymore, Anne Hathaway and Arnold Schwarzenegger are all fans of Labrador Retrievers.

‘The Labrador is the most popular of all pedigree breeds and his popularity comes from his versatility as family companion, service dog, guide dog as well as a working gundog,’ The Kennel Club said.

If you’re a friendly person, a Labrador could be the perfect choice for you, according to the study.

With their long bodies and little legs, it’s no surprise that Dachshunds are some of the most popular dogs in the UK.

‘Originating in Germany where he is known as the Teckel (badger dog) the Dachshund, is still used for both tracking wounded game such as deer, and for going to ground after badger or rabbits,’ The Kennel Club explains.

‘In his native country there are three sizes: standard, miniature and Kaninchen (rabbit dog) all defined by measuring the circumference of the chest.’

According to the study, the most dominant trait among daschund owners is trustworthiness.

Jennifer Aniston, Ben Affleck and Cameron Diaz are all fans of German Shepherds.

‘The first breed club was formed in 1881 after Max von Stephanitz and his followers developed and promoted the breed as a herding dog, and later as a working dog used by the police and the armed forces,’ The Kennel Club said.

‘From the First World War the bravery and temperament of the German Shepherd has gained the breed worldwide recognition and praise and he has shown his worth in other disciplines too:- as a guide dog for the blind, as a tracking dog, and in obedience.’

The study found that German Shepherd owners are most likely to help others.

Small enough to fit in a handbag, it should come as no surprise that Chihuahua is one of the most popular breeds among celebrities – most famously, Paris Hilton.

According to The Kennel Club study, chihuahua owners’ most dominant trait is trustworthiness.

How man has changed his best friend: Experts reveal what dogs USED to look

Shocking images have revealed what dogs used to look like, amid warnings that breeds like pugs and French bulldogs are being cruelly overbred for fashion.

From German Shepherds to Basset Hounds, many breeds have changed dramatically following years of selective breeding.

Boxers have been bred to have shorter faces with a larger mouth, while dachshunds’ backs and necks have stretched out and their legs have shrunk to a point that makes it difficult for them to manoeuvre over obstacles a few inches off of the ground.

Meanwhile, pugs have been bred to have squashed noses and big eyes, which puts them at high risk for a range of health conditions, including breathing, eye and skin disorders, according to a new study.

‘The extreme characteristics many owners find so appealing, such as squashed faces, big eyes and curly tails, are seriously compromising pugs’ health and welfare and often result in a lifetime of suffering,’ explained Justine Shotton, British Veterinary Association (BVA) President.

‘While these extreme, unhealthy characteristics remain, we will continue to strongly recommend potential owners do not buy brachycephalic breeds such as pugs.’ 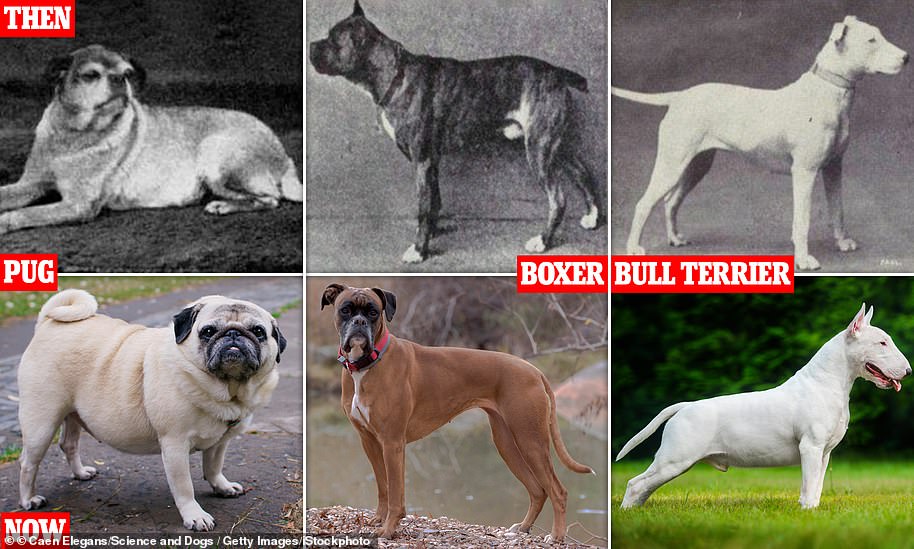 Pugs have been bred to have squashed noses and big eyes, while boxers have shorter faces with a larger mouth, and bull terriers have mutated to have a warped skull and thicker abdomen

Calculate how much more mortgages will cost if interest rates rise