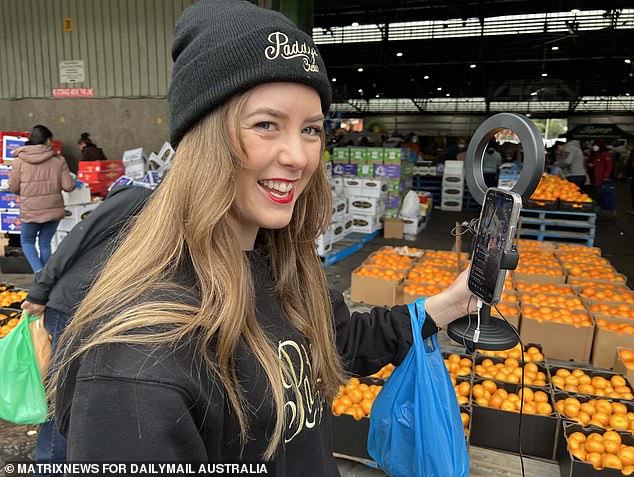 Australia is teetering on an economic tightrope of doom or boom as shockwaves from the global fallout from Covid and Russia’s war on Ukraine rock the nation.

The country is reeling from multiple blows as food, fuel and power prices soar,  families struggle to buy a home and dozens battle over every rental property.

But economists insist the pain is the point – and shows the fight against inflation is working…although it may still get even worse before it gets better.

They say it has to hurt to help, and consumer spending needs to be curtailed to set the economy up for recovery – and then the rebound back to normality. 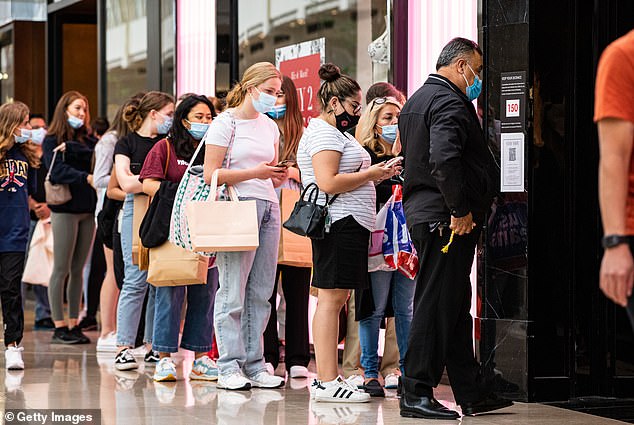 Rising food prices have been caused by a perfect storm of extreme weather events, increased fuel and power prices linked to the war in Europe as well as Covid-related supply chain issues

‘Cost of living pressures are squeezing consumers but ultimately this will readjust,’ said Professor Tim Harcourt, chief economist at University of Technology Sydney.

Londoner Ryan King, 25, was shellshocked when he was charged $61.90 for a handful of basics like bread, fruit, chicken and vegetables at a Melbourne supermarket.

‘I’ve not got a huge amount of stuff,’ he said on TikTok. ‘I would normally get more meat, maybe like rice, pasta, potatoes and dips and sauces. So this might be like 60 percent of a food shop.

‘If any Australians are watching and have any hacks on how to get better or cheaper food, please let me know as this is quite expensive.’

It comes as visitors to Australia are shocked by the price of basics, with even ‘cheap’ beer costing $10 during happy hour – while a shopping basket of just basic necessities runs up a $60-plus bill.

Rising food prices have been caused by a perfect storm of extreme weather events, increased fuel and power prices linked to the war in Europe as well as Covid-related supply chain issues.

Federal and state government are desperately trying to find a way to make homes affordable for first time buyers, with moves to scrap stamp duty and even shared government ownership of homes in a bid to bring them back within the reach of young families.

But that has triggered new levels of madness in the rental market – with one real estate firm asking prospective tenants to offer bids about just how much rent they’re prepared to pay to secure a lease.

Meanwhile interest rates have continued to rise as inflation soars to record highs, pushing up the price of everything.

Now though economists believe Australia is finally on the verge of turning the corner.

Internal CBA data shows food price increases halved from a staggering 14 per cent in September down to 7.4 per cent in October, spurring hopes of a rapid return to normal. 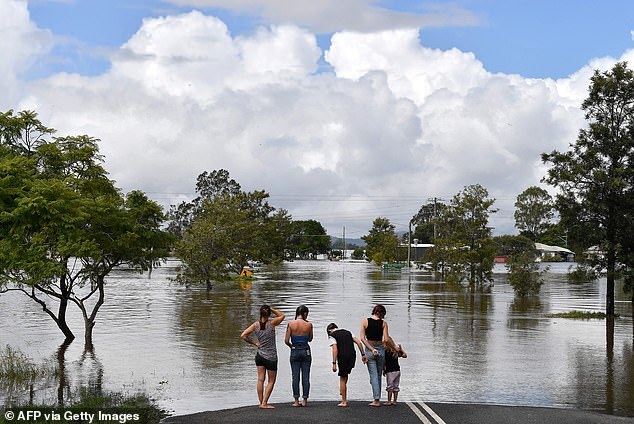 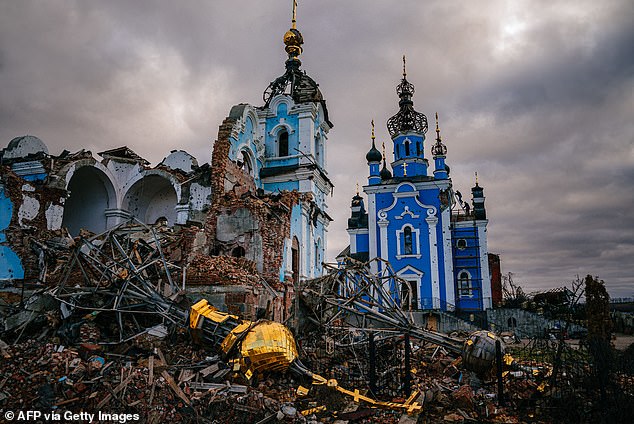 But one false step could plunge the country into a recession, along with the US, UK, Japan and Europe, warns Commonwealth Bank’s chief economist Stephen Halmarick.

‘2023 looks like it is going to be a critical year,’ he told Daily Mail Australia.

‘The global economy is expected to experience a central bank-created recession, the first of this type for a number of decades.

‘2023 is sure to create both challenges and opportunities for many.’

Mr Halmarick says the nation is set to pivot from ‘today’s problem’ of clamping down on high inflation to ‘tomorrow’s problem’ of a potential recession.

But he believes Australia is well positioned to beat the global trend and escape the downturn.

HOW DID WE GET HERE?

The global economy has been hit by two horsemen of the apocalypse – war and plague – creating an Armageddon challenge for governments.

Covid caused a massive downturn in productivity globally, with lockdowns keeping people from work and forcing many businesses to the wall.

Many nations, like Australia, responded with huge stimulus packages costing tens or even hundreds of billions of dollars to keep companies alive and people in jobs, while spending billions more on public health.

But those huge sums now need to be repaid – with government spending curtailed in a bid to recoup the cash, and interest rates rising to stop the spending splurge by consumers.

Further targeted lockdowns and repeated cycles of mass outbreaks also brought industry to a grinding halt, creating supply chain issues which have had international consequences and further delaying the return to normality. 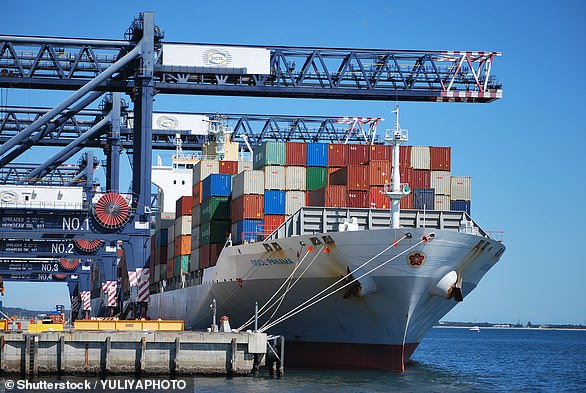 Australia’s trade war with China has also hampered economic growth with the nation’s number one trading partner now off limits for several key markets, including coal, barley, wine and lobster.

Russia’s war on Ukraine was the final nail in the coffin for the global economy.

Russia and Ukraine were key suppliers of crops and fuel to Europe and have been badly hit by President Vladimir Putin’s invasion.

As well as global shortages of basics like grains and vegetable oil, it’s had a huge impact on fuel and power prices worldwide.

Russia’s gas exports have mostly been cut off by sanctions, sending power bills soaring in Europe, and impacting Australia too where our gas can be more profitably sold overseas than used locally. 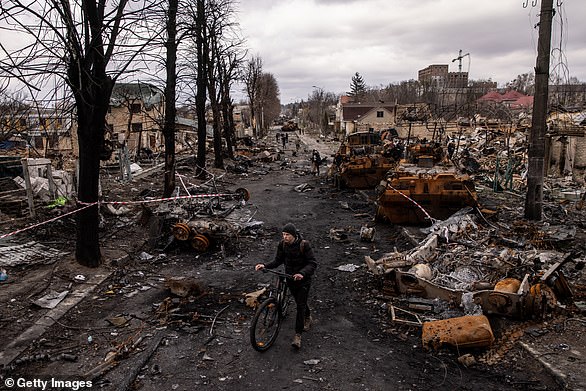 With economies over-stimulated and the increased cost of crops, fuel, power and freight distribution, and a limited workforce susceptible to new Covid strains, as bank struggle to fight inflation,  the world economy has tanked in a way not seen in decades.

The question now is how long will the rebuild take – and when does it start. For Australia at least, the end of the misery could possibly be in sight. 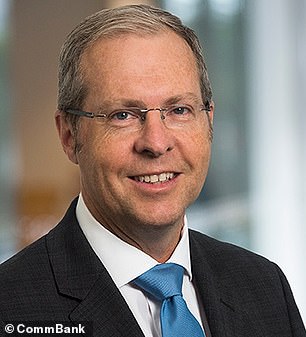 Commonwealth Bank’s chief economist Stephen Halmarick predicts Australia will dodge recession, unlike the US and UK

Mr Halmarick predicts the UK, US, Eurozone and Japan are all headed into recession this year – where the economic yardstick of gross domestic product growth is negative for two quarters or more – as part of a global financial crunch.

Australia could dodge the doomsday scenario though – and his analysis models the local economy likely to grow in 2023, albeit by just 1.8 per cent, with wages rising by 3.5 per cent on average.

Prof Harcourt agrees, and believes the war in Ukraine could benefit Australia, driving up exports of crops like wheat normally sourced from the war-torn nation. 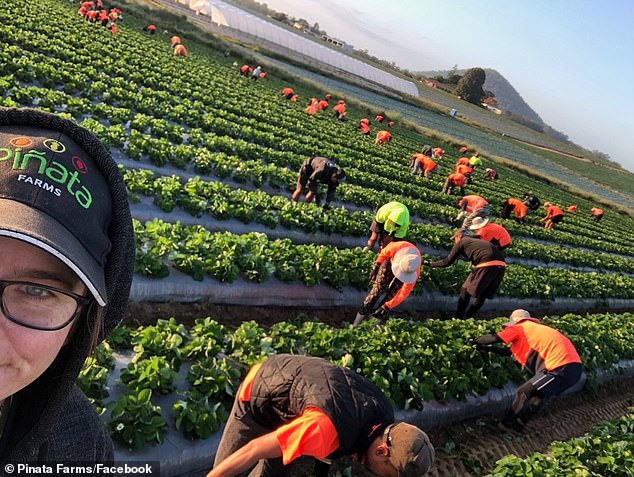 The war in Ukraine could benefit Australia, driving up exports of crops like wheat normally sourced from the war-torn nation 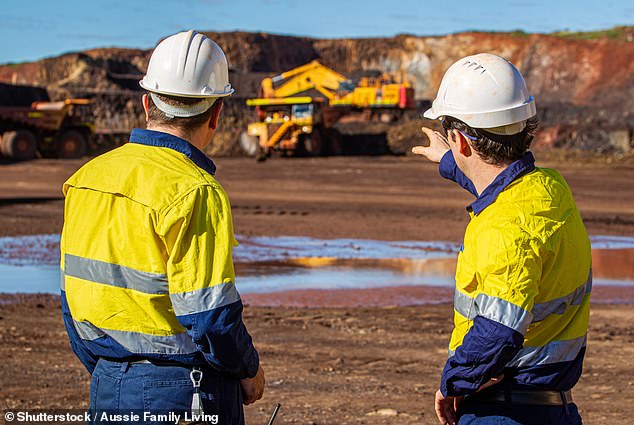 A real estate agency listed a four-bedroom, three-bathroom home in Wembley, in Perth’s east, seeking ‘offers from $1200 per week’ as the rental madness hit new heights.

State government have attempted to stamp the practice out but Real Estate Institute of Western Australia president Joe White doesn’t believe a ban is the solution.

‘We have a housing shortage — the solution to getting a balanced market in this region is just more housing,’ he said.

‘The ones that are under construction at the moment, caught in the building bubble, we have to do whatever we can to get those through the system so we can get a more balanced market.’

Coupled with the easing restrictions on China’s trade war with Australia – which could see renewed exports of coal and minerals – he believes the future is bright.

He predicts Australia could enjoy both a mining and dining boom on the back of its rocks and crops.

‘Australia like all nations is facing cost of living pressures related to China’s Covid lockdown and the knock-on effects on global supply chains,’ he told Daily Mail Australia.

‘But we have a few things going for us, namely exports of rocks and crops.

‘Our neighbours to the near north – Japan, South Korea and China need energy and the world needs our agricultural exports due to the Russia Ukraine war.

‘We will experience as much a dining boom as a mining boom.’

Australia’s inflation rate is currently ranked 14th lowest among the industrialised G20 nations – behind the US, India, Indonesia and Brazil –  and 71st worldwide.

But analysts believe inflation has peaked, or close to peaking, at the current 7.3 per cent and will soon begin to fall, with Mr Halmarick expecting it to be around 3.4 per cent by the end of the year, and back between 2 to 3 per cent in 2024. 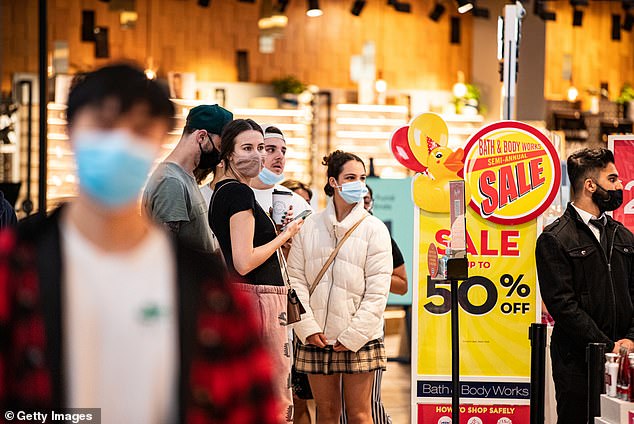 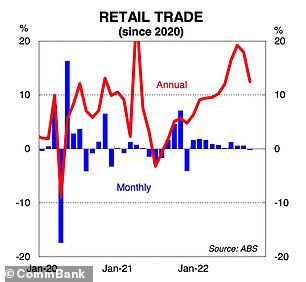 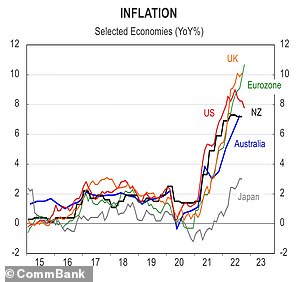 Graphs reveal how Australia’s retail trade has had a rollercoaster ride since Covid broke out in early 2020, while inflation has surged locally, but even more so in other major nations

As a result, he believes the Reserve Bank will end its streak of increasing interest rates, with perhaps one last rise next month before a pause and then a series of cuts. 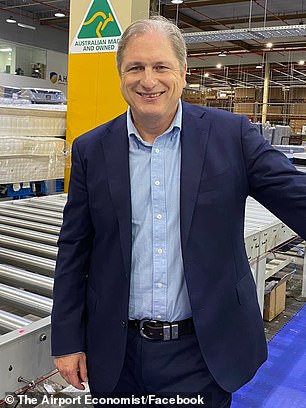 ‘By the time we get to early February 2023, there will be enough evidence that the RBA does not need to tighten monetary policy any further,’ he said.

‘With the housing market already turning down, consumer spending softening and inflation expected to peak, we expect the RBA is close to the end of its monetary policy tightening cycle.’

Prof Harcourt added: ‘As the global economy slows, the Reserve Bank of Australia is also likely to ease the pressure on interest rates.’

With the squeeze now well underway, house prices nationally have fallen 7 per cent and the CBA believe they will eventually fall 15 per cent before they start to recover. 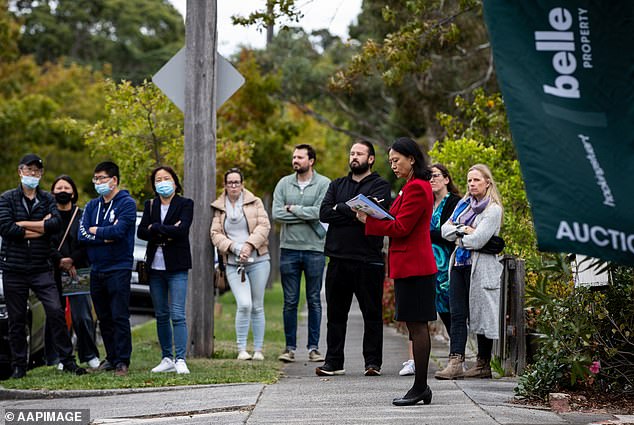 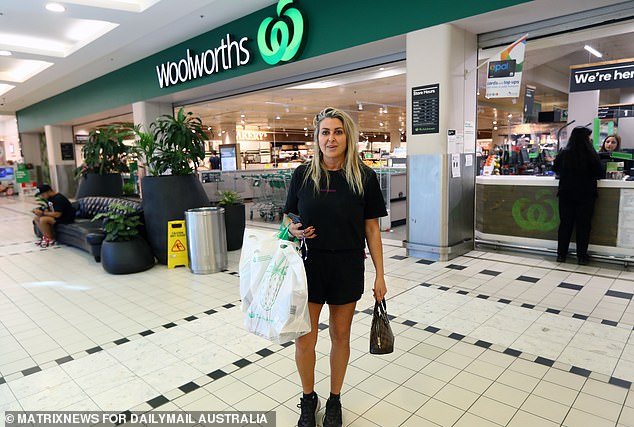 Commonwealth Bank chief economist Stephen Halmarick believes  Australia is set to beat the global trend and escape recession, with inflation dropping to two to three per cent next year

Globally though, Mr Halmarick warns the conditions are ripe for something substantial to ‘break’ badly in the global financial markets – which could change everything, he says.

An Aussie stuck overseas for three years by Covid was shocked by the price of basics in Australia on his return – including being charged $10 for a basic beer…in happy hour.

‘Everything is about double the price,’ he wrote on Reddit. ‘Some things are just laughably, outrageously expensive.

‘I know wages are fairly high here but… not that high?’

‘The risk of something “breaking” is high,’ he said.

‘Interest rates are higher than many have experienced in their working lives, economic growth is weakening, increased market volatility, heightened geopolitical risk around the world and ongoing and increasing effects of climate change.

‘Perhaps the best recent example is in the UK when former Prime Minister Liz Truss tried to ease fiscal policy, through increased use of debt, at the same time the Bank of England was tightening monetary policy.

‘As we know, the bond market was having none of that – and the rest is history.’

He added:  ‘This pivot in monetary policy and the global economic slowdown is expected to have a significant impact on financial markets.

‘The potential is there for a strong rally in bond markets and an eventual shift in the strong US dollar trend.

‘[But] there is also the risk of something ‘breaking’, with recent developments in crypto markets a good example, while market volatility is likely to remain elevated.’

He believes Australia could emerge stronger from the chaos though.

‘We would advise caution as 2023 unfolds,’ he said.’But it is also worth noting that volatility and change often brings opportunity.

‘For many businesses and investors in Australia, 2023 could present some great opportunities, especially if the process of creative destruction is allowed to occur.’